This BOTW is rejuvenated from a 2008 episode.

If you look up “Icky-bug” in an insect book, it will not lead you to this beetle, nor anywhere else, for that matter. In their youths, the BugLady’s sisters had huge (HUGE) aversions to these blameless beetles. Consequently, the BugLady was sometimes compelled to put a few beetles in little boxes and gift her sisters with them, enjoying the resulting agitation (acts for which, alas, she feels no remorse).

“Icky-bugs” are actually Click beetles (family Elateridae), a.k.a snapping beetles or skipjacks. About a tenth of the world’s 9,300 species live in North America, occupying most habitats except very cold and very wet ones, and deserts. Their elytra (hard wing covers) are grooved and pitted lengthwise and are often covered with slippery scales, and the long, slim shape is typical of the family. The CBs of the BugLady’s youth were generally all-brown/all-black and maybe ½” to ¾”, but she has photographed some two-toned CBs, including (badly) a bright red and black individual (possibly Aeolus mellilus), and the awesome Eastern Eyed Elater. 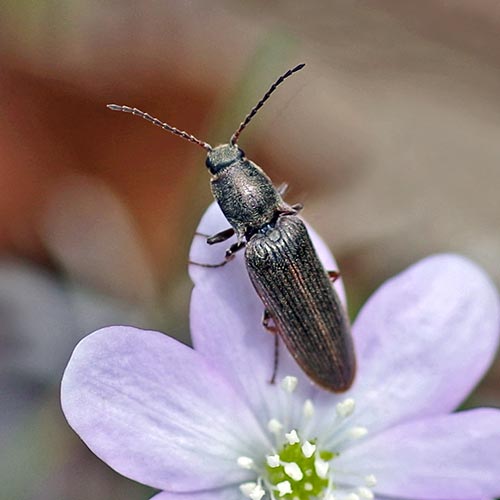 CBs tend to be nocturnal (except in cool climates, when they are abroad during the heat of the day), and they’re attracted to lights at night (often entering houses). In the tropics, some CBs use bioluminescence, like lightning beetles, making their own light as both adults and larvae; in this neck of the woods, they communicate via touch and smell.

The hard-coated click beetle grubs, which may spend four or more years in that stage, are sometimes called “wireworms” (especially the larger species); they live in soil or rotten wood or under bark. Wireworms of the genus Melanotus enjoy eating corn, potatoes, grains and turf grasses (they are said to locate plant material in the soil by homing in on the carbon dioxide gradients as they travel about in tunnels made by other critters)(though they are perfectly capable of digging their own tunnels). Some species of wireworms are important predators on agricultural pests in the soil; adults typically eat plant material but are not considered pests. Moles, shrews, insectivorous birds, spiders and mantises are among their predators. CBs overwinter as larvae or as adults. 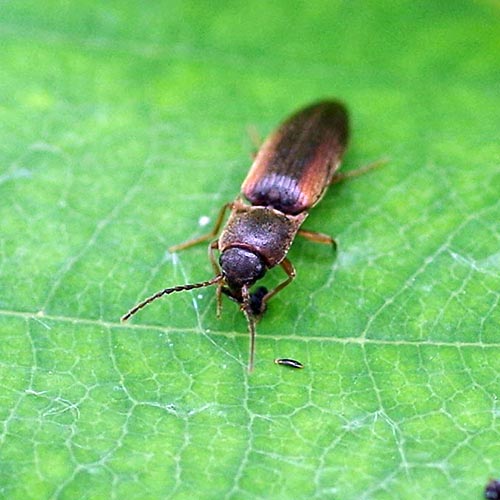 To right itself, the click beetle first “arches”, then suddenly curls, and with an audible “click,” snaps the spur into the groove, which somersaults it into the air. In his Field Guide to Insects of North America, Kaufman says that they are also called “jackknife beetles.” The BugLady totally does not get the physics of this trick (the opposite arrangement—that the spring would be caused by the sudden release of the spine rather than by its sudden engagement—seems more plausible), but she accepts it, like pole vaulting, because the results are inarguable. 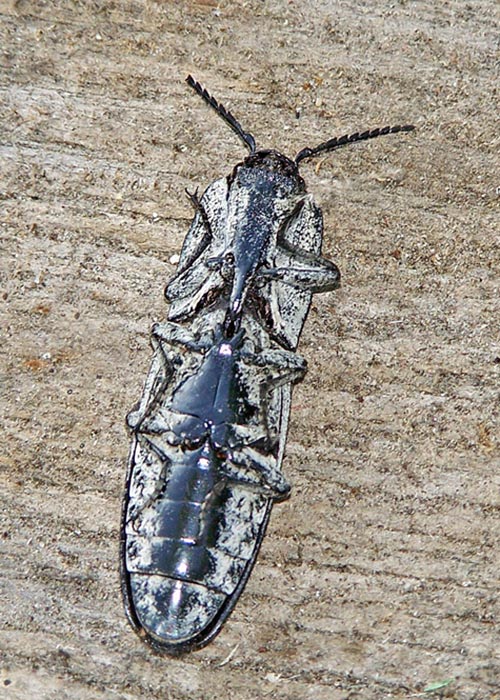 At any rate, the trick is used to get right-side-up as well as to escape from predators (which will often drop an EE that performs a vigorous “click” while in-hand/beak). Sometimes an EEE will launch itself into flight during the arc of its leap; more often it returns to earth, where it may tuck in its legs and play possum until its predator moves on.

The impressive Eastern Eyed Elater or Big-eyed click beetle (Alaus oculatus) fell onto a burdock leaf as the BugLady mowed the grass nearby. According to bugguide.net, there are six Alaus species in North America, one, appropriately named Alaus myops. An EEE measures an inch-and-a half long +, and an energetic “click” can send it several inches in the air (the BugLady has seen small EEs propel themselves six or more inches into the air). Yes, it can fly. Its spectacular “eyes” and mottled white speckles are said to provide good camouflage, and the false eyes are designed to terrify predators. It feeds on nectar. EEEs are found in woodlands throughout North America and well south into Central America. 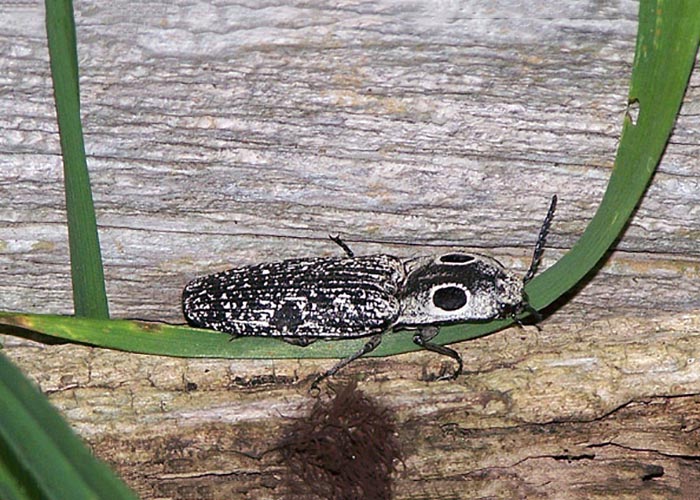 The equally-impressive EEE Junior hatches from eggs laid in the soil and lives in dark, damp, decaying wood. It uses its powerful jaws (which are described as looking like crab legs, and we are warned to handle with care!) to first tear/dismember and then to eat the other insect larvae it finds there, especially Cerambycid larvae (long-horned beetles). It may live as long as five years as a larva, and as the good folks of the Galveston Master Gardeners say in their Beneficial in the Garden EEE biography, “all the longer to do its good works.” They describe its feeding, thus: “the Eyed Elater larva is ferocious meat-eater that dines on many other noxious larvae, including those of wood-boring beetles, flies, and other undesirables.”

Odd EEE factoid courtesy of Arthur V. Evans in Beetles of Eastern North America: the adults “are sometimes attracted to solvents and freshly-painted surfaces.” In his Bugeric blog, entomologist Eric Eaton explains that these aromatic scents are reminiscent of the odor of freshly cut trees.