Neuropathic pain (NP) is difficult to treat chronic pain occurring in about 7% of the US population. Opioids are currently the leading NP therapeutic choice, but their use is controversial. Nearly two million Americans abuse or are dependent on prescription opioids (2014 data) and from 1999-2016 more than 200,000 deaths resulted from prescription opioid overdoses. NP is commonly associated with diabetic neuropathy, post-herpetic neuralgia, cancer and HIV infection; which can arise without overt stimulation of associated peripheral sensory endings. Additional treatments include tricyclic antidepressants, serotonin-norepinephrine reuptake inhibitors, and anti-epileptics, which are often followed by second-line opioids and topical drugs or third-line strong opioids. Yet, patients often gain minimal benefit from these drugs and are exposed to serious side effects, drug tolerance, and addiction risks. Thus, an unmet medical need exists for effective, non-opioid analgesics with better safety profiles in NP treatment.

An increasing body of research implicates neuro-inflammation in many central nervous system (CNS) disorders, including NP. Microglia, resident macrophages of the CNS, are mediators of neuro-inflammation and present a compelling cellular target for NP drug discovery. Importantly, functional gamma amino butyric acid type A receptor (GABAAR) subtypes, which are well-characterized in neurons, have also been identified in macrophage/microglia cell types and lymphocytes and can mediate immune suppressive signaling. Using a mouse and human microglia cell line, the Arnold Group investigated the reduction of nitric oxide (NO), which is release during nerve injury and contributes to allodynia, hyperalgesia, and nociception. In vitro, NO is secreted by microglia in the presence of interferon gamma (IFNγ) and E. coli lipopolysaccharide (LPS). More than 50 benzodiazepines and imidazodiazepines synthesized by the Cook Group were screened in vitro leading to the identification of imidazodiazepines oxadiazoles. This compound class showed good structure activity relationship and lead compounds MP-IV-010 and GL-IV-03 were identified. However, further investigation with GABAAR antagonists flumazenil, picrotoxin, and bicuculline demonstrated that GABAARs were not linked to the NO reduction. A screen of 48 receptors identified the κ-opioid receptor and to a lesser extent the μ-opioid receptor as molecular targets, with opioid receptor antagonist norbinaltorphimine reversing benzodiazepine induced reduction of microglial NO. Functional assays identified the downregulation of inducible NO synthase as the mode of action of imidazodiazepines MP-IV-010 and GL-IV-03.

The antinociceptive effect of GL-IV-03 was demonstrated with the formalin test. Paw injections of formalin elicited a biphasic pain response separated in time (1−5 min and 20−60 min). Licking and biting of the injured hind paw as a demonstration of nociception was evaluated in comparison to the uninjured contralateral paw. GL-IV-03 exhibited antinociceptive effects in both acute pain (phase 1) and inflammation mediated pain (phase 2) when administered orally at 10 mg/kg. The effect was similar to nonsteroidal anti-inflammatory drug ketoprofen at 30 mg/kg. Sedation and inhibition of sensorimotor coordination can influence licking and biting pain behaviors, prompting rotarod studies for GL-IV-03 and MP-IV-010. Oral and IP administration at 4-fold the effective dose in the formalin test did not cause any sensorimotor deficits as measured on the rotarod. In contrast to diazepam, a benzodiazepine with high affinity for the α1β2/3γ2 and other GABAAR subtypes, was sedating at 5 mg/kg.

The LD50 values for GL-IV-03 and MP-IV-010 was higher than 100 µM for liver HepG2 and kidney HEK293 cells. The highest dose investigated in mice was 50 mg/kg/day for 17 days exhibiting no adverse effects. 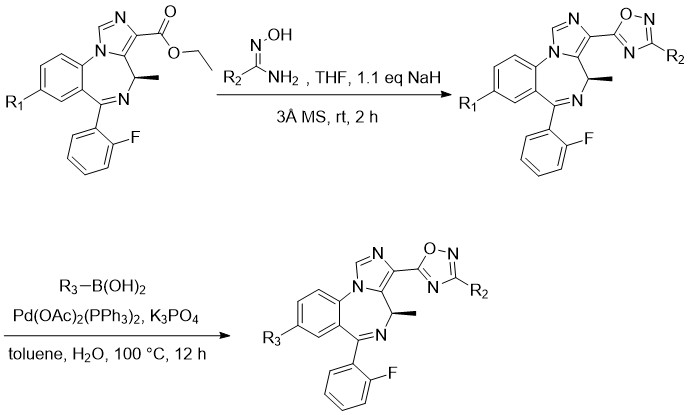 Large scale manufactory was demonstrated for SH-I-047 using a N-carboxyanhydride of d-alanine. The formation of the SH-053-2F’-R-CH3 using a palladium catalyzed reaction has been reported. The formation of the oxadiazole using the corresponding oximes occur in high yield. GL-IV-03 can be prepared from GL-III-98 with a Suzuki reaction.