Pharmacological interventions that prevent or delay memory loss associated with aging would substantially improve quality of life for affected individuals, increase their productivity, and decrease the health care costs for those with memory loss and dementia. Memory deficits are common to aging and neurodegenerative diseases like Alzheimer’s disease. Because the U.S. population is rapidly aging, the incidence of memory dysfunction will increase exponentially. Although memory dysfunction is a significant impediment to independent living and diminishes workforce productivity, few treatments effectively prevent or reverse memory impairments. Thus, there is an urgent need for new treatments to alleviate memory dysfunction in aging and neurological disorders. An extremely promising avenue for such treatment is the use of histone deacetylase inhibitor drugs (HDACis).

Histone acetylation is a prominent epigenetic modification linked to the memory loss symptoms associated with aging and neurodegenerative disease. Histone acetylation promotes gene transcription, which is required for the formation of long-term memories. Thus, compounds that maintain histone acetylation, called histone deacetylase inhibitors (HDACi), are promising therapeutics to treat memory loss associated with aging and neurodegenerative disease. However, use of existing HDACi for the treatment of central nervous system disorders is precluded by their weak blood-brain barrier permeability and undesirable toxicity. Thus, the goal of this project is to test the effects of novel, non-toxic HDACi compounds on memory formation in a well-established mouse model of memory formation.

To address these shortcomings, Dr. Hossain’s group have developed a new class of disulfide-based compounds, inspired by the scaffold of the FDA-approved HDACi FK288 (Romidepsin). Although FK228 was found to be highly potent against certain malignancies, it shows high cytotoxicity and very low blood-brain barrier (BBB) permeability, highlighting its drawbacks in clinical applications for neurodegenerative diseases. We hypothesize that certain designer small compounds inspired by the FK228 scaffold may possess more “drug-able” properties, such as increased solubility, decreased toxicity, high brain uptake upon i.p. administration, and yet adequate potency on memory formation. Therefore, we set out to design small HDACi that are structurally derived from FK228 by following the typical pharmacophore model.

To study the effects of our analogues on cell proliferation and histone acetylation, both MTT (3-(4,5-dimethylthiazol-2-yl)-2,5-diphneyltetrazolium bromide) and immunofluorescence microscopy, respectively, were performed using DU145 prostate tumor cells in Dr. Steeber’s lab. Initial studies tested multiple analogues of our novel HDAC inhibitor in cell proliferation assays. FK228 was used as a positive HDACi control. Among all the compounds tested, only MJM-1 inhibited the growth of DU145 tumor cells in a dose-dependent manner. Specifically, treatment of DU145 tumor cells with 50µM of MJM-1 significantly reduced proliferation by ~50% and by ~80% when treated with 100 µM compared to DMSO control.

Later on, the acetylation levels of histone H3 were assessed using immunofluorescence microscopy after 24 h of treatment with either DMSO only, 25 µM, 50 µM, or 100 µM MJM-1, or 10 nM romidepsin. Acetylation levels of histone H3 showed a dose-dependent increase following MJM-1 treatment in DU145 tumor cells. The effect of MJM-1 on the activity of recombinant purified HDACs was also compared with romidepsin.  Despite being less potent, MJM-1 inhibited all HDACs including those not in class I. 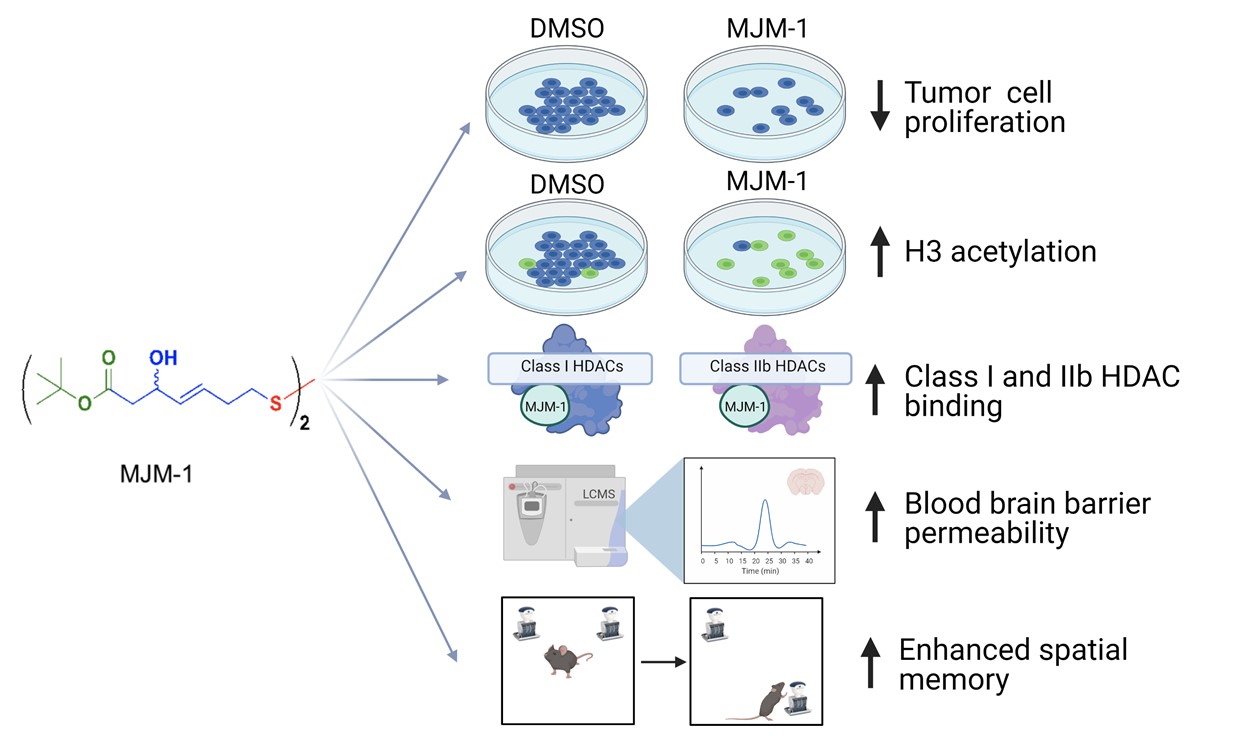 To determine the MTD in vivo, escalating doses of MJM-1, romidepsin and SAHA were injected i.p. into BALB/c mice, and morbidity and mortality were monitored over two weeks. Romidepsin showed very high toxicity, with the animals only being able to tolerate doses of 3.125 mg/kg. By contrast, MJM-1 had an MTD of more than 200 mg/kg which was similar to that of SAHA, suggesting that both MJM-1 and SAHA are much less toxic than romidepsin.

Based on the promising anti-HDAC activity in the DU145 prostate cancer cell line and the high maximum tolerated dose, we decided to investigate the in vivo detection of MJM-1 in blood, liver and brain in BALB/c mice. After i.p. injection of 40 mg/kg MJM-1, blood, liver and brain samples were collected at three different time points (10, 30 and 60 minutes). The collected samples were analyzed by mass spectroscopy and MJM-1 was detected in all samples. Because the hippocampus region of the brain is responsible for many aspects of memory formation, we further investigated the accessibility of MJM-1 to the hippocampus. MJM-1 was administered i.p. at two different doses (20 or 40 mg/kg), to determine the optimal dose range for subsequent memory assessment. For both 20 mg/kg and 40 mg/kg dose, MJM-1 was detected after 10 minutes of injection in hippocampus. From the data observed, it can be concluded that MJM-1 can penetrate the BBB and diffuse into the hippocampus rapidly after i.p. administration.

Although compound MJM-1 was proven to be an effective HDAC inhibitor that showed potent antitumor activity and memory enhancement, its inhibitory activity required comparatively high concentration, as well as its activity, is not restricted to certain HDACs, which remained to be further improved. Thus, further optimization studies were focused on achieving the balanced activity toward the target and improving the in vivo efficacy. Based on the binding mode of the parent compound, classical pharmacophore (Zinc Binding group, ZBG; hydrophobic linker; and cap) pieces for HDAC inhibitors were focused for SAR (structure-activity relationship) studies.

To investigate the structure-activity relationship of MJM-1, we first performed the separation of enantioselective isomers of MJM-1 via chiral preparative HPLC to examine the isomeric effect on activity. For lead identification and creation of better and novel HDAC inhibitors, we later focused on synthesizing analogs having different functional cap groups to make them more stable and less prone to hydrolysis before reaching the target. From the literature review, it is established that the ZBG is very crucial for chelation with Zn2+ ion in the binding pocket. So far, 28 analogs have been synthesized and more analogs synthesis are currently undergoing.

To study the effects of our analogs on cell proliferation and histone acetylation, both MTT (3-(4,5-dimethylthiazol-2-yl)-2,5-diphneyltetrazolium bromide) and immunofluorescence microscopy, respectively, are currently carrying out using various tumor cells. The effect of new synthetic compounds on the activity of recombinant purified HDACs by using a fluorogenic assay kit is also currently in process. Further assessment will include the quantification of acetylation levels by potent compounds using flow cytometry. To evaluate acute toxicity and assess potential safety, we will determine the maximum tolerated dose of the most active compound which will later subject to in vitro (Plasma stability assay & Microsomal stability Assay) and in vivo studies (Blood-brain barrier permeability & Pharmacokinetic study). The prospective compound will later be assessed for memory consolidation studies to determine its effectiveness for long-term memory formation, its mechanism of action, and the extent to which it rescues memory deficits in mouse models (both male and female) of aging and Alzheimer’s disease.