In 2018 alone, the United States had 1,708,921 new cases of cancer reported, and 599,265 people died of cancer. Of the many types of cancer, female breast and prostate cancer had the highest rates of new cases. Each of these had 126.8 and 107.5 new cases per 100,000 people respectively. Cancer is the irregular or uncontrolled growth of cells which can spread throughout the body. There are limited existing treatments options for these types of cancer such as docetaxel, ixabepilone and eribulin (Figure 1). These treatments are hard to synthesize and have severe side effects. This creates a need for a novel cancer treatment that is easily attainable and highly effective with minimal side effects. 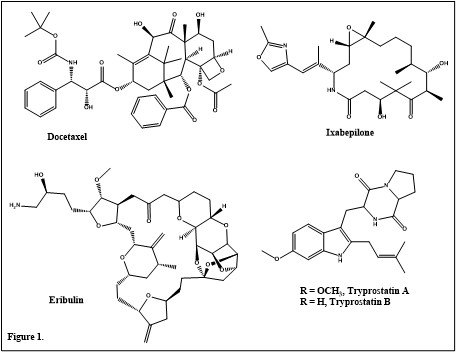 To address this need, the Hossain group is furthering work that was performed by the Cook group based on work completed by the Osada group. The Osada group discovered tryprostatin A and B (figure 1). to be cell cycle arrest agents. Tryprostatin A (TPS A) works as a microtubule inhibitor leading to cell cycle inhibition in the M phase. The Cook group synthesized and tested analogs of tryprostatin A leading to a moderate increase in potency. They tested the compounds potencies on their ability to inhibit tsFT210 cell proliferation. TPS A had an IC50 of 68 and their most potent analogue had an IC50 of 10 µM. However, this analogue did not have a specific effect on cell cycle arrest indicating that it would have severe side effects. Their best analog with an effect on cell cycle arrest had an IC50 of 19 µM. Now the Hossain group is continuing this work with the goal of discovering a compound with a sub-micromolar IC50. In order to accomplish this goal, they developed an improved synthesis of tryprostatin B involving a novel method of C-2 prenylation of gramine. They are now using this method to carry out the synthesis of tryprostatin analogs based. The planned analogs are guided by the results from the Cook group SAR and docking studies from the Bordbar group. Some of the key findings include the benefits of a hydrogen bond acceptor in the C-6 position of the indole moiety and an aliphatic amino acid in place of the proline residue. The end goal is to develop a safer, more potent microtubule inhibitor to treat cancer.