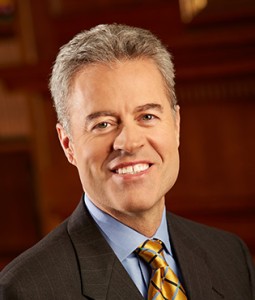 Mark A. Mone is chancellor of the University of Wisconsin-Milwaukee (UWM) – the only public research and access mission institution in Wisconsin. With an operating budget of $674 million, UWM serves 24,000 students on three campuses and has the largest population of diverse students of any four-year campus in the state. He has served as the ninth chancellor of UWM since being appointed by the UW System Board of Regents in 2014.

Dr. Mone has positioned UWM as a leader in transforming the region and state by advancing equity through education and addressing societal issues through research, strategic re-invention and partnerships.

Under his leadership, the university has been named a top-tier research institute by the Carnegie Classification of Institutions of Higher Education three times since attaining Research 1 status in 2016. UWM is one of the nation’s top universities for community engagement as classified by the Carnegie Foundation for the Advancement of Teaching.

UWM graduates more than 5,000 students annually and has over 200,000 alumni, with over 80% remaining in Wisconsin for at least the first decade beyond graduation. As a significant contributor to Wisconsin’s workforce, UWM is a leader in providing highly-skilled graduates in critical, high-demand areas.

Dr. Mone has developed path-breaking partnerships. He co-created the Higher Education Regional Alliance – a partnership with 18 colleges and universities plus 10 economic development and community partner organizations – to increase the number of college graduates to address the growing need for highly-skilled talent in the state. He has expanded UWM’s innovation through the Lubar Entrepreneurship Center and strategic partnerships with business and community leaders. Under his leadership, UW-Milwaukee launched TechEd Frontiers, the Connected Systems Institute and co-created the Northwestern Mutual Data Sciences Institute.

He co-founded and co-leads M-cubed – a critical initiative of the three major public education institutions in Milwaukee that jointly serve more than 150,000 students – to close the achievement gap. As a founding partner in the Moon Shot for Equity ‘s inaugural launch in the Milwaukee region he has been a collaborative leader to eliminate student equity gaps in education.

Chancellor Mone co-led the creation of the UW System-wide Freshwater Collaborative of Wisconsin, to solve the world’s water challenges. The collaborative, led by UWM, connects the 13 UW System institutions through shared curricula and research.

Firmly committed to national, regional and community service, Chancellor Mone serves on the boards of the Association of Public and Land Grant Universities’ Coalition of Urban Serving Universities, Horizon League Athletic Conference, The Water Council, United Way, Milwaukee Succeeds, Milwaukee Film, BizStarts Milwaukee, and Scale Up. He is an active member of the Greater Milwaukee Committee and Metropolitan Milwaukee Association of Commerce.

Dr. Mone is a frequent speaker on closing the achievement gap, partnerships, and the critical economic role of public research universities. He has been involved in vital national conversations about the value of a college degree.

Chancellor Mone is an avid cyclist, athlete and a gourmet cook. He is married to Dr. Sara Swanson and they have two adult children, both graduates of public universities.

We will be a top-tier research university that is the best place to learn and work for students, faculty and staff, and that is a leading driver for sustainable prosperity.