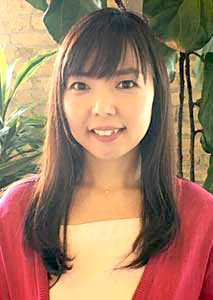 Dr. Ai Nihongi is a Research Associate of the School of Freshwater Sciences (SFS) at the University of Wisconsin-Milwaukee (UWM). Originally from Japan, Dr. Nihongi earned her bachelor's degree in Marine Biology from the Tokyo University of Fisheries, (now Tokyo University of Marine Science and Technology), during which time she was selected to study as an exchange student at the University of Victoria, BC, Canada. While in Japan, Dr. Nihongi also became certified to teach high school biology and to be a curator for natural history museums, including aquariums. After four years of study in Japan and one year in Canada, she entered the PhD program in Biological Sciences at UWM to conduct research on the behaviors of planktonic crustaceans at UWM's Great Lakes WATER Institute. After earning her PhD from UWM, she worked as a postdoctoral fellow at Skidaway Institute of Oceanography in Savannah, Georgia, and then was hired by Discovery World in Milwaukee, to work as an Associate Scientist in Aquatic Biology at the educational, environmental, and cultural museum. There, she developed interactive exhibits designed to enhance the scientific literacy and environmental stewardship of K-12 students, teachers, and visitors to the museum, and served as a liaison between Discovery World and SFS. Dr. Nihongi was active as an educator while at Discovery World, teaching Limnology and Environmental Science courses at Beloit College as a Visiting Assistant Professor. She also instructed K-12 students and teachers and developed courses and teacher training programs.

Dr. Nihongi has been working at SFS as a Research Associate since October 2010 in the laboratory of Dr. J. Rudi Strickler. She led two successful EPA Great Lakes Restoration Initiative grants to develop the optical system to quantify and observe invasive species in ballast water. She has also been working on the effect on zooplankton ecology of oil spills in the Gulf of Mexico, as a member of the Dispersion Research on Oil Physics & Plankton Studies I and II (DROPPS I and II) Consortium funded by the Gulf of Mexico Research Initiative (GoMRI). Most of her research has been conducted in collaboration with microbiologists, physicists, and mathematicians from other U.S. and international institutions.

In addition to her research, Dr. Nihongi has created educational science films on zooplankton. Her films received three Telly Awards, an award from the Ecological Society of America, and an award from the Japan Wildlife Film Festival. The films have been used at the facility and classrooms of Discovery World and by educators at K-12 schools and at colleges. One of her films was created for a special exhibit called "Plankton in Art" for a meeting of the American Society of Limnology and Oceanography, and was featured in Nature (http://www.nature.com/nature/journal/v445/n7127/full/445487a.html). Dr. Nihongi also worked as a freelance filmmaker for a BBC show called "Richard Hammonds Invisible Worlds".