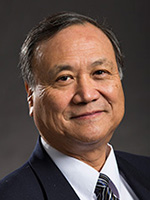 Ryo Amano is professor of Department of Mechanical Engineering. He is also Director of UWM-DOE Industrial Assessment Center (IAC) who conducts energy audit for industries and water utility facilities in Wisconsin. As of now the center has completed the energy assessment more than 100 companies.

Ryo Amano has worked on waste water aeration research, multi-phase flow, turbomachinery including water pumps/turbines, compressors, gas/steam turbines and renewable energy technologies. In aeration research, his team won a US patent for a fine bubble diffuser with which very fine gas bubbles are generated through such an invention. He is currently working on cavitation research with which formation of chaotic cavitation is controlled in most of hydro turbines, pumps, and high-speed water passage in hydro-machines. With this research severe damages and erosion on machine surfaces attributed to cavitation are eliminate to extend the life of parts and components through water passages. Moreover, his research includes phase change of water and vapor such as evaporation, condensation, fusion, sublimation, and deposition.

Dr. Amano has an international reputation in renewable energy systems, turbulence and turbomachinery research. He is an American Society of Mechanical Engineers (ASME) Fellow, International Society of Energy Efficient and Sustainability (ISEES) Fellow, American Institute of Aeronautics and Astronautics (AIAA) Associate Fellow. His quality of research was recognized as a recipient of ASME George Westinghouse Gold Medal (2014), AIAA Energy Systems Award (2013), and AIAA Sustained Service Award (2007). At the institution, he is a recipient of Excellence in Research Award by UWM Graduate School/UWM Foundation (2001) and Senior Research Award by UWM Graduate School/UWM Foundation (2014). He is a recipient of three best paper awards from ASME.

He is an editor of ASME Journal of Energy Resources Technology, Int. J. Rotating Machinery, and many other journals.