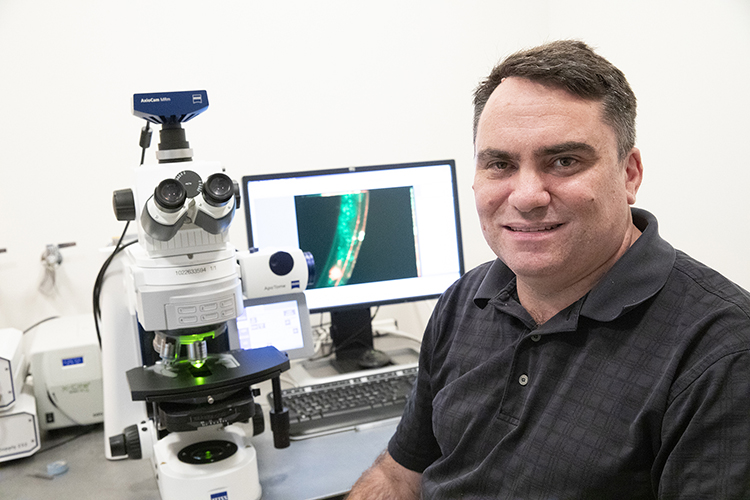 Biologist Christopher Quinn is studying how autism begins and unfolds using the brain cells of a tiny worm as a model. (UWM Photo/Troye Fox)

Genes play a major role in how autism begins and unfolds. But exactly what is going on inside the brain cells, or neurons, is still unknown.

A biologist at the University of Wisconsin-Milwaukee is investigating the exact genetic characteristics underlying autism using a powerful new model: A certain gene mutation that affects the hearts and brains of children, causing a lethal disease called Timothy syndrome. Christopher Quinn, a UWM associate professor, is interested in this particular gene mutation because one of the symptoms of Timothy syndrome is autism.

“Because we believe that most causes of autism involve complicated interactions between many genes, the Timothy syndrome gene mutation offers us a simplified model to begin the research because, in this case, a single gene mutation results in autism,” Quinn said. The work is supported by a $1.7 million grant from the National Institutes of Mental Health.

Quinn’s lab uses a microscopic worm as a model to understand how gene mutations affect brain circuitry. This worm has only 302 neurons, compared to more than 100 billion neurons that are found in the human brain. Despite the simplicity of this animal, it has many similarities to humans when it comes to genes and cellular functions.

When the gene being studied, the CACNA1C gene, functions normally, one of its jobs is to facilitate communication. Already Quinn’s lab has found that, in the worm, the mutated gene disrupts communication by changing the circuitry of the electrical signals that neurons use to talk to each other.

“Neurons do eventually connect with other neurons, but not in the right place,” he said. “There’s lots of evidence that these electrical signals are mistargeted. We just don’t know why.”

As part of the study, Quinn also will investigate whether the gene mutation alters how the neuron rids itself of unnecessary or dysfunctional components – in other words, how it takes out the trash.

In a normal cell, genes give instructions for waste disposal to specific parts of the cell. Quinn wants to know which part is potentially disabled by the mutation – and whether that also affects neuron communication.

Lastly, he will identify interactions between the CACNA1C gene mutation and other autism-linked genes that could potentially be used to predict and diagnose autism. Scientists have identified at least 100 genes that are strongly linked to the condition.

This deep cellular dive into the influence of the mutated gene is important not only to understand autism, Quinn said. What he finds may be applicable to other neuropsychiatric disorders because variants of the CACNA1C mutation have been associated with schizophrenia, bipolar disorder, major depression and attention deficit-hyperactivity disorder.