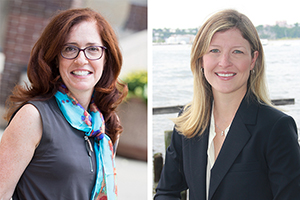 FedEx, a major sponsor of the Washington Football Team, pressured the NFL team to change its name from the Washington Redskins. Nike launched a high-profile campaign to support the Black Lives Matter movement. Starbucks has come out for transgender equity and LGBTQ inclusion.

Consumer psychologists know that people affiliate with brands the same way they affiliate with people to form communities. And more and more, consumers are expecting brands and companies to take a stand on social issues.

Consumer psychology has long acknowledged the influential power of social norms. Now it can help us understand how social movements change those norms and how people turn beliefs into action, according to new work by a team of researchers that includes two from the Lubar School of Business at UWM.

“Consumers can become the community that the framework for social change describes,” said Tracy Rank-Christman, an assistant professor of marketing. She and Laura Peracchio, professor of marketing, contributed to research that details the architecture of the rise of the Black Lives Matter movement and illustrates how consumer behavior mirrors the process.

Their paper was recently published in the Journal of Consumer Psychology.

For consumers, consumption presents an opportunity to say something about themselves – including their social justice beliefs – and for others to know about it, Rank-Christman said.

The avenue for self-expression can set the stage for advocacy through purchasing, she said, when “bystanders” transform into “upstanders,” those who move from inaction to action.

A growing community of “upstanders” are needed to form a collective identity, a common stage in the development of social movements that Rank-Christman said can affect the members’ behaviors and motivations. As an example, she points to LBGTQ+ communities in various cities marching with the Black Lives Matter movement to help achieve a collective identity.

Time to grow and change

It may take years before that stage is reached, said Peracchio, because upstanders need to construct a diverse and networked coalition of allied organizations. The same is true in the consumer-activist world.

“In reality, there are numerous aspects at work in moving new norms forward – our own values, the influence of our friends, connecting to media channels – all interacting in concert,” Peracchio said. “Lots of things happen simultaneously that lead to incremental changes, and that builds into a crescendo of influences on social norms.”

As a movement’s network grows, trust and diversity among the intertwined communities is the key to a free flow of information, which is essential for movement expansion. This is important part of evolution, said Rank-Christman, because marginalized groups may feel solidarity with one another, which in turn can help create a larger network. “While people may vary in characteristics such as age, race and socioeconomic backgrounds, they may have similar values, goals or stands on social issues,” she said.

Other co-authors on the paper include Gia Nardini of the University of Denver, Samantha Cross of Iowa State University and Melissa Bublitz, associate professor of marketing at UW-Oshkosh, who earned her doctorate from the Lubar School in 2011.