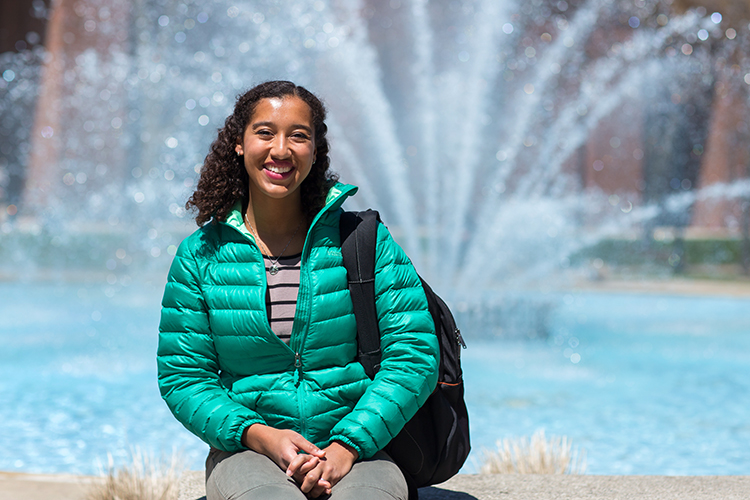 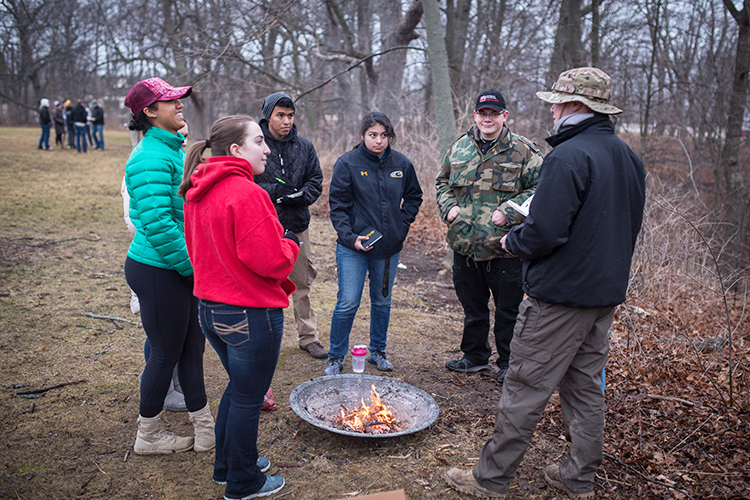 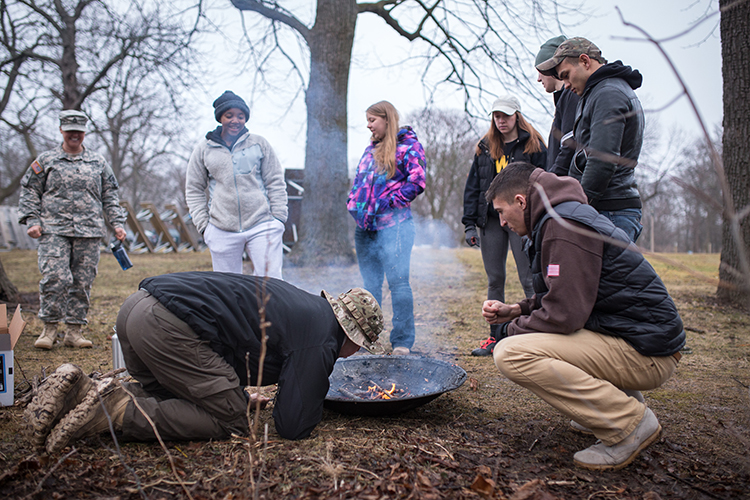 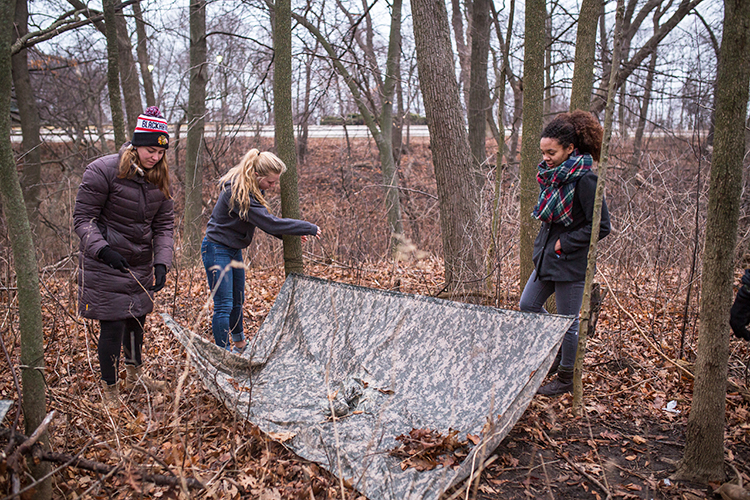 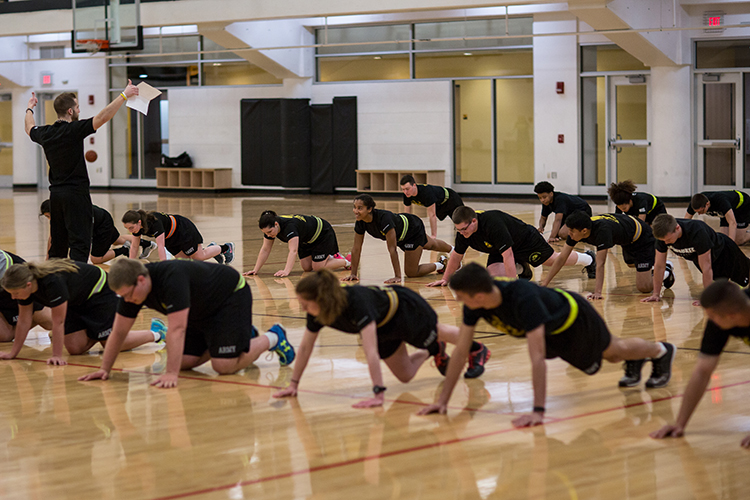 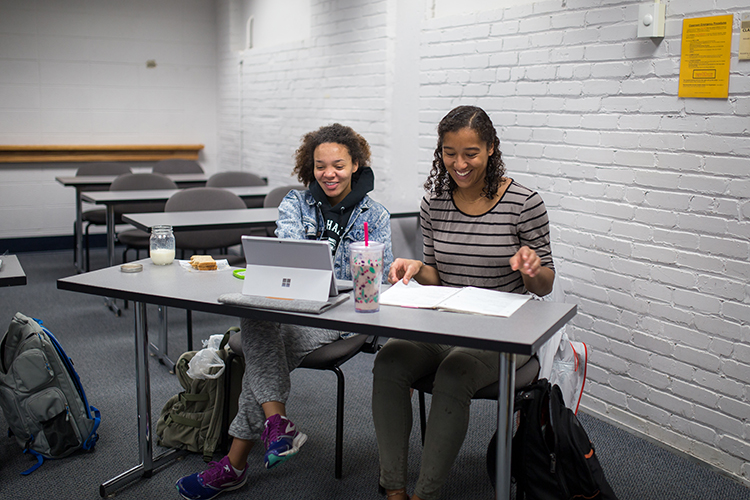 The early-spring sun has yet to rise over Lake Park on Milwaukee’s east side, where a group of University of Wisconsin-Milwaukee students stands at attention.

The dim, gray light reveals plumes of breath hanging in front of their faces before drifting into the surrounding fog. Caitlin Fielding’s puffs mingle with those of her fellow ROTC cadets, who are here for Friday-morning military science labs. Before they leave, they’ll learn a slew of outdoor-related skills, including the prevention of hypothermia.

This was the college experience Fielding had envisioned since she was a freshman at Spooner High School in northwestern Wisconsin, where she played basketball and ran cross country. And though her father served in the U.S. Army, her mother was the one who put the ROTC idea in her head.

“I mean, I love to exercise, so that kind of sold me already,” says Fielding.

And it’s worked out well. As a sophomore during the spring 2016 semester, Fielding earned an award for most outstanding cadet in her class.

But ROTC involves much more than beating the sun out of bed to exercise. Capt. Michael Imdieke, an adviser to the cadets, refers to the program as a “leadership internship.” The UWM program, a satellite of Marquette’s Golden Eagle Battalion, prepares students to become military officers.

Cadets are involved in many aspects of UWM student life, with the program boasting student athletes and student association representatives among its members. An ROTC program is sending sophomore Wynter Novak to Kyrgyzstan and Poland in the summer. And in summer 2015, junior Vincent Paikowski completed the highly competitive Special Forces precombat diver qualification course.

After a typical morning workout with her fellow cadets, Fielding walks through campus alert and invigorated, while other students trudge past her with cups of coffee and groggy eyes. In her military science class, she and other students, still sweaty from the morning’s exercises, consider the ethical implications of a captured enemy.

An officer may have to deal with troops who want to harm the prisoner – especially if he’d just attacked their compatriots – and could lose their support by standing firmly against it. The students weigh the various consequences, while Imdieke guides them through other facets they may not have considered.

“You have to sit back and think about it,” Fielding says. “Basically what we’re learning is critical thinking.”

And they’re learning practical skills, too. At that foggy Friday-morning drill in the park, Fielding and other cadets huddled around a pile of twigs and brush. One cadet led a training exercise for building a “Lincoln Log” fire, made by stacking twigs as if building a house with the old-school child’s toy. This helps the fire oxygenate faster, and another cadet noted that the fire was redoxing, “undergoing electron transfer.”

Whether building Lincoln Log fires or extinguishing ethical ones, it’s the diversity of experiences that Fielding relishes. She plays on the ROTC women’s basketball team, has run in the Army Ten Miler in Washington, D.C., and has taken part in Leadership Development Exercises at Fort McCoy in Wisconsin.

Her travels continue this summer, taking her all the way to Madagascar. The trip is part of ROTC’s Cultural Understanding and Language Proficiency Program, and she’ll work with Madagascar’s military on humanitarian efforts.

It’s yet another proving ground for the skills she’s spent so much time honing here, as she did at Lake Park. The sun finally came up and strained through the fog, shedding more light on Fielding and her fellow cadets, all huddled in a circle, working to build a fire with damp twigs and a magnesium strip.