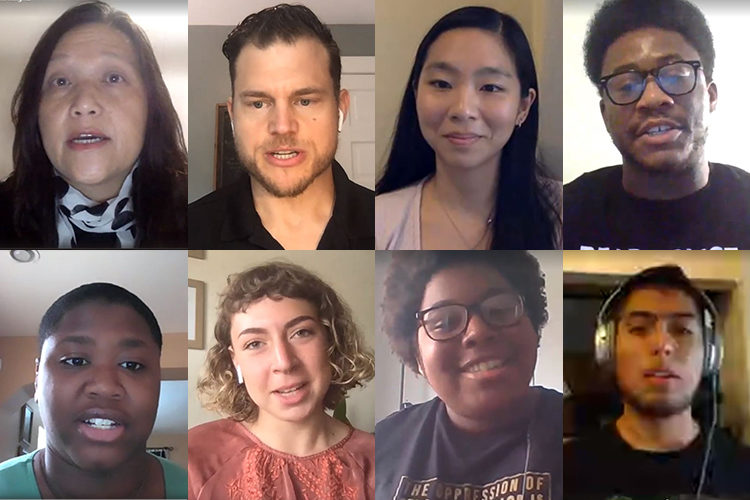 Frustration, anger, sadness and fatigue were among the descriptions a group of UWM students used for how they were feeling about the recent unrest around racial and social justice happening in Milwaukee and across the nation.

The panel of six students, both graduate and undergraduate, shared their opinions about past and current racial inequities and didn’t hold back on their views of what the university needs to change as it seeks to improve the racial climate for Black students and others of color.

The event, held virtually June 26, was the second in a series of events called UWM’s Campus Dialogue on Racial Justice. The first event, on June 12, featured six UWM faculty members. Staff members will participate in the next event on July 10.

“I’m just trying to take it a day at a time and trying to keep myself grounded,” said Mia Heredia, who is beginning her master’s degree in criminal justice. “It’s really hard to do when you’re looking at such large, spread out institutions –like education, like health care, like the policing system – and trying to grapple with all that as an individual person.”

Panelists said the amount of work necessary to explain their grievances to white people was draining and exhausting. White students, all panel members said, had the responsibility of educating themselves about oppression of people of color in the U.S., and explaining it to their families and friends.

There also was no shortage of ideas on the solutions the members of the group hope to see, but all said the protests were necessary and should be only a first step.

“Don’t just listen and say, ‘Oh, I’ve done my part. Use your power and use your privilege to do something about it,” said Paulina Lim, a graduate student in clinical psychology.

Some felt that the only way to effect lasting change was to completely rebuild institutions, but with the inclusion of the voices of people of color.

Legislative reforms will not be enough and are just an attempt to appease people of color, said Chris Chavez, a junior in comparative ethnic studies and Latin American, Caribbean, and U.S. Latinx studies.

“My community has been affected by police violence since the beginning of the existence of this country,” Chavez said. “It has reminded me of how important it is that we stop fighting for useless liberal reforms that have been happening for 200 years. There has to be a total structural change.”

Destiny Brady, a senior in architecture, expressed concern about the “school-to-prison pipeline” that begins with students who are policed in K-12 schools. She also worries whether her sister, who is expecting a baby, will get adequate health care because Black women die in childbirth at disproportionate rates to white women.

Heredia also felt that institutional systems should be abolished and rebuilt from scratch, allowing people of color much more say in how the institutions are run. “Burn it down and rebuild it,” Heredia said, “and when we do, I don’t want to see anyone in the room (representing Black people) who isn’t Black.”

It’s time to stop making excuses for so little diversity in the teaching staff and for advertising the university’s student diversity without cultivating it, the students said.

If diversity and inclusion were as important at UWM says, then Brady wonders why she hasn’t had a Black instructor in three years. “Tokenism is alive and very well in every single UWM ad.”

“Anti-blackness permeates every system in this country. UWM is a part of systematic racism,” said Kentrell Washington, a graduate student in social welfare. “It has to do better.”

Exposing all UWM students regardless of color to a more diverse variety of achievement is part of the solution, Heredia said.

“I don’t like that our curriculum supports the erasure of ethnography as much as it does,” she said. “It’s doing us all a disservice (because) then we go into our fields and we uphold these superficial ideals and it doesn’t help anybody.”

Three students on the panel advocated the abolition of the campus police department, including Student Association president Emma Mae Weber, a senior in women’s and gender studies, who acknowledged that she is having to reflect on what safety means if Black students don’t feel safe with a police presence and many white students do.

A bigger problem, she said, is that students don’t feel heard. Weber pointed to the absence of Chancellor Mark Mone from the panel discussion. “You need to be here with your students,” she said, “and you need to be listening to them in the moment.”

Mone gave the opening remarks, but then had to leave to for a meeting with the UW System leadership on the university’s fall reopening during the pandemic.

“Listening is very important to me, and I look forward to hearing how this conversation goes,” said Mone, who promised to go back and listen to the recording of the event later. “This will be foundational as we take actions and implement suggestions from these dialogues both on campus and greater community.”