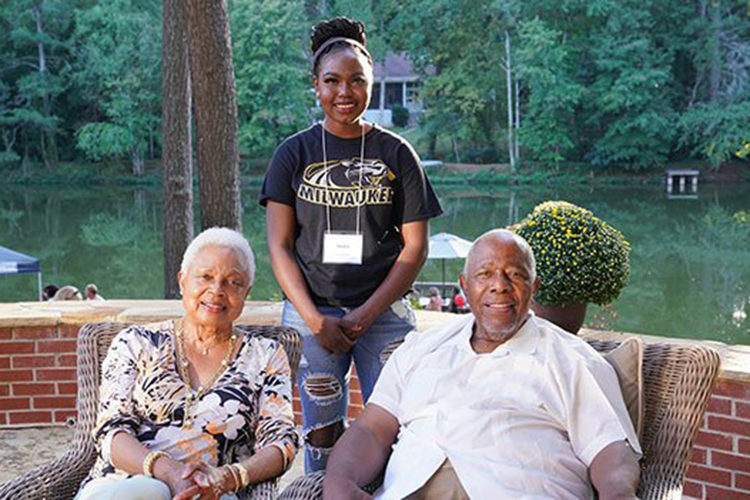 UWM student Hawa Brema got to meet Hank Aaron and his wife, Billye, in 2019, when the Aarons paid for all their foundation’s scholars from across the U.S. to come to their home in Atlanta for a barbecue and an Atlanta Braves game. (Photo courtesy of Hawa Brema)

Hank Aaron left an incredible legacy on and off the baseball field.

One of his many off-the-field contributions is benefiting a UWM senior, Hawa Brema. For the past four years, Brema’s academic studies at UWM have been funded through gifts to an endowment created by Aaron’s Chasing the Dream Foundation 4 for 4 Scholarship. The scholarship at UWM is in memory of Aaron’s longtime friend and UWM alumnus, the late Joseph Kennedy.

Even a few weeks after Aaron’s death Jan. 22, Brema wipes away tears as she talks about him and what the scholarship has meant to her.

“He changed my life. He literally changed a lot of people’s lives,” said Brema, who is a senior in human resources management. She is also earning certificates in real estate and cultures and communities, and plans to graduate in May.

In September 2019, she had the opportunity to meet Aaron and his wife, Billye, in person when he invited all his foundation’s scholars from across the U.S. to his home in Atlanta for a barbecue and an Atlanta Braves game. The Aarons paid for the students’ expenses.

“They were so nice, just really genuine people,” Brema recalled.

Brema was born in Sudan and spent 12 years in Kenya before her family emigrated to the United States.

“My dad’s big on education. He wanted us to come here for a better education,” she said. A graduate of Bradley Tech High School, Brema has five siblings, so college tuition was a challenge for her family.

She connected with the scholarship through a program she was involved with through the Boys & Girls Clubs of Greater Milwaukee. She has been a Hank Aaron scholar for all four years at UWM.

In high school, she played softball, so had some familiarity with the game and learned more about Aaron’s baseball career when she applied for the scholarship.

Aaron, a Hall of Fame player who began and ended his legendary baseball career in Milwaukee, had numerous ties to the city and to Wisconsin. He started his minor league career in Eau Claire, and went on to play for the Milwaukee/Atlanta Braves for 21 years, including for the 1957 Milwaukee Braves world championship team. (The franchise moved to Atlanta in 1966.) He returned from Atlanta to play for the Milwaukee Brewers for two years to wind up his career.

Brema is the second student at UWM to receive the four-year renewable scholarship.

‘Great and wonderful human being’

At his funeral in January, Aaron was honored for his contributions on and off the baseball diamond.

“In my humble opinion, he was no doubt the greatest player of our generation, but, more important, he was a great and wonderful human being,” Bud Selig, former baseball commissioner and owner of the Brewers and a longtime friend of Aaron’s, said at a memorial service. “Neither fame nor fortune changed his extraordinary kindness and empathy, which led to his greatness off the field. His impact not only in baseball but all of America will never be forgotten.”

The scholarships, which have supported more than 100 students across the country since 2010, will continue.

“I’m glad I had the chance to meet him in person,” Brema said. “I don’t have any debt because of him and the scholarship. He was just a blessing. That’s all I can say.”

UWM also played a role in honoring Aaron in 2007 when the Brewers decided to commemorate the 755th and final home run of his career at County Stadium. Since Aaron hit the home run in 1976 and County Stadium was torn down in 2001, the team faced the challenge of finding out exactly where that ball had landed.

Professor Alan J. Horowitz, then chair of the civil engineering and mechanics department at UWM, teamed up with students from UWM’s Chapter of the American Society of Civil Engineers on the project. They studied GPS measurements, reviewed surveys of County Stadium, studied aerial photos of Miller Park and County Stadium and closely examined the home run video to determine the exact location where the ball landed.

After all their work was completed, Horowitz and his team determined that the ball traveled 363 feet and landed in what became the parking lot of Miller Park (recently renamed American Family Field). A plaque marks the spot.