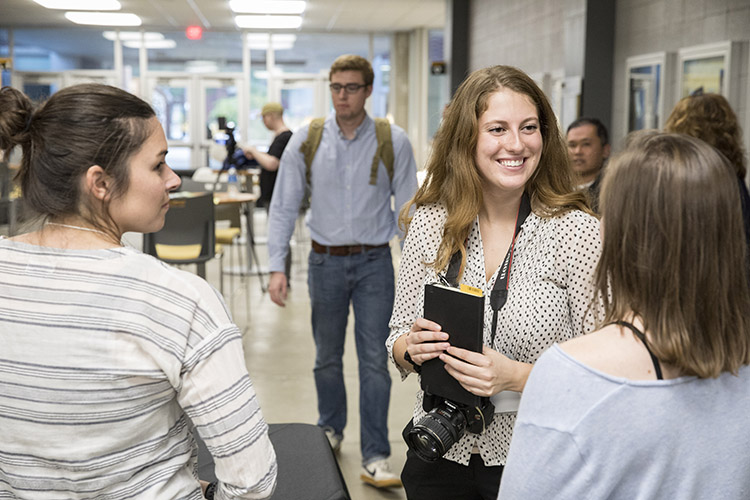 For some UWM students, the U.S. Senate debate held on campus Oct. 8 was a golden opportunity. It was a chance for journalism students to cover a nationally significant event without leaving campus.

“I’m proud that our students could do this,” McBride said. “These students are passionate about their craft.”

The debate was one that saw both candidates clash on numerous topics, including immigration, tariffs, health care, gender pay, abortion rights and the confirmation of Brett Kavanaugh as Supreme Court justice.

The debate became heated several times, with both candidates’ supporters becoming very vocal in the crowd.

“It was a lot more rowdy than I expected,” student journalist Michelle Harkey said.

McBride spent a week preparing the students for the debate and their articles that they would write. Many of the students were nervous for the event but eager to see how other local media covered the debate.

“I hope to learn some tricks of the trade,” Royce Podeszwa said. “I want to see how the professionals tackle debates like this and soak it all in like a sponge. I’d like to see their strategies in recording and note-taking.”

Student Zoe Munson noted the importance of the event, beyond just an academic exercise.

“I’m excited to be a part of something (that) not only I but many people see as substantial,” she said.

Gathered around in the spin room after the debate, the team of student journalists discussed what had stood out to them and gave advice to each other as they began their articles.

“It was exciting to be in the room to see the candidates,” said Sierra Trojan, a student journalist. “I’m excited to represent them with their quotes and remain impartial as I construct a story for those at home.”

Students will get another opportunity in less than three weeks when the Wisconsin gubernatorial candidates square off. Republican Gov. Scott Walker will debate Democrat challenger and state Superintendent of Public Instruction Tony Evers Oct. 26 at the Helen Bader Concert Hall in the Helene Zelazo Center for the Performing Arts. The election is Nov. 6.