James “Groovy” Cocroft, an employee of the Military and Veterans Resource Center at UWM, recently reminded Katie Mosack that there are still good people in this world.

While riding her bike on Kenwood Avenue in late September, Mosack was struck by a vehicle near the parking garage of the UWM Student Union.

“I was just shocked,” said Mosack. “I think they were passing the parking structure and decided at the last minute to turn into it. They hit the front of my bike and I hit the ground.”

After witnessing the accident from his own vehicle, Cocroft quickly joined other Samaritans to assist Mosack.

“You know, I just wanted to make sure she was all right,” said Cocroft.

With several people helping her, Mosack began to realize the severity of what had just happened.

“I was a little rattled,” said Mosack. “I had a few bumps and bruises, but it felt really good to know that somebody wanted to help me after I was hit.”

“It meant a lot to me that rather than stand by and watch what happened, they jumped into action to help a complete stranger.”

Mosack has mostly recovered from her injuries and has started to ride her bike around the area again. 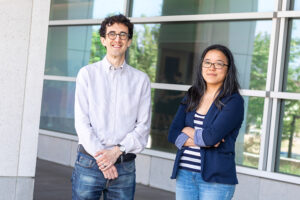