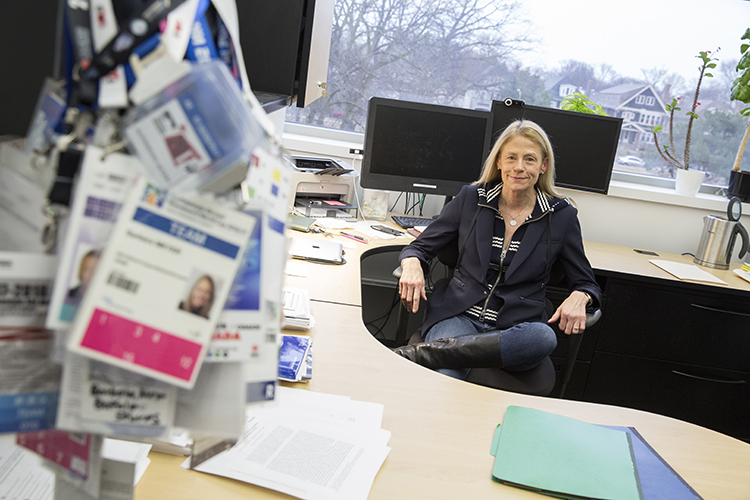 Credentials from Olympics, World Cups and other events decorate the office of Barbara Meyer, health sciences professor and director of Laboratory for Sport Psychology & Performance Excellence at UWM. "It was a humbling, honoring, cool moment when I got home the other day and saw my (2018 Winter Olympics) accreditation in the mail," Meyer said. (UWM Photo/Troye Fox)

From Salt Lake City to South Korea, UWM Professor Barbara Meyer has had a chance to bring her passion for performance psychology to athletes competing at the highest level – the Winter Olympics.

Roughly 20 years ago, Meyer began working with injured freestyle skiers, helping the athletes rehab and return to their sport. Through that work, she became involved at the Olympic level and worked her first Winter Games for an Australian athlete at the 2002 Olympic Winter Games in Salt Lake City, Utah.

Her client at those games, Alisa Camplin, won a gold medal with Australia’s women’s aerial ski team, calling Meyer her “secret weapon.” After Camplin ruptured her ACL in 2004 and 2005, Meyer worked her through her rehab and was there when she won bronze at the 2006 Winter Olympics in Turin, Italy.

Since the Salt Lake City Games, Meyer has worked every Winter Olympics – Turin, Vancouver, Sochi – and will return for the games in Pyeongchang, South Korea, Feb. 9-25.

“It was a humbling, honoring, cool moment when I got home the other day and saw my (2018 Winter Olympics) accreditation in the mail,” said Meyer.

Over the years, she has worked with Olympic athletes in several winter sports, including ice hockey and speedskating. She continues to work in several sports, consulting with numerous athletes from multiple countries, but the Australian aerial ski team has been her primary focus since 2002. In 2014, she worked with slopestyle skiers; it was the first Winter Games to include the event.

“(Sochi) had arguably the largest slopestyle ski course ever built, so it was interesting and challenging to work with the athletes and coaches,” Meyer said.

‘Best job in the world’

Lockett gave credit to Meyer after medaling in the 2017 Short Track World Cup in Budapest, Hungary.  It was the first time she reached the podium at a World Cup.

“We predicted what would happen in my race. I spent 24 hours thinking ‘patience’ and ‘calm’ with Barbara, and it all paid off,” Lockett said then.

“When it gets cold on the ski hill after eight hours, when you’re managing a relationship between an athlete and a coach for the umpteenth time,” Meyer said, “I really do go back to ‘I have the best job in the world.’”

The weather conditions in Pyeongchang present an added test for Meyer and the aerial skiers. “It’s cold, it’s damp and it’s windy. And the wind can change directions completely in the few seconds from when they start to when they’re in the air.”

Amid the political climate of North Korea, another challenge for Meyer has been managing concerns over safety at the Winter Games. During one of her visits last year to prepare, North Korea launched a missile test, resulting in news alerts to her and her group.

“All of us visitors to the region got nervous, but all of the South Korean hosts said it was fine, that it happens regularly,” she said. “We experienced similar concerns about safety in Sochi, but it’s nothing to worry about.”

Meyer, an athlete in her own right, competed in swimming and tennis – eventually playing tennis collegiately at UW-Eau Claire. Meyer’s experience competing at a high level has helped guide her professional journey. She has worked with athletes aiming for the top in multiple sports, including hockey and football.

“I get energy from working with people who are trying to achieve a goal,” said Meyer. “That someone trusts me enough to include me in their journey is incredibly humbling. It really is one of those pinch-able moments every time I walk into an arena or a stadium.”

Meyer’s work with Olympic athletes is also one of her favorite things about being a professor at UWM. As one of the country’s top research universities, UWM encourages the creation of knowledge, cutting edge applications and applied research. For Meyer, that institutional commitment allows her to use her Olympic experiences as research-generating opportunities and allows students to learn through those experiences, too.

“In Vancouver, I was teaching an undergraduate class in the spring semester, did a live lecture capture and taught from Vancouver,” Meyer said. “It was a fun experience for the students.”

Meyer also takes other experiences from the field – not just the Olympics – and turns them into real-world applications that students can use as case studies in their learning experiences. Years ago, she was able to study two ice hockey players, brothers, who competed against one another. With no existing research on the topic to guide her consultative practice, she worked with graduate students in the lab to conduct research on siblings as competitors. That initial research question has since turned into publications and international presentations.

“It’s a symbiotic relationship that we have between the lab, the classroom and community engagement,” Meyer said. “We can create research in the lab that automatically helps the work we do with sport organizations, coaches and teams.”