The top of her game: UWM sport psychologist advises Olympians 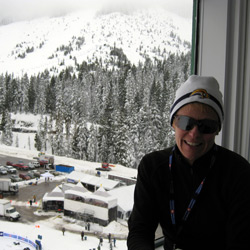 The Vancouver 2010 Olympic Winter Games marks the third such event that UWM Professor Barbara Meyer will experience as an Olympian’s sport psychology consultant, but this time is very different for her.

Australian aerial skier Alisa Camplin described Meyer as her “secret weapon” when she captured the gold medal at the 2002 Salt Lake City Olympic Winter Games. At Turin in 2006, Meyer was there to see Camplin come back from a second devastating ACL injury to capture the bronze medal. She then retired from competition, opening the door to a new challenge for Meyer.

For the past four years, Meyer has been working with the entire Australian aerial ski team. “Alisa and I agreed that when she retired, I could explore opportunities with other women in the sport,” says Meyer. Meyer, a professor of human movement sciences in UWM’s College of Health Sciences, also works with a member of the Canadian men’s aerial ski team, plus a member of the U.S. men’s ice hockey team.

Working with the women who were “the competition” when she trained Camplin has been an “interesting transition” for Meyer. “Since aerial skiing is an individual sport, the only thing team members may share is the same uniform,” says Meyer. She points out that the Australian women compete against each other for spots on the Olympic team at qualifying events, then vie against one another for medals at the Olympics.

“The idea of working with the whole team was not one that I entered into lightly. I didn’t know if these athletes would accept me, because I had previously worked with one of their big rivals.

“They grilled me in interviews, and rightfully so. Several of the aerial skiers were very concerned about my motivations for working with them.”

In the end, though, their “due diligence” convinced the athletes how valuable working with Meyer could be. “My approach uses very little group work anyway, so even if we were talking about a football team, I would have very few team meetings. I focus on what every individual needs, which isn’t necessarily what the rest of the team needs.”

Meyer works with each athlete to formulate an individual mental game plan. This is made even more challenging by the fact that several of the skiers have different coaches. It is not uncommon for her to discover that “Athlete A and Coach B need this, while Athlete D and Coach E need that.”

One foundation of Meyer’s work is building routines and processes for every type of performance-related situation that she and the athlete can imagine. Using real simulations and mental imagery, they work together to prepare for any eventuality.

“Research tells us that one major difference between elite athletes and the rest is mental preparation,” Meyer points out. “A key is to reflect on your best and worst performances. ‘What was I thinking, feeling, doing?’ Maybe you felt well-rested or maybe you were doing a lot of yoga at the time. Those are controllable things that you can try to replicate. Sometimes an athlete will say, ‘Well, the weather was such and such.’ That’s interesting, but not something you can control.”

Particularly in a high-risk sport such as aerial skiing, eliminating extraneous variables is all-important. “It becomes essential to be calm, balanced and focused,” says Meyer.

The world is watching

She describes how elite competition, and especially the Olympics, presents unique challenges. While the club tennis player may play for the league championship and that is intense for that person, they can win, lose or draw more privately. “Once those interlocking rings go up – all of a sudden, the whole world is paying attention.”

Part of her work for the last four years has been to help athletes and coaches balance the “wow factor” of the Olympics with the fact that their jobs stay the same. “We’ve figured out what works for them to perform the best, so they try to do that every time they snap on the skis.”

This is Meyer’s mantra: This works for you, so do it every single time. She says the lessons are the same for the CEO in the boardroom, the professor giving a lecture or the amateur athlete. “Public speaking is public speaking, golf is golf, whether it’s your first shot or (in my case) the 112th – you need to approach it the same way.”

The reasoning is that by approaching every competition the same way, athletes maximize their chances of success every time they are (for example) on skis. Of course, Meyer admits, “That sounds great on paper, but you really have to work to convince yourself.”

In addition to coaches, Meyer pulls family and friends into the plan. “Would they normally come to a competition? If they wouldn’t, then we have to have some practices with the family there. I’ve also had athletes ‘disinvite’ family members.”

She also prepares athletes for handling those folks who come up to them on the street, or the reporters who ask the same questions over and over. “You can’t control those people, but you can control your reaction to them.”

The dominance of social media added another dimension to preparing for the 2010 Olympic Games.

Meyer discussed with her athletes: “At what point do you shut down the Facebook page, when do you stop using e-mail, how do you manage your phone calls and on what date do you begin ignoring text messages?”

While Meyer isn’t allowed to blog from Vancouver, she will be linking discussion-board questions from the Olympics to her undergraduate class, HMS 350: Psychological Aspects of Sport and Exercise. Students will cover topics such as motivation and confidence, based on what’s being covered in class and what’s going on at the Olympic Winter Games.

Meyer’s work also has given her students experience interacting with, and conducting research on, elite-level athletes.

“Because I work with these athletes over a period of years, they [the athletes] want to know what I’m doing as well,” says Meyer. She might ask an athlete: “We’re doing a class on injury today and you’ve been injured a lot. What sort of advice would you give people?” or “What do you think people should know about motivation?” The response from an athlete might include, “Would you like me to Skype in during class?”

Meyer also describes the numerous thesis topics that have sprung from this work, such as athletes who have siblings in the same professional sport or the effect on an athlete who comes from a “sports dynasty” family. The sport psychology consultant work that Meyer does gives UWM students a pool of prospective research participants. “These athletes are generous with their time and very open to participating in surveys and other types of research.”

Back to the main news listing