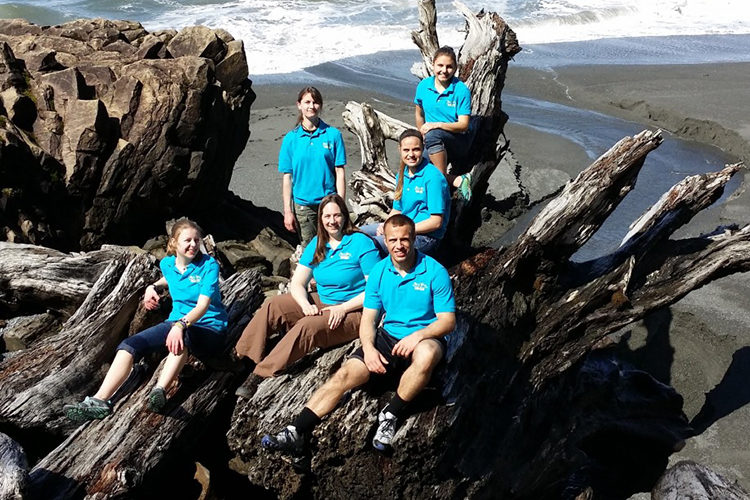 Winners of the 2014 Lake Sturgeon Bowl, the Spring Valley High School team from Wisconsin sits on a huge piece of driftwood at Rialto Beach on the Pacific Ocean in Washington before competing in the National Ocean Sciences Bowl in Seattle. (Submitted photo)

Wisconsin is 700 miles from an ocean coastline, but the state is home to numerous high school students with award-winning knowledge of oceanography.

That’s in part due to the efforts of the Lake Sturgeon Bowl, an academic quiz competition that will be hosted by the UWM School of Freshwater Sciences March 6 and 7.

In 2001, the Great Lakes WATER Institute, the predecessor to UWM’s School of Freshwater Sciences, was approached to establish a regional competition for the National Ocean Sciences Bowl in Milwaukee. At the time, there was only one regional bowl — Michigan’s Great Lakes Bowl — that was not in an oceanic coastal state.

The WATER Institute recognized there was a need to raise awareness and cultivate interest in the aquatic sciences, specifically the study of the Great Lakes, among young students.

“It was important to offer more students in the heartland of the country the opportunity to easily compete in an academic competition that focused on limnology and oceanography,” said Jim Lubner, a founding member of the Lake Sturgeon Bowl and current adjunct professor at UWM’s School of Freshwater Sciences.

This will be the 20th year for the annual Lake Sturgeon Bowl, a quiz competition for high school students that focuses on oceanography and its related sciences. UWM’s School of Freshwater Sciences partners with the National Ocean Sciences Bowl, a program funded by the Consortium for Ocean Leadership, to host the regional offshoot.

High school students travel to UWM to compete and explore the research opportunities offered by the university. “We incorporate a career aspect to the competition focusing on bringing in guest speakers and volunteers from a variety of backgrounds to help students explore water science related careers,” said Liz Sutton, the Lake Sturgeon Bowl regional coordinator.

Winners of the Lake Sturgeon Bowl advance to the National Ocean Science Bowl finals. Students come from all parts of the country to test their knowledge on the subjects such biology, chemistry, technology and physics.

Over the 20-year history of the Lake Sturgeon Bowl, the winning teams have placed in the top three at the National Ocean Sciences Bowl 10 times and won first place five times, including the 2020 competition. Nearly 2,000 students representing over 300 schools compete in regional competitions each year striving to be make it to the national finals, where the top 125 students from 25 teams compete.

Ashley Ehman participated in the Lake Sturgeon Bowl her junior and senior years (2012-2013) at Spring Valley High School, which is midway between Eau Claire and Minneapolis. In 2013, her team won and went on to compete in the National Ocean Science Bowl finals.

Her favorite memory was going on a research trip to the Apostle Islands, a prize for winning the Lake Sturgeon Bowl.

“We spent two days sailing around the Apostle Islands and getting off on various islands, hiking and doing research activities on the sailboat itself,” Ehman said. “I had never slept on a sailboat before, so that was pretty cool being able to sleep below deck.”

Established in 2002 with the goal to engage students in the world of ocean sciences, the Lake Sturgeon Bowl draws teams from all over the Midwest and some as far away as St. Louis, Missouri, Sutton said.

Teams of five students, guided by a coach, compete by answering multiple choice, short answer and team challenge (essay style) questions. In previous years, the teams would race each other, buzzing in as fast as possible, to answer the questions. This year, because of the pandemic, the competition is going virtual with teams responding to questions over Zoom.

The pandemic disrupted more than the competition this year. The added burdens on teachers hindered their participation in extracurriculars like the Lake Sturgeon Bowl. Ten teams, totaling 50 students, across the region are participating this year. Past competitions saw larger student involvement with an average 75 students, or 15 teams, playing each year.

The Lake Sturgeon Bowl is run by Sutton but made possible by volunteers, a collection of UWM faculty, graduate students and former competitors. Some of the volunteers have been involved with the program for 10 years or more, according to Sutton.

“We also have a really large group of volunteers who competed when they were in high school, some even from bowls in other parts of the country,” Sutton said. “They share their experiences with the students who are currently participating and help continue to give back to the competition.”

Ehman and some of her former opponents are among the previous competitors who help keep the bowl running. She acts as a judge and, for the 20th anniversary, she drew upon her graphic design background to create a new logo for the bowl.

“It’s a good program for young adults to be involved in because any number of volunteers that you run into are all there with the intent to make sure that everyone is having a good time,” Ehman said. “And then the people that are behind it like Liz Sutton and Jim Lubner are obviously very passionate about the cause.”