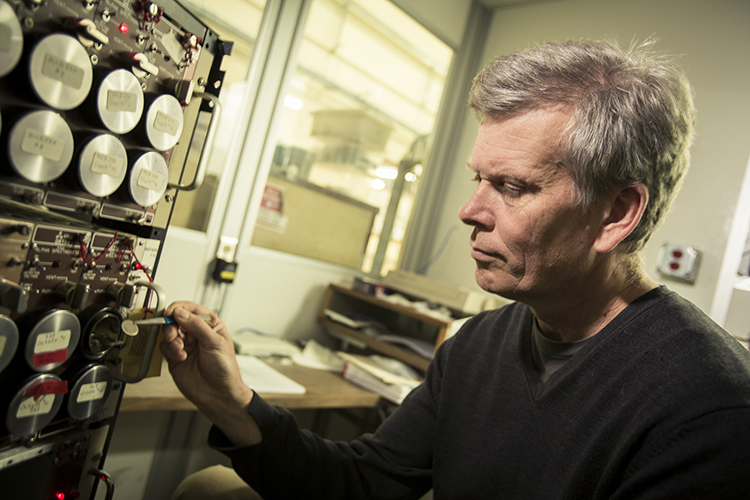 It can take days for water to travel from a filtration plant to your tap and the length of time the journey takes could affect water quality.

Disinfectants from water treatment, like chlorine, prevent the growth of harmful microbes, but they can break down over time, creating toxic byproducts in the process. Minimizing the water’s travel time in pipes reduces both processes, but measuring that time is difficult.

UWM scientist Jim Waples and an interdisciplinary research team have found a new method of finding the age of water at any point in a distribution system using something that’s already naturally in water: residual radioactive atoms from nuclear fallout of the 1950s and early ’60s.

The researchers hope their dating method will lead to new insight into the factors that affect drinking water quality in the nearly 2,000 miles of water mains in Milwaukee and other distribution networks around the world.

“Here, we are using the remnants of atom bombs detonated decades ago,” said Waples, an assistant professor in UWM’s School of Freshwater Sciences. “An infinitesimal amount of radioactive fallout is still in the environment and we can measure that.”

While no longer a health hazard, these half-century-old atoms, called radionuclides, decay over time. How much time? It depends on their half-life – the amount of time it takes for half of the original material to decay.

In other words, water age at any tap in the city is proportional to the ratio of the daughter element to its parent in water at that tap, minus the ratio of the two elements in water leaving the treatment plant.

“The beauty of these radionuclides is that they are essentially clocks,” Waples said.

Water age can be modeled, but for accuracy, models should be calibrated with directly measured ages – data that can be difficult and expensive to collect using tracers like dye injected into the drinking water stream.

Using radionuclides as tracers, however, would make data collection much easier because they’re already in the water and measurements can be made anywhere at any time, said Kent Orlandini, a senior associate scientist at Argonne National Laboratory who is a co-author of a recent study on the subject funded by the National Science Foundation.

Once calibrated, models could help water utility managers find alternative water flow routes to reduce the time your next glass of water spends in pipes.

Although atmospheric nuclear weapons testing ended in 1962, Waples’ and Orlandini’s chemistry methods were used in 2012 to determine how much radioactive strontium leaked to the Pacific Ocean after the Fukushima Dai-ichi nuclear power plant accident in Japan.

Waples also is using fallout radionuclides of strontium and yttrium in a different research project – tracing the movement of nutrients and contaminants in Lake Michigan.

Other collaborators on the paper, published in the journal Environmental Science and Technology, were Jason K. Bordewyk, of Stantec Inc., and then-student Kristina M. Knesting, who is now a chemist at SC Johnson.