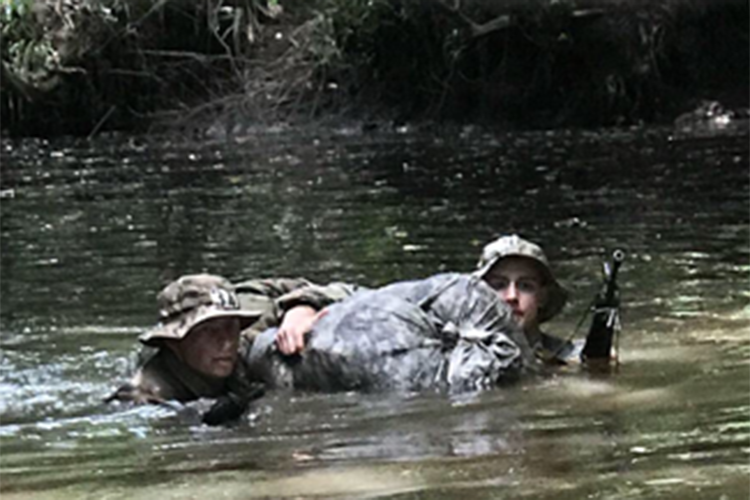 A recent UWM graduate is being honored as the top Army ROTC cadet in the nation.

“This is an amazing achievement that this program has never witnessed and is unlikely to repeat for years to come,” said Kiriazis.

Machkovech, who earned his degree in mechanical engineering, was one of nearly 6,000 cadets nationwide eligible for the honor. He was commissioned Dec. 18 as a second lieutenant in the army, and is currently attending the Infantry Basic Officer Leader Course at Fort Benning, Georgia.

“When I was younger, I knew I wanted to do something with the military for sure, but I also wanted to go to college,” Machkovech said. “So I was looking for options that would let me have the college experience, earn a degree and then join the military.”

ROTC fit the bill, and he joined the program at UWM in his first year. The first year of the program is an opportunity to try it out, but doesn’t involve any type of commitment.  As a freshman and sophomore, he participated in events and activities with the group. “I liked the environment and the teamwork. I decided this is for me,” Machkovech said.

In  his sophomore year, he earned a scholarship and a military contract from the army. The military contract committed him to a four-year service obligation when he graduated. The service could be active duty, Army National Guard or Army Reserves.

“I chose active duty because I wanted to do it full-time,” he said.

Although he had a few members in his extended family who had served in the military, much of his interest developed from reading books and watching movies, Machkovech said.

“I always thought of it as doing something that would be a worthy cause and serve a greater purpose.” Besides, he added, “you get to do cool things and travel to different places. It’s an adventure.”

His award was based on a combination of factors including academics, clubs and community service and athletic competitions in ROTC. From the time a cadet joins until graduation, these are all compiled into an operational metrics score.

“I had no idea where I ranked until just prior to them announcing it. I did not anticipate being ranked as the No. 1 cadet,” he said. Although he had a strong GPA – which is 40% of the score – he was in competition with multisport athletes, according to Machkovech.

“It was pretty surprising, but I’m pretty happy about it. It’s a rare thing to do. My mom’s very excited, telling all her friends.”

His family has been supportive of his career choice, Machkovech said. He has two brothers – one at UW-Madison and one a senior in high school.  His mother had some concerns initially because of the potential dangers involved, he said, but she felt better knowing he would be well prepared.  “She pushed me to keep doing my best.”

Machkovech chose UWM  from among several universities because he liked the campus and the engineering and ROTC programs. He also liked the fact that there was a large veterans and military community in and around the university.

He also found the atmosphere was accepting and his instructors were flexible when he had ROTC commitments. “They were always good about rescheduling exams and assignments.”

He’s aware of the challenges ahead.  “It’s intimidating because especially if you’re going into a combat scenario, you are responsible for those under your command, trying to make sure they get home safely to their families.”

However, he feels ROTC and his training have prepared him.

“ROTC focuses on broad leadership, how to be a good and effective commander. This basic officer leader course focuses on specific on-the-job training as an infantry officer, how to lead troops and present orders and prepare missions.”

Machkovech will finish his training at Fort Benning at the end of May, and may have some additional training before being assigned to his active duty station. Where he goes is up to the military, though he’s been able to indicate a few preferences – Vicenza, Italy, or Tennessee or North Carolina in the U.S. “I’d really be happy anywhere to get more experiences and see some of the rest of the world.”