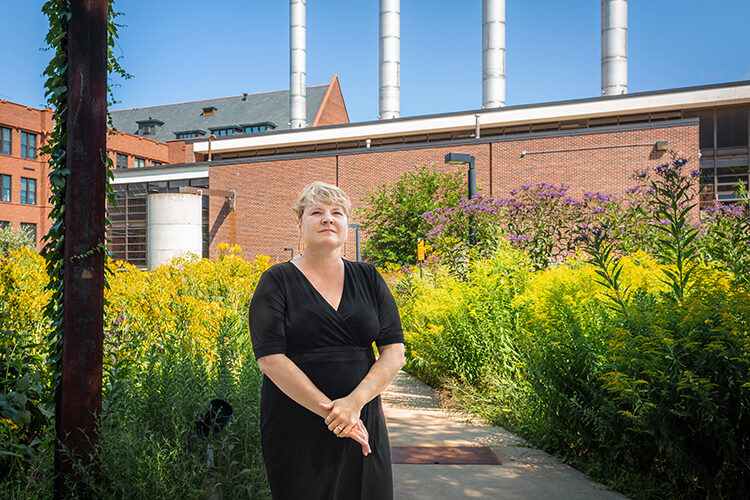 Kate Nelson, UWM’s director of sustainability, recently led the cross-campus effort to create a plan for the university to become “carbon neutral” by 2050 to do its part in the fight against global warming. She said UWM is on pace to meet its goals. (UWM Photo/Elora Hennessey)

As UWM works to become a carbon-neutral campus, it has a natural ally that few others can claim: Lake Michigan.

Lake water is piped in, circulates for cooling buildings and then is routed back to the lake. The system is easier on the environment and more efficient than more traditional systems. Even though the plant still must convert water to steam for heating, it spends much less on natural gas for cooling.

Enter the unknowns of climate change.

“Lake cooling provides a huge savings each year in cooling costs, which would otherwise be produced by burning fossil fuels,” said Kate Nelson, UWM’s director of sustainability. “Now the problem we face is an increased need for cooling, but a lake that’s also warming. At what point do we lose our advantage?”

Like many universities and municipalities, UWM aims to drastically cut its use of energy generated by burning fossil fuels and achieve a “net-zero” carbon footprint to curb global warming.

UWM’s Climate Action, Carbon and Resiliency Plan, which was recently approved by campus governance and the administration, is a road map for preparing for the effects of climate change while reducing the university’s carbon emissions. Only a few universities have such a two-pronged plan, Nelson said. The plan identifies some of the strategies that will help the campus meet its goals, such as boosting renewable energy sources and reducing solo occupant car commuting.

The plan’s ambitious goals include reducing greenhouse gas emissions by 45% from 2010 levels and whittling the vehicle emissions from commuting to campus by 2030 – only a bit more than seven years away. Further strategies will take the campus to carbon neutrality by 2050. Not all the answers are available yet, but Nelson said scholarship through both faculty research and student work will shape the actionable steps along the way.

To integrate teaching, learning experiences and research into the journey, UWM will establish an Institute of Climate Resilience, which will develop resources to build upon what UWM already offers in the curriculum and its labs, she said.

The campus already has made impressive gains in energy efficiency since 2010, a fact that gives Nelson confidence that the campus can meet its 2030 goals. UWM was the first institution in the UW System to establish an Office of Sustainability and the first school in the system to win the Green Ribbon Schools Award from the U.S. Department of Education.

Writing the plan began in 2019 with more than 90 campus and community stakeholders involved. The UWM group has forged other partnerships across the Milwaukee community so local organizations can share and coordinate their plans. For example, Nelson and John Gardner, policy analyst for the Office of Sustainability, were core members of the community group crafting the resiliency plan with Milwaukee Metropolitan Sewerage District. Once that process was completed, Nelson enlisted UWM students in a graduate urban planning course to enhance the plan.

We Energies, the utility that feeds electricity to the grid, produces only a small portion of power from green sources. So how can UWM take a bite out of these power-related emissions?

The answer, said Nelson, lies in part in joining a power purchase agreement. That’s where other universities and organizations also seeking to reduce their carbon footprint band together to buy green energy from a private vendor. UWM is investigating the idea with UW-Madison and other campuses, Nelson said.

Addressing the second largest slice of emissions – from the campus plant – would mean the natural gas now used to operate it would likely have to be replaced with greener sources. UWM has only a few green energy sources of its own.

Despite its drop in price, adding solar, also called photovoltaics, by itself won’t solve all of UWM’s carbon emissions problems, Nelson said. “Even if we covered all our roofs in solar panels, it wouldn’t cover our load,” she said.

That’s why further efficiency gains are as important to achieving carbon zero buildings as green energy, said James Wasley, professor of architecture and member of the planning committee.

“It’s not the integration of solar power, but the ultra-low energy demand that makes it possible to close the gap with solar sources,” Wasley said. “People only want to talk about supply – where the power comes from – but architecture is about reducing demand.”

Tackling emissions from single-occupant vehicles may be a heavy lift at a university where many students commute to campus. But Robert Schneider, professor of urban planning, believes that rolling back these emissions by 20% in the next five years is doable.

More than one-third of students already take the bus, he said. Many others live relatively near to campus. He hopes that promotion of the plan will bolster biking to campus in the next five years by making streets safer and providing a network of low-stress bikeways throughout Milwaukee that connect conveniently to campus.

Other aspirational ideas include working with the Milwaukee County Transit System to add more frequent flyer bus routes from the suburbs, connect new high-quality bus rapid transit routes to campus, or even investigate how to extend the Hop from its downtown route to include campus.

Another important step is to rebrand UWM as a campus dedicated to sustainability, Schneider said.

“This plan sets a vision for what we aspire to,” he said. “Some people are still going to need to drive to campus. But there are many people who can make a choice, so we should find ways to make walking, bicycling, and transit options more attractive.”

In the resiliency section of the plan, UWM will make operational improvements, such as updating its stormwater master plan.

But this part also includes anticipating how the university will address negative impacts on its students. Climate change could bring problems ranging from health risks and food insecurity to flooding and the safety of commuting in extreme heat without a car.

Getting students and researchers involved in resiliency problem-solving is one way to make progress, said Nelson. UWM offers 60 undergraduate courses in sustainability and more than 350 courses that cover some aspects of sustainability. Student study could begin with the very first step of updating needs based on the newest climate change projections, she said.

UWM already contributes research to the state efforts to green the fleet of vehicles through the university’s Center for Alternative Fuels, which is a test site for the state of Wisconsin Alternative Fuels Fleet Pilot Project. The center tests state-owned alternative fuel vehicles, comparing them to conventionally fueled but otherwise identical vehicles in similar service. Operating costs are tracked and emissions are periodically checked. The alternative fuels used in the program included Ethanol 85, Ethanol 10, natural gas and liquified petroleum gases such as propane.

UWM itself has a few flex-fuel vehicles, but the majority of its 100 vehicles take regular unleaded gasoline or diesel.

“We’re in lock-step with the state’s Clean Energy Plan, which includes steps to convert the fleet,” Nelson said.

• Plan for the campus heating/cooling plant of the future that can handle a higher demand for cooling.
• Achieve 100% renewable electricity both on-site and off-site.
• Reduce commuting emissions by 20%.
• Plan for student needs that are expected as a result of climate change.
• Update the campus stormwater master plan to meet current climate predictions.
• Mitigate flood and salt damage to buildings and steam tunnels.
• Establish an Institute of Climate Resilience to encourage interdisciplinary research and experiential learning around sustainability and adaptation.