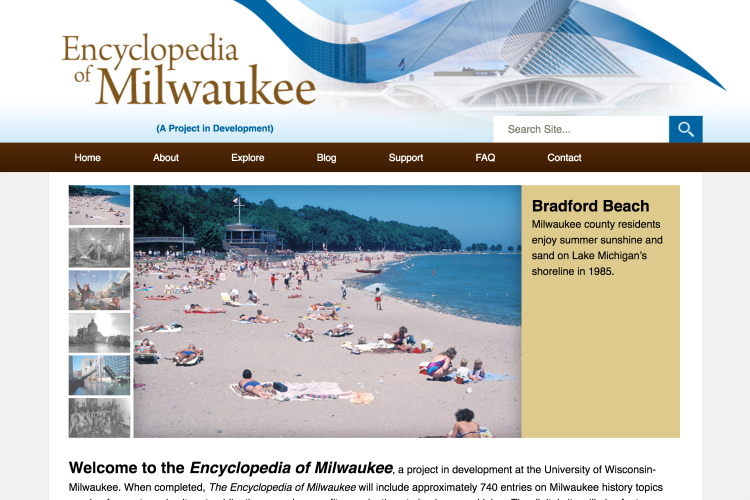 UWM researchers launched the online Encyclopedia of Milwaukee in the summer of 2016.

Health advocate E.R. Krumbiegel’s place in Milwaukee’s history may be obscured by time, but it’s made clearer in the Encyclopedia of Milwaukee, a project spearheaded by UWM historians Amanda Seligman and Margo Anderson. There, Krumbiegel shares pages with better-known figures such as home run king Hank Aaron, poet Carl Sandburg and aviator Billy Mitchell, the city airport’s namesake.

Begun in 2008, the online encyclopedia launched in the summer of 2016 with some 50 articles, a total that’s been increased on a weekly basis. That number will continue to expand, and a print edition is also being considered.

“One of the most gratifying things we have learned from working on this project is how devoted Milwaukeeans are to their history,” Seligman says. “It is exciting to share the region’s past with such an appreciative audience.”

As it grows, the online encyclopedia will feature hundreds of photos and illustrations, hyperlinks and suggestions for further reading. Readers can also comment and share recollections about the articles and their subjects. Like other encyclopedias, it’s not a narrative history to be read from start to finish, but a compendium of information meant to be browsed by the curious or consulted by researchers.

So you may not get Krumbiegel’s entire life story, but you’ll learn how the former city health commissioner helped revise the city’s building code after World War II. And that he “was committed both to eliminating ‘blight’ and ensuring access to safe, decent, and affordable housing, and whose housing code was an innovative model for other cities.”

Articles are written by local experts, freelance authors and student staff, and are subjected to rigorous editing and fact-checking by the encyclopedia’s editors and students. The encyclopedia also has a Facebook page – search for “Encyclopedia of Milwaukee” – and a Twitter feed at @MkeEncyclopedia. The project is supported by UWM, the National Endowment for the Humanities and the Greater Milwaukee Foundation.