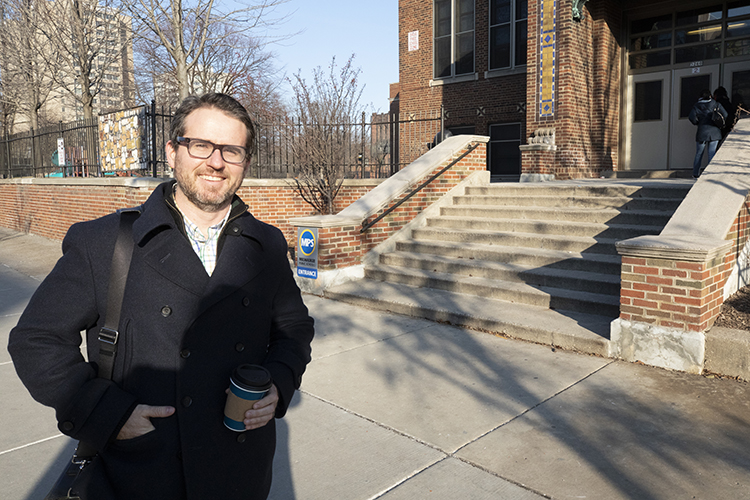 Curtis Jones is director of the Office of Socially Responsible Evaluation in Education at UWM. (UWM Photo/Troye Fox)

African American and Latinx K-12 teachers in Wisconsin are more likely to leave their schools than their white counterparts, according to a study by UWM education researchers.

The report also found that African American teachers feel lower levels of trust with fellow teachers than white or Latinx teachers, which likely factors into the higher likelihood of leaving for African American educators.

The results can provide direction to Wisconsin schools to create environments that help recruit and retain teachers of color. Doing so has the potential to narrow Wisconsin’s wide achievement gaps, said Curtis Jones, director of the Office of Socially Responsible Evaluation in Education. He noted previous research showing that teachers of color have higher academic expectations of students of color than white teachers do.

“At least in part due to those expectations, having at least one experience of having a teacher of color throughout elementary school of the same racial background makes you much more  likely to graduate high school on time and go to college,” Jones said. “So it has a lasting impact on these students.”

Intersection of race and trust

The report, titled “Race, Relational Trust, and Teacher Retention in Wisconsin Schools,” looks at the intersection of race and trust within schools for possible explanations into the lack of diversity in the public teaching ranks and the challenge of retaining diverse educators.

The statewide numbers are skewed because 71% of black teachers and 39% of Latinx teachers work in the diverse Milwaukee public school district. Outside of MPS, only 0.6% of teachers are African American and 1.3% are Latinx.

Overall, 86% of Wisconsin schools do not have African American teachers, and 83% do not have Latinx teachers. Only 10 schools across the state do not have any students of color.

“If you keep them for two years, you’re pretty much keeping them for the long term. We know that a lot of this is about trust, but what are the things that happened in that school that resulted in less trust,” Jones said in echoing the need for more study to answer those questions.

Among other key findings:

The report suggested the importance for Wisconsin schools to explore solutions to increase diversity, such as grant programs for persons of color to receive teacher training, and the need for teacher preparation programs to recruit and graduate diverse students.

The study called for school districts to create work environments for educators that promote retention and trust among teachers from diverse backgrounds. Districts should provide educators with implicit bias and cultural competency training that focuses on relationships between educators, the report said.

Such efforts can help address the underlying issues behind the alarming statistic of Wisconsin having the largest achievement gap between black and white students in the nation.