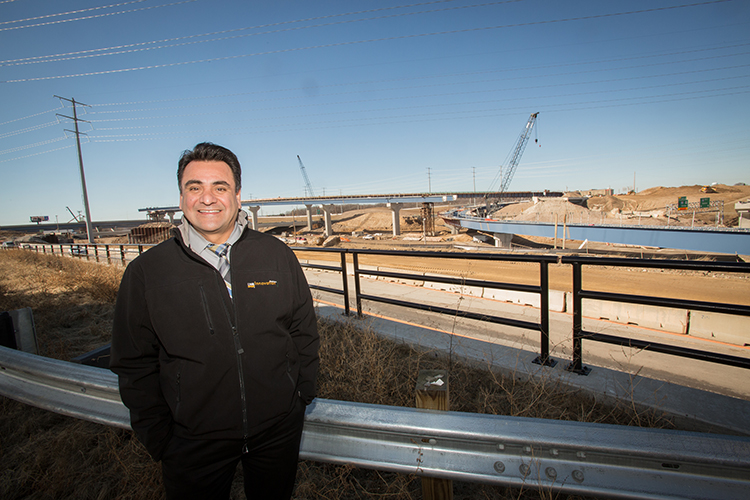 The Zoo Interchange affects not only the 350,000 drivers who pass through it daily, but the 30,000 employees, patients and families at the nearby Milwaukee Regional Medical Center. Then there are the Milwaukee County Zoo’s thousands of daily visitors, UWM’s Innovation Campus employees and visitors, and even the members of a small church in the area.

Bob Gutierrez is leading the Wisconsin Department of Transportation team that’s building the four-level, $1.7 billion-dollar project. He’s the DOT’s southeast freeways chief, has been with the DOT for 26 years, and is a UWM engineering alum. The Daily Reporter, a newspaper covering the construction industry, recently honored him as its Engineer of the Year.

“Bob has been wonderful to work with,” said Bob Simi, the medical center’s executive director. “Through his leadership, he has helped minimize the impact of the Zoo Interchange project on our employees, patients and visitors.”

Gutierrez’s DOT co-workers nominated him, citing his abilities to bring major projects in on time and, often, under budget. On the Zoo Interchange project, for example, he has saved $600 million from the original $2.3 billion budget for the interchange, which is 65 percent completed.

Gutierrez said his work always involves thinking about people – not just the structures. One example he’s proud of is the pedestrian bridge over Watertown Plank Road to the medical center.

The bridge was built as part of the Zoo Interchange project and provides a better way for all pedestrians to cross a busy road, including families staying at Ronald McDonald House and Children’s Hospital. “It truly hits home how we affect people’s lives in a positive manner,” he said.

Regarding budgeting issues, Gutierrez said the engineering team “put on their thinking caps” to shave that $600 million off Zoo Interchange costs without compromising safety. Using innovative wall designs helped to reduce the amount of land needed, which helped preserve an entire neighborhood community, a school and small church.

Gutierrez said UWM gave him the foundation for a great career. The seventh child of eight in a Mexican-American family, he was the first among them to attend college. “My father and mother never had the opportunity to go to college, but they did very well for themselves.”

Although his parents were supportive and led their own successful lives, college was outside their realm of their experience. Gutierrez loved math and science, but his parents thought that might be a good base for a career in the skilled trades.

Instead, he rode the U-Bus across Milwaukee to UWM’s campus and worked toward a civil engineering degree, graduating in 1987. He remains a proud supporter of the university, and remembers the faculty members who encouraged and taught him, including Alan Horowitz (now associate academic program director) and Edward Beimborn and Donald Sherman, who are professors emeriti.

The university’s student chapter of the American Society of Civil Engineers helped him learn more about careers in the field, and a DOT student internship led to his current career.

“Everything I learned in my core classes applied to my work building roadways,” Gutierrez said.

The communication courses he took at the university have also helped, since so much of what he does requires working with community leaders, citizens and others affected by highway construction. “UWM really prepared me for the next level of leadership,” Gutierrez said.

He’s been married to Joan for 30 years, and they have two children, Roberto Juan and Christina, both professionals. In fact, he said, Christina plans to start working on a master’s degree in architecture at UWM in the fall.

As his career has developed, Gutierrez has shared his experience by mentoring younger engineers and young Latino professionals through the Hispanic Professionals of Greater Milwaukee. It supports Hispanic students in the Milwaukee area, and he serves on its board of directors.

“I’m very proud of my Mexican heritage,” Gutierrez said. “I like working with students and helping them achieve their goals.”