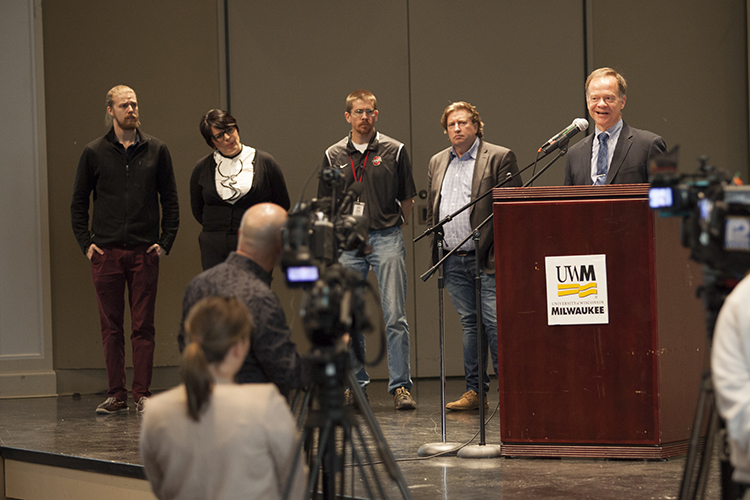 Scott Emmons, dean of the Peck School of the Arts, talks about the support from the community after fire struck the theater building. (UWM Photo/Pete Amland) 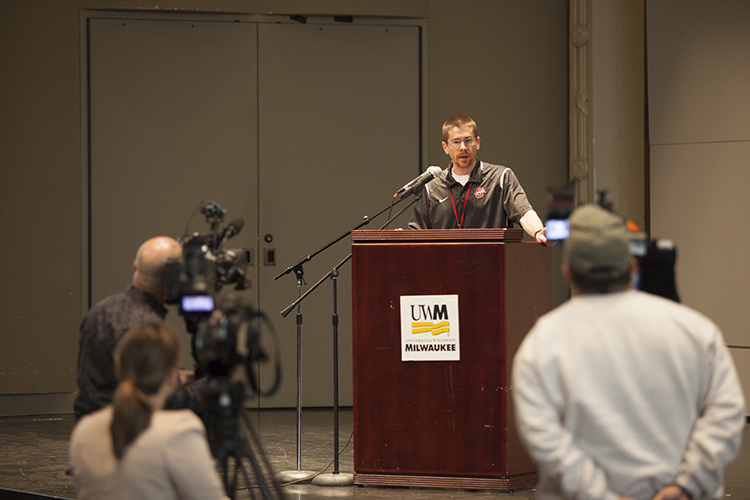 Shorewood High School Principal Tim Kenney talks about offering use of his school’s facilities to build the set for “Arcadia.” (UWM Photo/Pete Amland) 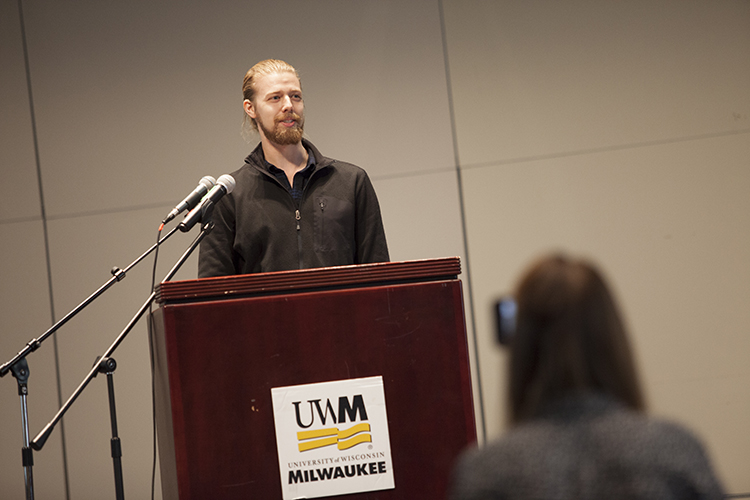 Senior Thorin Ketelsen, who plays Bernard Nightingale in “Arcadia,” said he was thrilled that the production will be at the Rep. “I didn’t know it’d be as great a place as the Rep. That was an amazing surprise,” he said. (UWM Photo/Pete Amland) 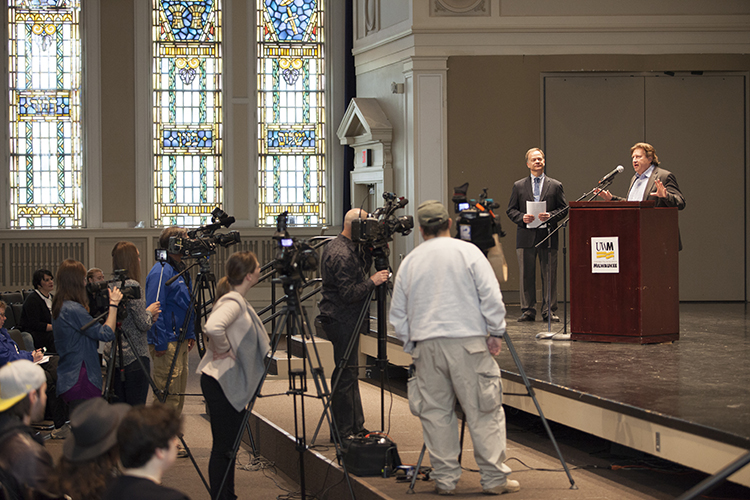 Mark Clements, artistic director at the Rep, said staff began calling soon after the fire to ask how they could help. “We at the Rep have the responsibility to hold up our citizenship,” he said. (UWM Photo/Pete Amland) 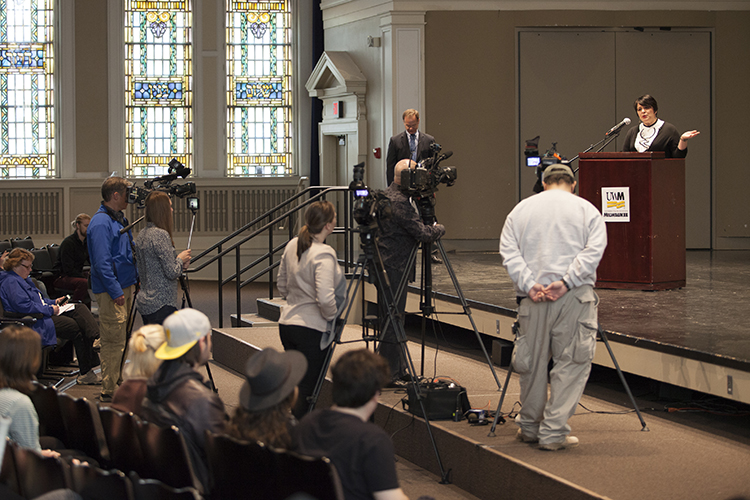 Michelle Lopez-Rios, who is directing the UWM production of “Arcadia,” talks about the effects of the fire during a news conference. “We didn’t stop rehearsing,” she said. “We thought even if we have to perform on the beach at the lake, the show will go on.” (UWM Photo/Pete Amland) 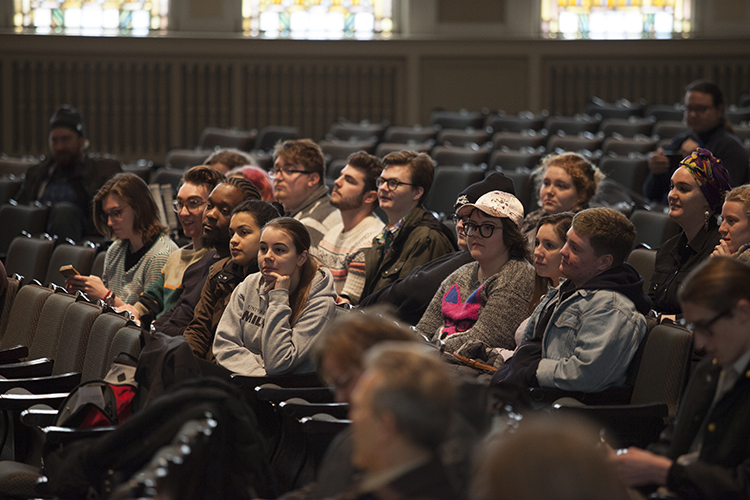 Thanks to overwhelming community support and hard work, the Peck School of the Arts production of “Arcadia” is rebounding from a catastrophic fire and will open as scheduled on May 3.

The play, originally scheduled to run May 3-7 in UWM’s Mainstage Theatre, will instead be performed in the Stiemke Studio, the second-largest of the Milwaukee Repertory Theater’s three theaters with 200 seats. The opening will require students to rebuild sets, prepare costumes and alter staging and lighting plans in less than three weeks.

The on-time opening of “Arcadia” is being made possible by a partnership between UWM, the Rep and Shorewood High School, which is providing space for students to work until the Stiemke Studio is available. 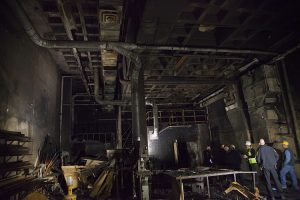 “The Rep’s invitation allows our students access to not only perform in a world-class facility, but the opportunity to work side-by-side with professional theater staff,” said Scott Emmons, dean of the Peck School of the Arts.

“These experiences build more than sets – they build character and strategic and flexible thinking. Those skills aren’t easily taught in a classroom.”

The Rep is also donating access to dressing rooms, work space, a reception area and the use of its lobby and ticketing system.

“We at the Rep have the responsibility to hold up our citizenship,” said Mark Clements, the Rep’s artistic director. “The morning after the fire I received calls from Rep staff asking, ‘How can we help?’

“We are looking forward to hosting the students and staff of UWM and learning from their resilience and dedication to the arts.”

Appreciation for the help

Emmons and UWM Chancellor Mark Mone expressed deep appreciation for the many acts of support from UWM faculty and staff, theater groups around the state. Alumni around the country have also responded.

Emmons and Clements both said the best way to help in the near term is to support the students’ production at the Stiemke.

Senior Thorin Ketelsen, who plays Bernard Nightingale in the production, said that he and his fellow students were focused on how the production would go forward, not whether it would.

“It was sad, but I knew we would find a place to do it,” he said. “I didn’t know it’d be as great a place as the Rep. That was an amazing surprise.”

The play’s director, Michelle Lopez-Rios, praised the resilience of the students, faculty and staff.

“We didn’t stop rehearsing,” she said. “We thought even if we have to perform on the beach at the lake, the show will go on.”

The resilience and the broad support has lent special meaning to the production for her.

“This play is essentially about the human condition and how we try to figure it all out,” she said. “I think it’s absolutely appropriate that we will tell this story under these circumstances where the human spirit has lifted us and held us in a time of great need.”

The fire, which broke out late Saturday, destroyed the Theatre Department’s set/scenery shop behind the theater, causing extensive smoke and water damage to the rest of the theater building, and lesser smoke damage to the upper floors of the art and music buildings. The “Arcadia” sets were destroyed, but many costumes and props were salvaged, though smoke remediation will be necessary.

The three buildings’ basements are connected, and the fire suppression system caused flooding in all three, but water damage was minimal in the art and music buildings.

The fire forced the cancellation of classes in the music, art and theater buildings. More than 180 classes relocated by the Peck School of the Arts have remained on campus, as will most recitals and performances. Most the PSOA’s more than 1,700 students were affected, as were many of the 500 students from other schools and colleges who take art courses.

The theater building, which sustained more than $1 million in damage, will likely remain closed until the fall semester.

The music building, which is farthest from the fire, is expected to be cleaned and reopened on Monday, April 17. The art building is expected to reopen few days after that.

It had been feared that a massive cache of archival photos and other materials stored in the scenic shop was lost, but in fact most had been moved to the UWM archives some time ago.

“Certainly things were lost, but the bulk of it is safe and sound,” said Michael Doylen, director of the UWM Libraries and interim associate vice provost. “We know we have photos, programs, and records from 1956 to 2014. And there are very few gaps.”

Departmental and music students’ instruments are largely unscathed, as are the bulk of art students’ projects and materials.

“I’m thrilled by the way my colleagues and the school are stepping up to this, the way all faculty – art and design, music, theater – are dealing with this,” said Theatre Department chair LeRoy Stoner.

“Our UWM students are incredibly resilient,” he added. “They’re taking it in good spirit, and digging in and continuing their classwork.”

“I teach theater history, and I’m going home to work on a mini-module for my class about all the theaters that have burned down,” he said. “Shakespeare’s theater, The Globe, burned down twice, maybe three times.

“They burn down, we rebuild them. That’s what we do.”