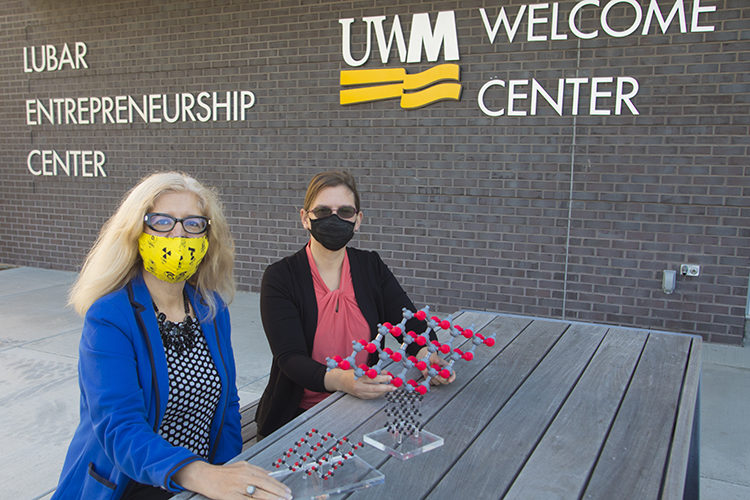 It currently takes an hour to charge the lithium-ion batteries in an electric car. Imagine being able to do that in only a fraction of the time. Two UWM physicists have developed a material that can deliver that performance.

The material, which is being marketed as Cophite, boosts the batteries’ energy storage capacity when it’s used in one part of the rechargeable batteries. This allows for quicker charging, longer life and improved safety.

The U.S. Department of Energy recently awarded funding to COnovate for a collaboration with the Argonne National Laboratory in suburban Chicago on research that will help COnovate commercialize the material.

The 2D atomic structure of Cophite accommodates more lithium ions than the graphite currently used in the negative end – the anode – of a li-ion battery. Cophite enhances the transport of lithium ions, increasing performance while reducing shorts between the battery’s negative and positive sides, which can lead to fires.

Compared to graphite anodes, those made with Cophite charged the batteries six times faster and doubled their lifespans. Now the researchers need to identify how best to manufacture the large amounts needed for commercial sustainability.

“The most we can produce in the lab are teaspoons,” said Gajdardziska, who is also the dean of UWM’s Graduate School. “Realizing the benefits of Cophite requires large amounts. This project will bring the synthesis out of the academic lab into a pre-commercial scaled-up process.”

COnovate is one of 13 private companies awarded Department of Energy funding to partner with a national laboratory on clearing engineering and manufacturing hurdles for advanced battery materials and energy storage technologies.

“These projects will bring advanced battery technologies closer to the point where consumers can benefit from them,” said Greg Krumdick, director of Argonne’s Applied Materials division.

The DOE grant is the latest recognition for COnovate, which has won two rounds of federal Small Business Technology Transfer funding and a Small Business Innovation Research Advance grant from the state of Wisconsin. In October, COnovate was chosen as one of 10 finalists among more than 380 nominees in the Wisconsin Innovation Award Program.