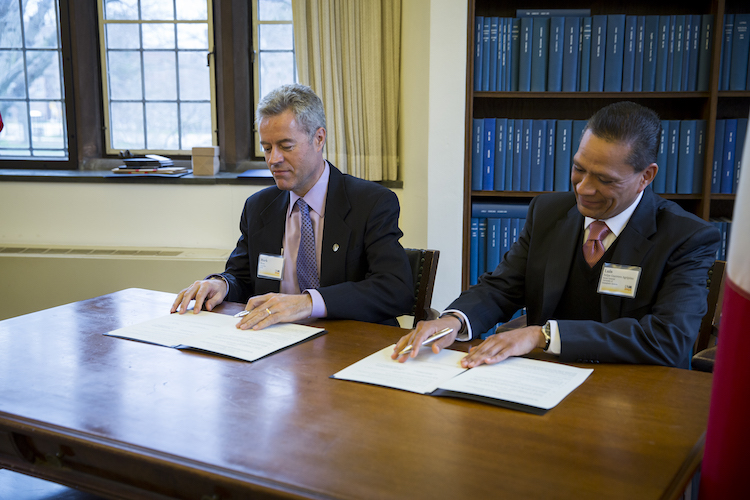 Since 2008, University of Wisconsin-Milwaukee nursing students have made regular trips to Mexico’s University of Guanajuato. There, they learn about health care in Latin America and strengthen their Spanish-language skills. It’s just one example of UWM’s ties to Mexico, and those ties just grew stronger.

UWM Chancellor Mark Mone and Luis Felipe Guerrero Agripino, rector general of the University of Guanajuato System, announced a memorandum of understanding between the institutions on Wednesday, April 27. It paves the way for multidisciplinary collaborations, expands study-abroad opportunities for both student bodies, and bolsters business partnerships between Wisconsin and Mexico, the Badger State’s second-largest trading partner.

Mone said an initial focal point is “engaged partnerships that matter locally,” noting that nearly 70 Wisconsin companies actively do business with Mexico. “We hope this partnership can help strengthen those relationships.”

Agripino, who’s led the University of Guanajuato System since late 2015, said signing the agreement was a “very special moment.” He noted the similarities between UWM and his university, which has a college-level enrollment of some 17,000 students.

“Both are public universities that require a strong commitment to society,” Agripino said in remarks translated by Javier Tapia, UWM associate professor of educational policy & community studies. “Universities provide a forum for discussion of all points of view. They have a great responsibility to society and humanity as a whole.”

Tapia has played no small role in the budding partnership. In 2001, he invited the Mexican state’s then-governor, a former University of Guanajuato rector general named Juan Carlos Romero Hicks, to UWM for an official visit. Tapia also helped arrange the planned opening of a Mexican consulate in Milwaukee, which will happen later in 2016. And earlier in April, current Guanajuato Gov. Miguel Marquez appointed Tapia as Guanajuato’s ambassador to Wisconsin.

Milwaukee’s thriving Mexican community is an anchor for the state’s Hispanic population, which stands at 6.34 percent of the total population, making it Wisconsin’s largest minority group.

“Today’s signing is a very important event in the history of UWM, history of Milwaukee, history of the growing Mexican population in the state of Wisconsin,” Tapia said Wednesday. “It’s important for the government sector to work in collaboration with the business community in order to prepare the labor force for the 21st century.”

UWM’s College of Nursing will remain a key player in that push, and a water institute at the University of Guanajuato is planning collaborative work with UWM’s School of Freshwater Sciences.