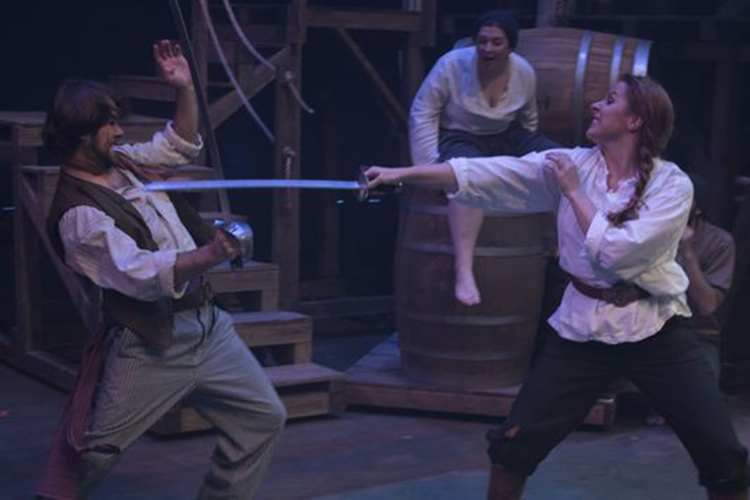 Zach Thomas Woods and Alicia Rice square off in a scene choreographed by Christopher Elst in a production of “Bonny Anne Bonny.” (Photo courtesy of Traveling Lemur Productions)

When director Christopher Elst choreographed swordfight scenes for “Bonny Anne Bonny” at Milwaukee’s Theater Red, he wanted to make sure that audience members thought that they were going to witness a murder, while never actually fearing for the actors’ safety.

His goal? To make the audience believe that the characters are really trying to kill, or at least seriously injure, one another.

“Even those people who are experienced in theater will say, ‘I can’t believe you let that person hit that other person,’” Elst said.“And I say, ‘I didn’t, it was fake.’”

Elst, who graduated from UWM with a bachelor’s in literature and cultural studies, has built a career in theater, both as an actor and fight director, over the past two decades. He’s performed dozens of roles in theaters in the Milwaukee area, including Oliver “Daddy” Warbucks in a Sunset Playhouse production of “Annie”and Gaston in a Lakeland Players production of “Beauty and the Beast.” In 2013, he co-founded Theater Red with his wife, Marcee Doherty-Elst.

But it’s his specialty of choreographing both fight and intimacy scenes that has had him working on numerous productions throughout southeastern Wisconsin. He’s one of the few doing so.

As a theatrical combat instructor, Elst prides himself in creating safe spaces for actors to learn how to fight safely, and giving them the power to speak up when asked to do things that they are not comfortable with.

“There was a moment where one of the actors that I worked with on ‘Bonny Anne Bonny’ didn’t feel comfortable with what was happening onstage while she was in another, unrelated production,” Elst said. “She called me and asked what she should do, and she was very comfortable advocating for her own safety and for the safety of the other actors and of the audience. That is what I’m trying to do; I’m trying to create a world where actors feel safe advocating for their own safety, especially in the world we’re currently living in.”

Elst is a strong proponent of creating safe spaces where actors can learn to fight safely and convincingly onstage. He has trained in taekwondo, Krav Maga, and tai chi, and draws inspiration from each of these diverse martial arts styles when choreographing theatrical violence, which he considers a “modern martial art.”

A certified teacher with the Society of American Fight Directors and associate instructor with Dueling Arts International, Elst has taught numerous workshops throughout Wisconsin and Illinois, and has choreographed and directed fight scenes in over 100 theater productions, including “Romeo and Juliet,” “The Pirates of Penzance” and “Fiddler on the Roof.”

His style of instruction places emphasis on actors’ and directors’ inherent strengths, and gives them autonomy to bring their own creative visions to life.

“As a stage violence teacher, Chris is an outstanding facilitator of enthusiasm and excitement,”said Jared McDaris, a playwright, actor and director who has collaborated with Elst on numerous occasions. “I think his sense of humbleness and focusing on others is helping to forge a bright new generation. I’m seeing a lot more focus on the arts and the artists from the newer generations of directors, and I think role models like Chris are largely responsible for that.”

In order to make fight scenes believable onstage, the actors have to believe in what they are doing, and trust their scene partners and director, so that they feel comfortable taking risks. Elst’s teaching style takes this into account, and the combination of empowerment and skill that he concocts paves the way for fight scenes that leave the audience on the edge of their seats.