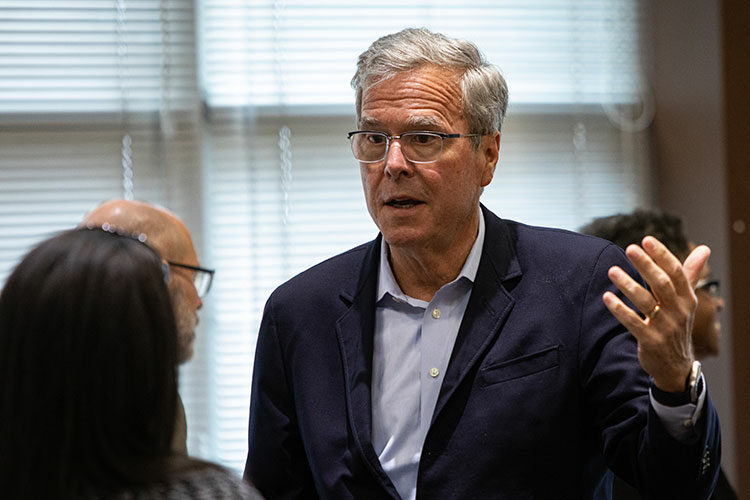 Former Florida governor and presidential candidate Jeb Bush met with students and spoke about world affairs during a visit to UWM at Waukesha. (UWM Photo/Troye Fox)

A visit from Jeb Bush gave UWM at Waukesha students a rare opportunity to absorb history and political lessons from a former governor who once ran for president.

Bush served as Florida governor from 1999 to 2007 and unsuccessfully sought the Republican nomination for U.S. president in 2016. He spoke with students and community members during a visit April 7 to the Waukesha campus sponsored by the Tommy G. Thompson Center on Public Leadership.

Before an evening lecture, Bush met in a closed session with a group of about 30 students, answering their questions and sharing his political experience. Among the students’ concerns: how policymaking seems to be set by an older generation of Americans who have different priorities from younger citizens.

“I’m really interested in how we (students) interact with older generations,” said Dennis Smith, 21, who is working toward a bachelor’s degree in communication, “and how similar we are and how different we are. He was elected governor of Florida the year before I was born. So there are a lot of changes in the country now.”

Smith, who leads the Student Advocacy Association at the Waukesha campus, said his interest in politics is as a global citizen. He was among a small group of students who chatted with Bush in the hallway before the meeting began. Smith said he was impressed by how ordinary the former governor seemed and how interested he was in talking to them.

“I remember when he was speaking, I looked around the room and there was no security. No, nothing. Just us,” Smith said. “Whether you agree or disagree with him, I think that’s commendable. And he was very good at explaining things in a way where you don’t feel like you’re being spoken down to.”

Izabella Robertson, 19, is studying history, and she attended Bush’s meeting with students. She said she appreciated the rare opportunity to have such a discussion with a high-profile politician.

“You want to be able to dig down and to truly understand what they are thinking,” Robertson said. “You judge historical figures (you’ve never met) in one light, but when you get to talk to the actual person, that really increases your level of understanding.”

Robertson said Bush is particularly interesting to her because his brother and his father both served as U.S. presidents.

“I thought it was interesting that he said one of his go-to leadership qualities was intellectual curiosity,” Robertson said. “That hit me because that’s why I like history: You have to know about the past if you’re going to be able to deal with the present.”

Kristian Zenz, 18, was happy that a politician of Bush’s status visited UWM at Waukesha.

“To have a name like that, a member of the Bush family and someone who ran for president, come to speak here is really cool,” said Zenz, a published poet who is pursuing English and marketing. “You could feel the energy and the excitement that students had.”

A chance to observe leadership

Zenz attended to get a sense of the issues and decision-making process of those who govern.

“I look for every opportunity to observe leadership, whether it be someone that I follow religiously or even someone I may disagree with because it’s nice to see all sorts of perspectives,” Zenz said. “You can’t make your own decision until you have a clear understanding of all the others that came before.”

The Thompson Center funds scholarships and research throughout the UW System and brings speakers to UW campuses outside of Madison.

The center, said director Alexander Tahk, also an associate professor of political science at UW-Madison, is dedicated to engagement from both side of the political aisle for the public good. Speakers it sponsors often address education and issues facing rural communities.