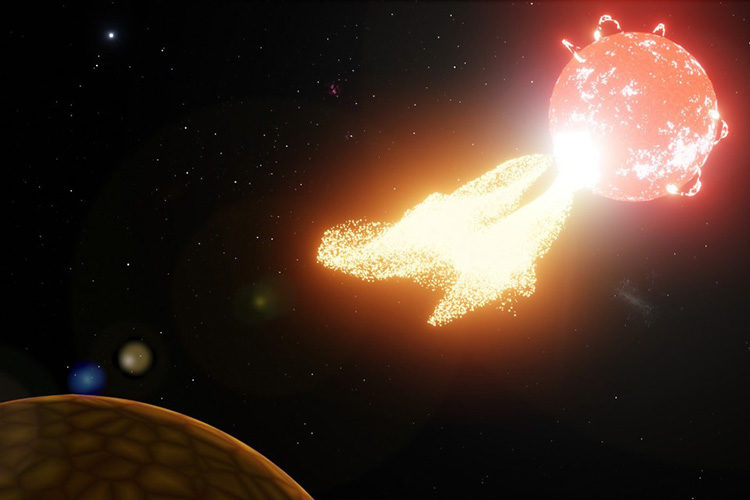 If you wanted to look for life on planets around stars other than our sun, known as exoplanets, you would first locate the ones in the “Goldilocks zone.” That’s the area – not too close, not too far – at just the right distance from a star where a planet might have liquid water.

Unlike the sun, most stars in the Milky Way galaxy are small, relatively cool red dwarfs – called M dwarfs. Proxima Centauri, the sun’s closest neighbor at only 4 light years away, is an M dwarf with two exoplanets that could be habitable.

However, stars, including M dwarfs, emit flares – brief but powerful eruptions of intense electromagnetic radiation that occur on the stellar surface. And, at least for the sun, these components of “space weather” are accompanied by clouds of ionized gas that could harm life.

“Whenever our sun emits such bursts, it also shoots out clouds of gas,” said Kaplan. “So we are pretty sure now that when we see such bursts from other stars they are also shooting out similar clouds.”

The work makes it possible for the first time to produce space weather reports around nearby stars outside the solar system – and it brings new information to bear on the search for habitable exoplanets.

Even though Earth is protected by a magnetic field, space weather from the sun can still affect communications, transportation and the electrical grid. M dwarfs have many more flares, and the habitable planets are much closer in, making them more vulnerable to dangerous radiation, said the paper’s lead author, Andrew Zic, of the University of Sydney.

“This is probably bad news on the space weather front,” Zic said. “It seems likely that the galaxy’s most common stars – red dwarfs – won’t be great places to find life as we know it.”

“Before now, there was no direct way to monitor space weather from another star,” Kaplan added, “so we did not know how bad the problem really was.”

Published Dec. 9 in The Astrophysical Journal, the research also was done in collaboration with the Commonwealth Scientific and Industrial Research Organisation, the University of Western Australia, University of Colorado and Curtin University.