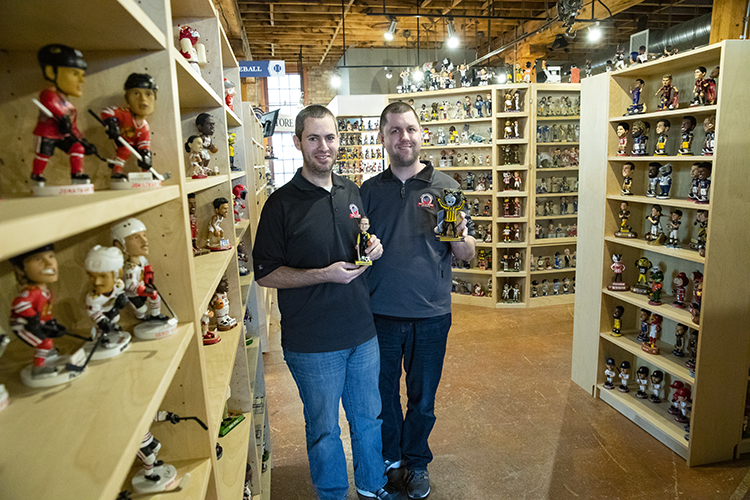 UWM grads Phil Sklar (left) and Brad Novak show off their bobbleheads of UWM superfan Michael Poll and UWM mascot Pounce. The bobbleheads are among some 7,000 at the National Bobblehead Hall of Fame and Museum, which they opened in February 2019 in Walker’s Point. (UWM Photo/Troye Fox)

What do Pope Francis, Aaron Rodgers, the Teenage Mutant Ninja Turtles, Pounce and Queen Elizabeth have in common?

The answer’s easy: They all have their own bobbleheads.

They’re among the tens of thousands of sports figures, famous leaders, celebrities and just plain interesting people who’ve been turned into miniature versions of themselves, with large heads attached to a spring that makes them, well… bobble.

University of Wisconsin-Milwaukee alum Phil Sklar saw a business opportunity in all those bobbleheads, especially when his own collection grew to 3,000 and began overflowing his living room, dining room and even the kitchen. He and his partner, Brad Novak, also a former UWM business major, have opened the National Bobblehead Museum Hall of Fame and Museum in Milwaukee’s Walker’s Point at 170 S. 1st St. on the second floor. They also manage an online site dedicated to history, information, listings, sales and basically everything bobblehead-related.

“There’s nothing like it in the world,” said Sklar, who is co-founder and CEO of the museum. “It’s unique.”

Sklar started out collecting baseball cards when he was a youngster. When Novak brought him a bobblehead from a minor league team he was working with at the time, the Rockford Riverhawks, Sklar’s interest turned to the funny little figures. Novak and Sklar started collecting more, going to Brewers and Admirals and Wave games, traveling to major league sporting events and searching out bobblehead days at other venues.  Sklar estimates he had around 100 bobbleheads by the time he graduated from the Lubar School of Business in 2006 with his BBA in finance and minors in communications and economics.

In 2014, he quit his job to get the museum up and running and manage the bobblehead business. Fans donated their collections, sometimes up to 1,500 at a time. In addition to the website and the museum’s display of nearly 7,000 bobbleheads, Sklar works with teams and corporations to license and produce the bouncy figures.

He found, he said, that there was a niche in producing short runs of figures who were trending in popularity. For example, Novak saw a story in the Chicago Tribune about Sister Jean Dolores Schmidt, the then-98-year-old nun who was the chaplain of the Loyola University-Chicago men’s basketball team, which made an unexpected trip to the NCAA Final Four in 2018. The story said the university wanted to update its Sister Jean bobblehead.

Novak and Sklar reached out to Loyola Chicago to produce the bobblehead, and the Sister Jean bobblehead was quickly on the market, becoming the best-selling sports-related bobblehead in history.

Most recently, Sklar and Novak organized a Kickstarter campaign and are working with the Negro Leagues Baseball Museum in Kansas City on bobbleheads to commemorate the 100th anniversary of the Negro National League. The Kickstarter concluded Jan. 7, reaching just over $75,000 — well above the initial $10,000 goal.

The history of bobbleheads

The bobblehead museum includes a section dedicated to the history of the bobbleheads and information on how they’re made.

According to Sklar, while historians aren’t quite sure of the origin of bobbleheads, the earliest can be traced back to figurines in Queen Charlotte’s dressing room at Buckingham Palace in the 1760s. Others trace them back to the “temple nodders,” figures showing Buddha and other religious figures in Asia. Sports teams and celebrities began using them to market themselves during the 1960s – a rare set of Beatles bobbleheads is a highly valued collectible today.

At first bobbleheads were made of ceramic or bisque or papier maiché, but once they began to be made more easily from polyresin, they really took off. Since 2015, there is even an official National Bobblehead Day, developed by the museum, on Jan. 7.

In 1999, the San Francisco Giants gave away a bobblehead of Willie Mays at a game, and major and minor league teams soon found attendance boomed on bobblehead days, said Sklar.

Bobbleheads spread to the entertainment field and pop culture, created in the likeness of all kinds of mascots and well-known figures – there are even sets of Supreme Court justice bobbleheads. Sklar made a set of bobbleheads of the characters from his favorite movie — “Home Alone.”

The bobbleheads commemorate individuals – there’s a bobblehead for Michael Poll, UWM’s “Superfan,” as well as one of Pounce, the UWM mascot.  And some celebrate moments – Aaron Rodgers and three of his “Hail Mary” passes, and Robin Yount on his motorcycle after the Brewers won the 1982 American League pennant.

While the bobbleheads can be made fancier – by adding a voice or sound, for example – the basic concept remains straightforward: a likeness with a large head and a spring inside to make the head jiggle when touched.