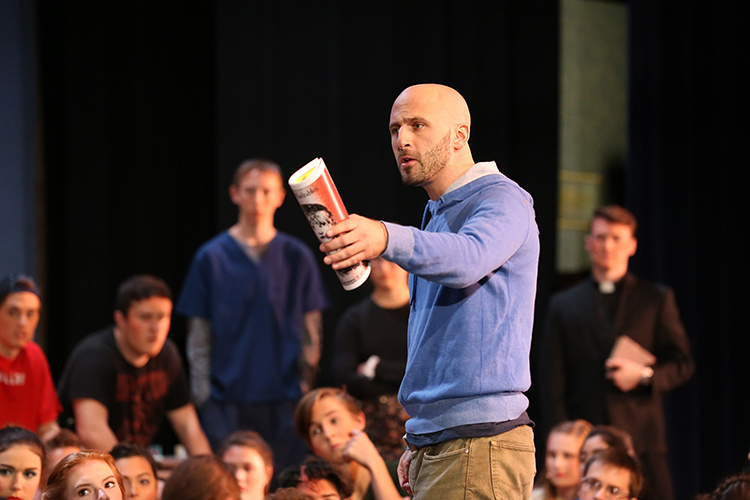 UWM grad Brandon M. Rockstroh is directing a cast of more than 80 students in his original musical theater production, “The Book of Empty Pages.” (Photo courtesy of Jessica Krcmar)

Though there are notable exceptions, many high school musicals are filled with fun and frivolity.

A Green Bay high school, however, with the help of a UWM alumnus, is tackling drunken driving and domestic violence in the premiere performance of a pop musical.

“The Book of Empty Pages,” which runs Nov. 24 through Dec. 9 at Green Bay Southwest High School, was written and is being directed by Brandon M. Rockstroh, who earned his degree in music from UWM’s Peck School of the Arts.  He is the high school’s choir director.

Green Bay Southwest, which has a strong tradition of music and theater, is celebrating the 50th anniversary of its musical theater productions, and the “The Book of Empty Pages” is one of two major performances for the year.

The musical, which was submitted for entry into three national music festivals, is the culmination of a long-time dream for Rockstroh.

“Writing a musical was a life goal for me,” said Rockstroh, now 31 and the father of two. He got the idea for the show from real life experience. His best friend’s sister was caretaker for a victim of a drunken driving accident, and the sister and patient fell in love.

Rockstroh took that basic premise and fictionalized it, adding conflict and drama to the characters’ lives through domestic violence, a critical parent and divorce. He spent the summer of 2016 writing the script and composing the music, often working in his basement until the early hours of the morning. Trusted professional advisers in writing and theater gave him feedback on the words and music as he kept revamping and revising.

When the play was almost ready, Rockstroh went to his high school principal and asked if the school could stage the musical, warning him about some of the challenging themes.

“When I approached my principal he said, ‘I trust you.’ I hope and wish that all principals would do that, but I know that’s not always the case.”

Rockstroh’s own interest in musical theater was sparked in high school when he joined the choir.

“I took it for an easy A,” he said with a laugh. “Then I decided music was what I wanted to do for a living.”

When he came to UWM to pursue that goal, he auditioned and landed the lead role of Tony in “West Side Story.”

“That was a huge experience for me to take part in something at a completely different, much more professional level than high school.”

His career focus was not to go to Broadway, but to become a high school teacher and share a passion for theater and music with students.

“My goal as musical director is to give students a wide span of what theater can be — comedy, children’s theater, serious drama, musicals, opera, all that stuff.”

He credits UWM with inspiring him in his teaching and directing.

“My life was changed by choosing to go to UW-Milwaukee,” he said. “The music professors that I studied with there changed the type of teacher that I became. They pushed me on a journey not just to be status quo, but  to always think about raising the bar for myself and for the program that I’m in.”

The 80-some high school students involved in the production of “The Book of Empty Pages” are identifying with the themes and issues, said Rockstroh.

The play opens with everybody partying, followed quickly by a drunken car crash that leaves Sam, a recent college graduate and one of the two main characters, seriously injured.

In his first number, Sam sings about the decisions that led to the devastating accident. “That’s a scenario they can all identify with,” said Rockstroh, “how small choices can really impact the rest of their lives.”

In his journey to recovery, Sam becomes part of a rehabilitation program – the “empty pages” of the title refer to a journal that he’s asked to keep to track his recuperation.  At first, he’s reluctant, but then begins to slowly rebuild himself and his life. Daisy, the other main character, is a therapist who works with him. She is suffering in an abusive marriage, unable to leave because of pressures from a conservative pastor father who doesn’t believe in divorce.

“Sam and Daisy fall in love. They take something that was terrible for them and turn it into a beautiful, life-changing experience.” The two real-life people who inspired the play plan to be at the premiere performance, according to Rockstroh. Although they’re no longer together, they are still good friends.

For Rockstroh, the play has been a labor of love.

“I have fallen in love with the story and the impact it could have on an audience,” he said. “That’s what I want to succeed.”

For more information about the “The Book of Empty Pages” and performance times, go to thebookofemptypages.com.