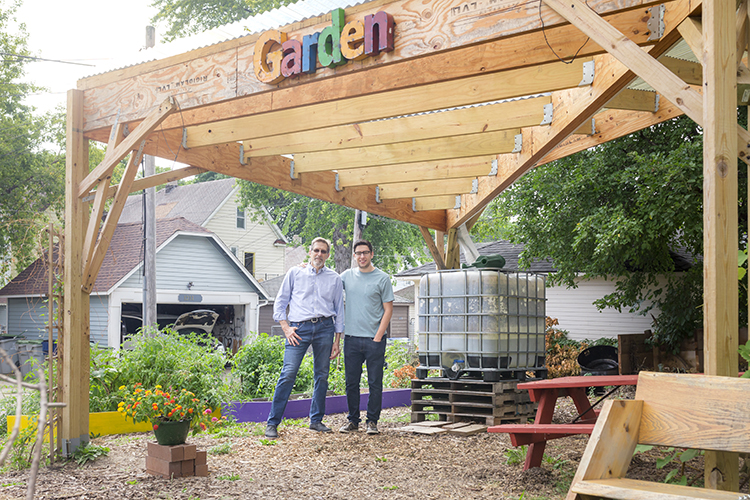 The water gazebo that John Miceli (left) and son Max helped design and build helps save rainwater for a community garden in the Clarke Square neighborhood on Milwaukee's south side. (UWM Photo/Elora Hennessey)

What happens to young people when they become too old for foster care and need to find an affordable place to live?

The answers aren’t always easy, but Journey House — with the help of a University of Wisconsin-Milwaukee alumnus — has come up a creative solution that is not only helping these young people, but also improving the neighborhood.

John Miceli, who graduated from UWM with his master’s degree in architecture in 1986, helped Journey House turn four old houses in the near south side’s Clarke Square neighborhood into homes for those aging out of foster care.

Journey House led the innovative project, which involved a collaboration among Milwaukee County, the City of Milwaukee, community and neighborhood partners, Milwaukee Public Schools, the police department and YouthBuild, a construction training program partnership between MATC and Journey House.

Miceli, a longtime board member of Journey House, was integral to the effort, Bria said, helping with the designs for the housing and volunteering to oversee the renovations.

“Now we have some affordable housing for these talented young people who don’t have a place to live, and we’ve taken abandoned, ugly property and turned it into beautiful houses,” said Bria.

Miceli agrees. “That was kind of a win-win-win situation for all of us, for us and for Journey House and the youth aging out of foster care,” he said.

Miceli, who retired from Eppstein Uhen in August 2016, said he enjoyed the opportunity to help restore fine old houses with “beautiful bones.” In fact, Milwaukee’s housing stock was one of the factors that attracted the Chicago native to graduate school in Milwaukee.

While at Eppstein Uhen, he had worked to renovate houses in the Harambee and Lindsay Heights neighborhoods, and this, though a smaller-scale project, tied in with that interest.

“There is some beautiful craftsmanship in this city that has deteriorated and we are letting it slip away, so this was something I wanted to participate in,” he said.

Miceli had become interested in Journey House when he was working on a Neighborhood Schools Initiative 15 years ago and met Bria, who was also involved with the initiative. While the project they were involved with didn’t work out at that time, she recruited him to the Journey House board of directors.

Miceli, in turn, has recruited his son, Max, a senior in UWM’s School of Architecture and Urban Planning, to help out in another neighborhood improvement project.

Journey House wanted to build a structure to collect rainwater in barrels to keep the community gardens across the street blooming.

“We could have just designed something that looked like a garage,” Miceli said, ‘’a real simple building that would be easy to do, but we could also do something a little more fun. So, Max and I played with it for a while, and we ended up using his design on a rain gazebo.”

The gazebo has helped make the garden a community gathering spot, according to Bria.

Since he retired, Miceli said, he’s continued to be an active volunteer. That is partly because he wants to give back, but also because it’s an opportunity to meet new people and learn about their lives. He has done work with Habitat for Humanity’s Global Village, for example. “It’s not only another country, but another culture and way of building you’re exposed to.”

In Milwaukee, he’s had the opportunity to meet some of the young people who moved into the completed houses. And, when his son was a child, two of his best friends were foster children, later adopted by their foster families, giving the Micelis some empathy for their situation.

“It’s a different way of life,” John Miceli said, but with the help of Journey House, the new residents are learning the ins and outs of having a home — including simple things like remembering to take the garbage to curb on the right day. It’s a challenge for some, he said, “but there are some you wish were your tenants if you were a landlord.”

They’re living on very meager incomes, but they can also be very creative. “This one kid designed all the furniture out of different stuff that he found — really interesting stuff.” 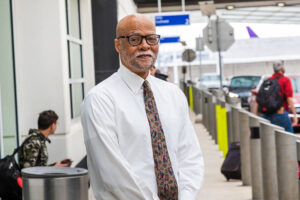