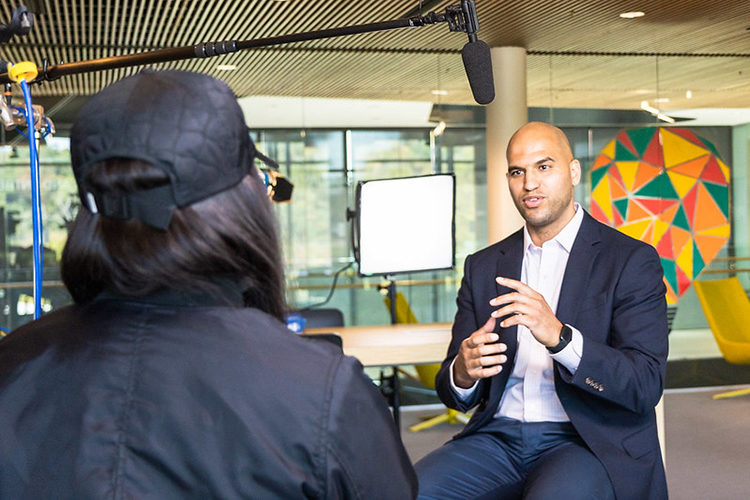 Yusuf Dahl credits Larry Schultz, a senior lecturer at UWM, with helping him when he needed a boost. “Without Larry, I would never have been able to go to Princeton.” (Photo courtesy of Yusuf Dahl)

One teacher can make a difference.

When he was working on his master’s degree at UWM, Yusuf Dahl ran into a temporary roadblock in a business mathematics course.

Dahl, who had spent time in juvenile detention and prison before turning his life in a better direction, found help from Larry Schultz, a senior lecturer in Mathematical Sciences who took him under his wing and helped him prepare for the Graduate Record Exam he needed to further his education.

“I reached out Larry via email and we got together at the Noodles & Company on Oakland,” Dahl said. “He tutored me one-on-one. Princeton took a chance on me, but without Larry I would never have been able to go to Princeton. He is one of those people who takes the intimidation out of math. He made it fun.”

After earning an MBA at UWM in 2014 and taking part in the UWM entrepreneurship program, Dahl completed a degree in public policy through Princeton University’s Woodrow Wilson School of Public and International Affairs in 2017. He is now the director of the Dyer Center for Innovation and Entrepreneurship at Lafayette College in Easton, Pennsylvania.

In November 2019, his story was featured on journalist Robin Roberts’ “Thriver Thursday” segment on ABC’s “Good Morning America.” The segment spotlights “thrivers” – people who persevere, achieve their goals and even surpass them despite life-altering circumstances, according to the program’s website.

Dahl grew up in Milwaukee in what he calls “chaotic” circumstances. His mother, who had a chemical and alcohol dependency, was raising three sons on her own.  His father was incarcerated. In a misguided effort to try to bring in some money, Dahl started dealing drugs. At age 18 in 1998, he was sentenced to 10 years in prison. In the “Good Morning America” segment, he recalls sitting in the sentencing room surrounded by other prisoners who had no control over their futures – “every one of them was either brown or black.”

Dahl, now 39, made up his mind that day that he would build a different life for himself, and education was an important part of his plan. “The day of my sentencing was the start of a new trajectory in my life.”

When he got out of prison after five and a half years, he started going door-to-door at local businesses and applying for work. “I was just out of prison, young and black and had no skills.” But he eventually got a minimum-wage job with a temporary agency. He had taught himself computer skills while in prison. After he received certification from Microsoft, he applied that work to a two-year program for adult learners at Ottawa University where he received a bachelor’s degree in 2008. A few years later, he came to UWM for a master’s degree in business administration.

“It’s a great institution, well-respected, and it was local,” Dahl said. At UWM, Dahl became involved in the entrepreneurship program.

Schultz, who considers Dahl a friend, recalls him as “very bright, super-motivated and concerned about others.” The two still get together when Dahl is in Milwaukee.

Dahl’s interest in helping others took shape when he began working to rehab and manage property in his old neighborhood in 2010 through his own business, Milwaukee Metro Management. Dahl learned how to do repairs through YouTube videos and worked to rebuild his community, which was then struggling with the foreclosure crisis.

As part of those efforts, he became involved with housing trade associations and traveled to Madison to work with politicians on housing issues. Those experiences led to  his decision to pursue additional education at Princeton so he could try to influence housing policies.

“I felt I needed more academic credentials to really make systematic change,” he said. During his time at Princeton, Dahl served as a teaching assistant in a class on social entrepreneurship, was co-leader of the service committee of the Wilson School’s graduate student government body and traveled to Berlin to assist with the Princeton-Fung Global Forum. He also balanced the master’s program with raising his daughter, Chloee, now 11 years old.

At Lafayette College, he is working to build a culture of social entrepreneurship that can help make changes in the Northeast corridor in communities like the one he grew up in. The goal, he said, is to develop innovative, entrepreneurial students who are willing to take intelligent risks in changing the world.

An obligation to give back

Dahl is now a member of the Easton Mayor’s Affordable Housing Task Force. He also serves on the board of trustees of the Petey Greene program, which recruits university volunteers to serve as academic tutors and teaching assistants at correctional facilities.

Because of his own experiences, says Dahl, “I have always felt an obligation to give back.”

Most recently, he has become involved in a collaboration between the City Center of Allentown and Lafayette in the “real estate lab.” The goal of the program, says Dahl, is toprovide a pathway to participation in real estate entrepreneurship for those who have historically been excluded because of lack of networks, knowledge and capital.

“So far we’ve raised a million dollars to invest in young folks who go through the program and demonstrate the drive and commitment to their community to make a difference,” Dahl said.