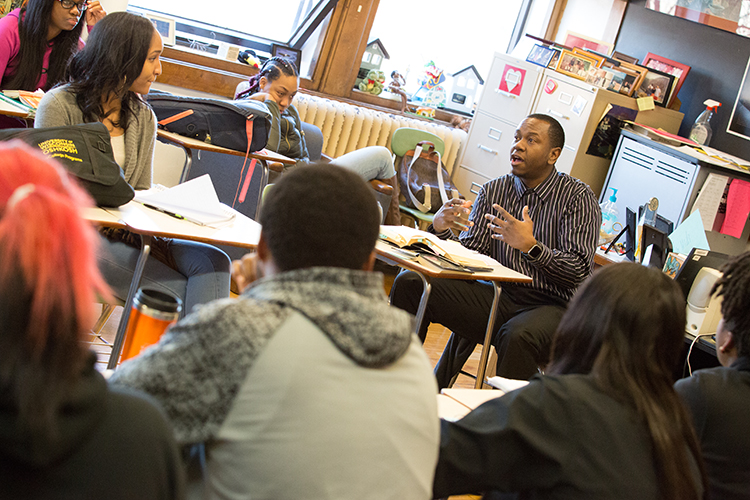 Nate Deans, a UWM alum and English teacher at Riverside High School, says that it's important for students, particularly male students, to see teachers who look like him. (UWM Photo/Troye Fox)

Reuben Harpole Jr. and Nate Deans are generations apart, but they share a common passion — improving urban education and increasing the number of African-American male teachers in classrooms.

Harpole taught for years after earning his UWM bachelor’s degree in education in 1978. He and wife Mildred also helped found more than 25 community centers and programs promoting education as the ultimate equalizer. Along the way, Harpole mentored countless young African-Americans.

Among them is Deans, who carries one of the many torches Harpole lit. A 2011 graduate of the School of Education, he’s an English teacher at his alma mater, Riverside University High School in Milwaukee.

“Teaching gives me the opportunity to look at Milwaukee and see hope and change,” Deans said. “People of color who care for these kids and see them as people and not statistics are needed in our schools. These students need hope and vision.”

Since 2007, the Reuben K. Harpole Jr. Education Scholarship at UWM has invested $25,000 in the college education of young black men interested in teaching. Deans benefitted from that scholarship in 2009, with Harpole saying, “It’s important for all of our children to see positive African-American role models, men who are professionals, qualified and good teachers.”

Harpole received the Alumni Association’s community service award in 2016 and an honorary doctorate of humane letters in 2005. “He is phenomenal,” Deans said. “No one becomes successful on their own. There’s always been someone before you on the path. His scholarships are crucial in motivating students.”

Deans knows so many teachers play a role in their students’ lives, but he believes it’s especially important for African-American students, particularly male students, to see African-American male professionals in their classrooms. He’s often walked into a high school class for the first time and noted the surprise in some students’ eyes.

“I may be the first African-American male teacher they have ever seen,” he said.

Deans often brings his students to events at UWM, introducing them to a variety of cultural activities and the possibility of college in their own futures.

He’s humbled when students tell him he’s the reason they come to school. “I hope they see a teacher who actually cares about them,” Deans said. “They don’t get to see many educated black men teaching, and I get to be this person for them.”