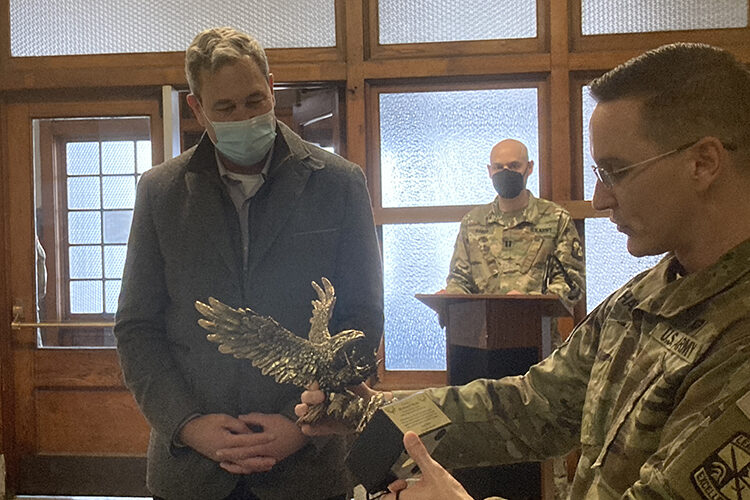 When he was in high school, Brian Winski didn’t have the most stellar grades, he recalls.

“My counselors suggested I might be interested in plumbing because they told me, ‘People are always going to need plumbers.’”

Instead, Winski decided to pursue higher education and a career of service to his country, and he’s never looked back.

Winski joined the Army Reserve when he was in high school and used the GI Bill to go to UWM, where he joined the Army ROTC program. He was commissioned as a Regular Army infantry after earning his bachelor’s in history in 1989.

In December 2021, the recently retired two-star major general was inducted onto the Wall of Fame for the Golden Eagle Battalion of ROTC. That battalion includes students from Marquette, UWM, UW-Parkside, Milwaukee School of Engineering and Concordia. Winski is the first UWM alumnus to become a two-star general and command an Army division.

He won many honors and awards as a cadet and was selected as a Distinguished Military Graduate from UW-Milwaukee Army ROTC in 1989, according to Jason Haggard, current leader of the Golden Eagle Battalion and assistant professor of military science at Marquette University.

Winski sustained that high level of success throughout his 37-year Army career, Haggard added. “His induction to the Golden Eagle Battalion Wall of Fame is a recognition of all he has accomplished.”

Tours in Afghanistan and Iraq

Winski completed wartime tours of duty in both Afghanistan and Iraq. While in the Army, he also earned his master’s degree in history from Louisiana State University and studied at the Army War College for a year as part of a Washington Institute for Near East Policy fellowship.

He served as the chief of the Army’s legislative liaison team for the Office of the Secretary of the Army, leading over 200 people who helped maintain the Army’s connections with Congress.

Over his career, he received numerous medals and commendations, including the Distinguished Service Medal, Legion of Merit (with two Bronze Oak Leaf Clusters), and the Bronze Star Medal for Valor with five oak leaf clusters.  He was awarded the Ranger Tab, Master parachutist wings, Air Assault wings, and the Combat Infantryman’s Badge with star.

Through it all, Winski said, he thinks his decision to join ROTC and come to UWM was pivotal.

“I’m proud to be a soldier. If I had to live my life over, I’d do two things the same – I’d marry the same woman and join the United States Army.”

Winski and his wife, Kimberly, have lived in 18 different homes since they were married, but returned to Wisconsin in retirement because they have friends and family here.

“We both just love Wisconsin, and particularly the greater Milwaukee area…the work ethic, the values of the citizens and the great communities here.”

“I have lifelong friendships that I made with fellow students at UWM and in ROTC,” he said. Several of his friends have also served in the Army, law enforcement and as first responders. “We all have this sense of service we learned at UWM and through ROTC.”

The Winski family’s two children adapted to a life in the military that required frequent moves, he said. “They are incredibly strong and resilient.  They have a network of friends all over the world. We’re proud of both of them.”

Both their son and daughter have followed the family tradition of military service. Kathryn is a platoon leader at Fort Carson and flies Black Hawk helicopters. Andrew is an infantry platoon leader in the 82nd Airborne Division at Fort Bragg, North Carolina.

In retirement, Winski plans to continue his interest in leadership development, volunteering with the Golden Eagle Battalion and serving as a mentor for Army exercises. He is a board member or advisor for several companies.

He’s just starting work on a project that will combine his interest in history and leadership – joining corporate leaders on major battlefields to talk about and apply the lessons learned on those sites.

Winski is grateful to UWM for the background it gave him.

“I was a history major, which helped me appreciate and understand history and the lessons drawn from history that we can apply today. It was a great education, and the quality of training and additional education provided by ROTC really set me up for success.”