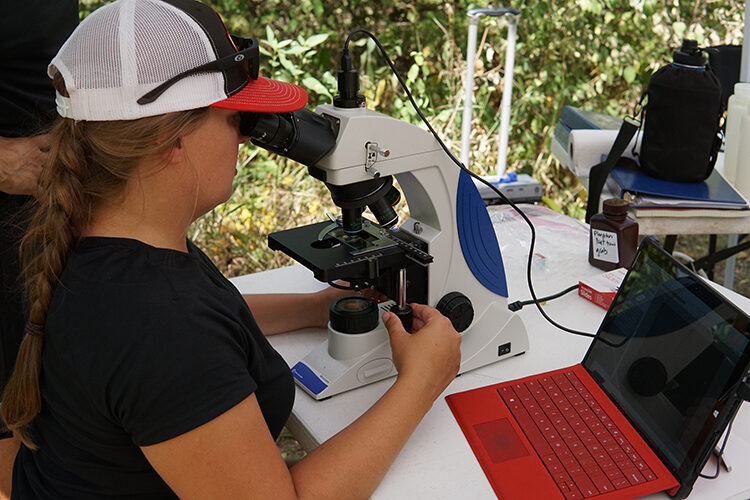 The work Kaytee Pokrzywinski (Boyd) did at UWM on toxic algae led her into the field of marine biology. She’s now chief of the Harmful Algal Bloom Forecasting Branch for National Centers for Coastal Ocean Science, part of the National Oceanic and Atmospheric Administration. (Submitted photo)

When John Berges, professor of biological sciences and freshwater sciences, had a paper published recently, he made note of some of the undergraduate researchers who worked with him in ways large and small on the project over the years. They are included as co-authors of the paper.

The paper, published in the journal PLOS ONE, included data collected from 2005-2019.

Many of the young researchers who started in Berges’ lab have gone on to their own careers in science-related fields.

The paper describes the finding that bottom-dwelling green algae (the ones that wash up on the beaches and cause problems occasionally) are also (surprisingly) involved in the cycling of the mineral silica, something that is normally only associated with microscopic algae that live in the upper waters of the lake, Berges said.

“What’s notable is that this work was begun and completed largely due to a group of undergraduate researchers beginning in 2005,” he said. “Their stories are quite fascinating.”

For example, Kaytee Pokrzywinski (Boyd), is now chief of the Harmful Algal Bloom Forecasting Branch for National Centers for Coastal Ocean Science, part of the National Oceanic and Atmospheric Administration.

Her work on toxic algae at UWM led her into the field of marine biology, she said. After completing her undergraduate work at UWM, she went on to earn a doctorate from the University of Delaware in 2014.

“I would say my undergraduate academic training prepared me for a professional career,” she said.  “It gave me that essential foundational knowledge early on in freshwater biology. I don’t specifically study Cladophora (a nuisance alga) anymore, but I still use the skills I gained in the lab.”

That early research also helped her better understand how science relates to people’s lives, she said.

In her current work, she is helping NOAA develop ways to forecast when and where potential algal blooms may occur. In Florida and along the Gulf Coast, some of these blooms may become aerosolized, affecting people with respiratory issues. The work she does, Boyd said, will help people know when it’s safe to be on the beaches.

“It’s so complex, and there are so many different avenues they (the algal blooms) can develop, she added. “The forecasting really helps provide information to the public to stay safe.”

Berges credits Ben von Korff with helping inspire the research. Von Korff was a UW-Madison student in the Research Experience for Undergraduates (REU) program run by UWM scientists Russell Cuhel and Carmen Aguilar at what was then the WATER Institute. “His original observations on diatoms on Cladophora and measurements of silica content in 2005 is what started the project,” Berges said.

Von Korff is now a water quality specialist at the Water Resources Center at Minnesota State University-Mankato, studying the Minnesota River basin. He focuses his research on data analytics as a tool in managing environmental issues, and just recently finished a master’s degree in data science. He also has a master’s degree in marine biology.

He credits his undergraduate research with helping him prepare for the different directions his career took.

“It was one of the first research experiences I had,” he recalled, so he learned out to develop and follow laboratory protocols, and how to write a report and give a presentation when he was finished.

“Dr. Berges gave us tips on all these things, especially how to write well,” von Korff said.

Just as important, the research experience helped him look at options, von Korff said. “The REU experience gave us exposure to potentially different career pathways. As an undergrad I saw that water quality research was one path I could pursue. I think undergraduate research is useful. Even if you work on a summer project one semester, you may not do that for the rest of your life, but just getting exposure to a lot of research experiences is helpful as a scientist.”

Jessica Quinlan credits undergraduate research with helping her develop an interest in science. Her career took a different direction than water quality, however. When she graduated in 2010 with a major in conservation and environmental science, the job market was tight. She did some part-time work in forestry with local parks but continued her college job as a cashier at Kohl’s Department Store.

When a full-time position with benefits as an assistant manager opened up, she took it. Kohl’s had a sustainability and volunteer program, so she continued supporting the parks through volunteer hours and Kohl’s donations.

The idea of corporate responsibility is gaining traction as part of the effort to reduce the impact of climate change. Quinlan notes that Kohl’s has had its Sustainability Team in place for the last decade and has long had a commitment to being a responsible business.

In addition to these students, others who were credited as co-authors on Berges’ paper are:

Emily Guinn, an REU student in 2006 from Macalester College.  She went on to earn a PhD, worked at De Pauw University until 2020 and is now an associate senior consultant engineer at Eli Lilly and Company in the Particle Design Lab in synthetic molecule design and development.

Allison Driskill, a doctoral candidate in biological sciences advised by co-author Erica Young, helped to complete and compile the data set.  The research received a Wisconsin Sea Grant award in 2018.

“We were able to write up the work for publication during a (pre-pandemic) sabbatical leave at the University of Tasmania, funded by a UWM Research and Creative Activities Support award and a U. Tasmania fellowship,” Berges said,” based on marine aspects of this undergraduate-driven work.”

UWM established the Office of Undergraduate Research in 2008 to coordinate a variety of undergraduate research opportunities throughout the university.