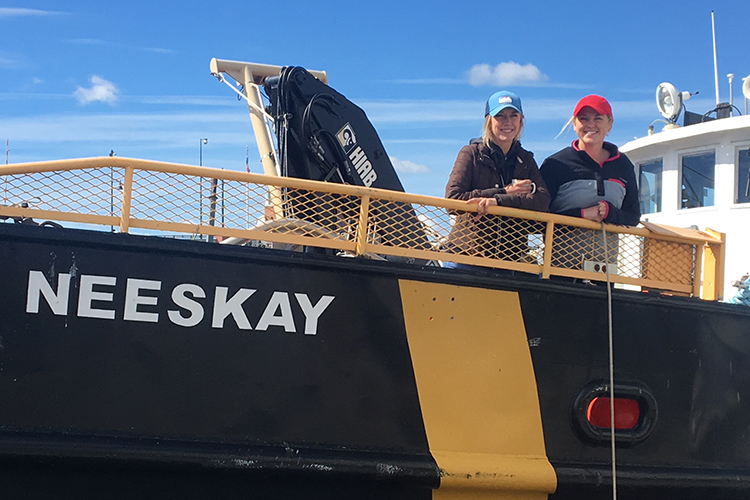 Despite her young age, Julia Robson is well-educated on the near-destruction of the Great Lakes during the 1960s and ‘70s when industrial pollution was not well-regulated. So when cuts to funding for the Great Lakes were proposed earlier this year, Robson and fellow UWM alum Alyssa Armbruster wanted to do something “large-scale” to raise awareness of the natural resource we sometimes take for granted.

The pair, who both work in urban land restoration for the Milwaukee County Parks System, decided they would hike 332 miles from Milwaukee to Lake Superior, stopping at locations the Environmental Protection Agency has identified as “areas of concern.” At each spot, they hope to talk with local governmental and community groups. They depart on Aug. 26.

They also have attracted the interest of local filmmakers at Rayni Day Productions, who are producing a feature-length documentary about Great Lakes conservation. Several faculty members at UWM’s School of Freshwater Sciences are expected to appear in the documentary.

Robson recently talked about what motivated her and Armbruster to work on the Walk to Sustain Our Great Lakes.

Where did this outreach idea come from?

At a coffee shop I heard some people talking about budget cuts to the EPA, and one of them said, “Well, all the EPA does is test car emissions.” It struck me as a true example of the lack of information the public has about natural resources. In fact, in my job, I’ve worked with inner city youth in the summers who see the Lake Michigan for the very first time when they intern with us. And yet they live only a few miles away.

What has affected your advocacy for the Great Lakes?

I grew up in Miami on the Atlantic Ocean and came to Milwaukee after high school. At UWM, I double majored in biology and conservation and environmental science. Because I lived in the RiverView dorms, I could walk down to the space overlooking the lake near the old water tower. Looking at it reminded me of staring at the ocean. So Lake Michigan connected me to home.

Why go on a hike?

I wanted to hike because it provides a very natural segue into a great conversation you can have about the Great Lakes. The nature of it draws attention to the cause.

What are some of the UWM research projects you will cover in the film?

A major focus is on nonpoint pollution sources and how they impact the Great Lakes. One location in the film has been on Green Bay, where we interviewed Val Klump and Jerry Kaster about their efforts to study the low oxygen conditions in the bay. We also joined their crew on the research vessel Neeskay to deploy a buoy that will monitor conditions in the bay continuously.

To discuss invasive species in the lakes we met with Harvey Bootsma and John Janssen. They explained how invasives can be a bad thing for the lake ecosystem, but then they also said they are seeing some natural adaptation. For example, perch are eating these little invasive shrimp as their traditional food source declines. So some invasives are filling a dietary niche that allows the native species to “make do.”

It’s similar to what we do in managing urban lands in the park system. Despite the invasives, you can still promote a healthy ecosystem if you’re vigilant. So it’s important to invest in the research in managed systems. Resource managers need that information to be able to predict how a species might respond to certain changes.

What is the main message you want to give people through this project?

I want to show how far we’ve come in restoring our freshwater, but also make the case that there’s a lot more that needs to be done. We don’t want to roll back on it. This is important because harm to the lakes is not as visible as it once was. Decades ago, you could see and smell the pollution.

If you don’t come from an ecology background, for example, you may not realize that what you do upstream in rivers and streams eventually makes its way into the lake. We want to show people the role they can play. We also want to inspire people to feel empowered to act and be a voice for the Great Lakes.

We’re going to be looking for grants to help finish the film and hope to submit it to the Environmental Film Festival in June 2018 or 2019. After that, my goal is to have film as widely available as possible. The project is also a fundraiser, with profits going to the Alliance for the Great Lakes, the Urban Ecology Center, and Discovery World in Milwaukee.

For more information, go to Wsogl.com.