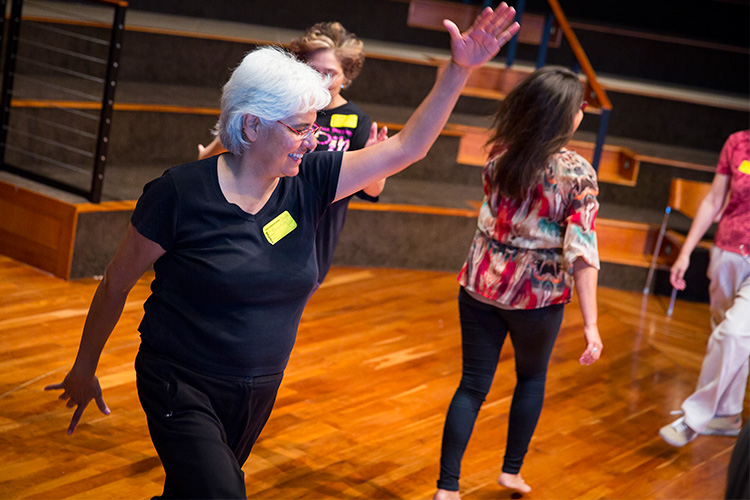 Electa Quinney is arguably one the most interesting – and important – figures in Wisconsin history. A member of the Stockbridge-Munsee tribe, she taught at the state’s first public school in Kaukauna 20 years before Wisconsin became a state in 1848. Now, she is the subject of a new play, by aboriginal Canadian playwright Alanis King.

In 2010, UWM established The Electa Quinney Institute for American Indian Education, which grew out of an endowed professorship in American Indian education through a gift from the Indian Community School in Franklin. With a professional development grant to help create a play about Quinney, staff members turned to King, a playwright and director who was the first aboriginal woman to graduate from the National Theatre School of Canada.

King spent a week in Milwaukee this summer, researching Quinney and conducting workshops with UWM students and staff and members of the Native American community. The result of that visit, “Morning Becomes Electa,” will be presented at 1 p.m., Nov. 11, in the Helene Zelazo Center for the Performing Arts, room 250, 2400 E. Kenwood Blvd.

Although “Morning Becomes Electa” will bear King’s name, preparing the script for the Nov. 11 staged reading was a collaborative process. Through Quinney Institute-sponsored workshops this summer, King explored what Milwaukee’s Native American community already knew about Quinney’s life and what they hoped to share about her with the world.

The collective knowledge provided by the workshop participants fast-tracked King’s research and writing process, she said. “Some of them had been in theater before, some were writers. There was the Wisconsin Poet Laureate (Anishinaabe poet Kim Blaeser), the academics who have the history, and Karyn Saemann who had written a book on Quinney. It was valuable to have all this input.”

Saemann’s book, “Electa Quinney: Stockbridge Teacher,” also contributed King’s research. Saemann had earlier given a talk on her book and research at UWM.

King sat with each of the workshop participants and asked what they wanted to see in the play. One element that resonated among them was the image of Quinney standing to one side of the stage while the events of her life play out on the other side. After returning home to Ottawa, Canada, King took the knowledge and creative ideas she had gathered and set to work crafting a compelling narrative.

Quinney’s chosen career posed a challenge. “You know, she was a teacher. She taught students. Where is the drama?” King asked, laughing. “That’s where the research by Saemann really came into play.”

Through Saemann’s groundwork for her book, King discovered that this quiet teacher’s life was indeed full of drama. Quinney’s tribe, the Stockbridge-Munsee, was forced to relocate from New York to Wisconsin around 1828, and faced discrimination among the state’s growing white population. Quinney’s first husband died early, as did the young daughter of her second husband. Most painful perhaps was the murder of her sister, Phoebe, by Phoebe’s husband, a member of a prominent French-American family. It is thought that Phoebe’s husband faced no legal repercussions for the killing.

King’s task became then to choose which of these events propelled the play forward. “There were great losses in her life and I had to omit some of the losses to move the story along,” King said. “And also to find some light. To find some levity is always an aim of my work as a playwright.”

“Morning Becomes Electa” is a work in progress, King noted, and she welcomes new collaborators. Although she had hoped to include some lines in Quinney’s native Stockbridge Mohican language, she resorted instead to some dialogue in Anishinaabe, a related tongue. “Maybe the Stockbridge people can fill in the language. That would be a really nice way to honor her and honor descendants who are still living.”

“It was a real honor to be asked to write about Electa Quinney because who she was, was never brought to the foreground,” King said. “I hope that the response could be enlightened people who love the theater want to see subsequent drafts and ultimately a world premiere.”

It was the Native American students at UWM who started this effort, King said. “They were asking who Electa Quinney was, really driving the project.” Her upcoming trip to UWM brings the project full circle. King says she is looking forward to being the writer in the audience, watching others bring this collective work to life. “It’s actually quite a treat.”