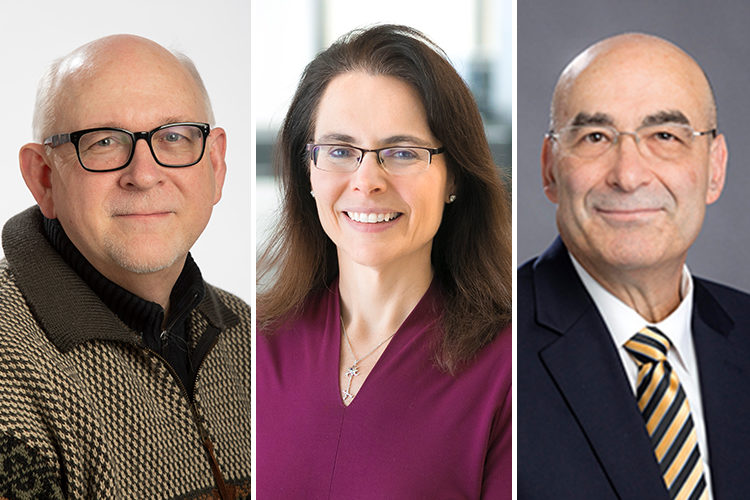 Stuart Moulthrop (from left), Karyn Frick and Simon Bronner have been named distinguished professors at UWM.

Three faculty members were recently named UWM distinguished professors by a panel of current faculty holding that title. The addition boosts the current number in this prestigious group to 27.

Karyn Frick, professor of psychology; Stuart Moulthrop, professor of English; and Simon Bronner, dean of the College of General Studies, received the designation, which recognizes their significant impact on, and contributions to, their fields of study.

Karyn Frick studies the cellular-level questions about memory formation in mammals where the effects of aging, hormones and environmental stimulation are similar to those in humans. She has done seminal work in uncovering the molecular pathways that link the hormone estrogen with specific chemical processes known to create memories, in both women and men.

Her work has shown that estrogen has a beneficial effect on a brain region called the hippocampus, which deteriorates with age or Alzheimer’s disease.

The plunge in estrogen in menopausal women is part of the reason they experience a more rapid decline in memory functioning than men. So Frick and collaborators at Concordia Wisconsin and Marquette universities have created an estrogen molecule that improves memory in an animal model of post-menopausal dementia, kickstarting new drug discovery. The work has led to a startup company called Estrigenix Therapeutics.

In 2020, she was one of three recipients of the UW System Regent Scholar Award, which recognizes individual faculty or programs that offer undergraduate research with the potential to foster innovation, entrepreneurship and talent development.

A fellow of the American Psychological Association, Frick has edited a new reference book on the role of estrogens in cognitive functioning, “Estrogens and Memory: Basic Research and Clinical Implications,” published by Oxford University Press.

Stuart Moulthrop is among a small group of pioneers in the field of electronic literature and hypertext fiction, a blend of text and interactive elements that are created digitally. Rather than going straight through a story on a single plotline, hypertext fiction gives readers choices that send them down branching paths that are navigated through hyperlinked phrases.

He has produced many critically significant works of digital writing and art, beginning with various HyperCard experiments in the late 1980s, and the pre-Web hypertext “Victory Garden” (1992), which Robert Coover described on the front page of The New York Times Book Review as a “benchmark” for electronic literature.

Two of his electronic works won the international Ciutat de Vinarós prizes, one for narrative and the other poetry, in 2008.

Many early pieces of electronic literature are only accessible using their original platforms, software that runs on an Apple IIe. To help preserve and document these, Moulthrop helped create the Pathfinders project in 2002 with startup support from the National Endowment for the Humanities.

A rebirth of hypertext fiction and poetry is happening today with help from a program called Twine, which arrived in 2009 and streamlined the hypertext literature creative process. Moulthrop is researching Twine’s impact on a new generation of electronic literature.

Simon Bronner, dean of UWM’s College of General Studies, is an internationally known scholar in folklore and material culture. He holds a professorial title in social sciences and business.

Bronner has written and edited more than 40 books on folklore, ethnology and cultural history, including three which were published in 2019 and one in 2020.

Bronner’s writings, which focus on the issues of tradition, have explored how folklore persists in an increasingly digital, social media-dominated world. His major scholarly contributions have been in the topics of consumer culture, ritual and belief, masculinity studies, American roots music, animal-human interaction, developmental psychology across age groups and ethnic studies, particularly for Jews, Pennsylvania Germans and African Americans.

Elected as a fellow of the American Folklore Society in 1994, Bronner received the society’s Lifetime Scholarly Achievement Award in 2018. His book, “The Practice of Folklore: Essays Toward a Theory of Tradition,” received the Chicago Folklore Prize for the best book-length work of folklore scholarship in 2020.