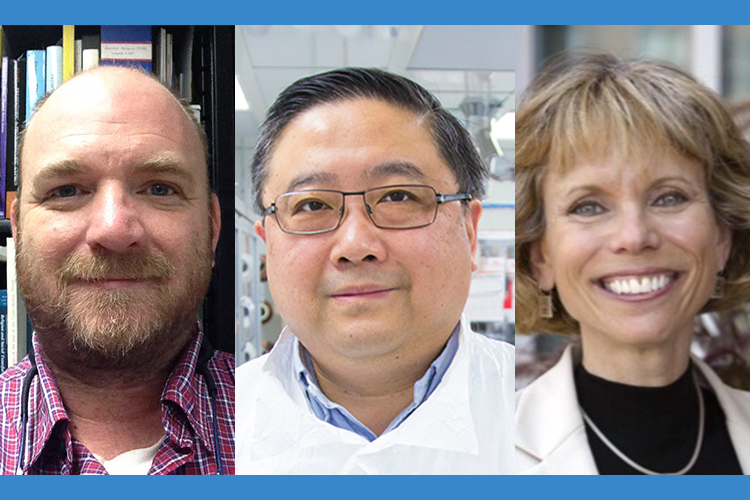 Three faculty members have been named UWM distinguished professors by a panel of current faculty holding that title. The addition brings the current active number in this prestigious group to 24.

At the pinnacle of their careers, UWM distinguished professors have had significant impact on their fields of study, remarkable productivity and international reputations.

Derek Counts is professor of classical art and archaeology in the Department of Art History in the College of Letters & Science. Funded by the National Endowment for the Humanities and National Science Foundation, he is an expert in the archaeology of Greece, Cyprus and the eastern Mediterranean and has published extensively on ancient sculpture, religion and social practice.

Counts is co-director of the Athienou Archaeological Project in Cyprus, where he has been excavating for three decades. He and his collaborators are working at the forefront of the digital turn in archaeological practice and publication. He co-edited “Mobilizing the Past for a Digital Future” (2016), which explored the impact of emerging mobile technologies in lab/fieldwork. In 2020, he co-authored “Visualizing Votive Practice: Exploring Limestone and Terracotta Sculpture from Athienou-Malloura through 3D Models,” about leveraging 3D visualization technology to provide scholarly, open access to sculptures excavated by his team in Cyprus.

On the faculty since 2002, Counts was awarded the 2020 UWM Faculty University Distinguished Service Award.

Deyang Qu is an internationally recognized energy-storage and renewable energy expert and holds the Johnson Controls Endowed Professorship in Energy Storage Research in the College of Engineering & Applied Science.

He has made important contributions to the electrochemical engineering of next-generation batteries, including long-lasting lithium-ion, lithium-air and lithium-sulfur batteries and capacitators such as those used in electric vehicles, with the goal of reducing reliance on fossil fuels.

He has contributed to the development of batteries that support “start-stop” technology, which reduces vehicle fuel consumption and carbon dioxide emissions by about 5%.

Since Qu joined UWM in 2015, his research has attracted nearly $10.4 million in grants from the National Science Foundation, the U.S. Department of Energy and industries such as Johnson Controls’ battery division (now Clarios) and MilliporeSigma.

In 2020, Qu was listed in a ranking of the top 2% of scientists in the world in a study by Stanford University, which identified top scholars by considering how often their work has been cited over the course of their careers.

Belle Rose Ragins is the Sheldon B. Lubar Professor of Management in the Lubar College of Business. She is an internationally recognized scholar in the fields of mentoring, diversity and positive relationships at work. Her research has garnered over 23,000 citations, and she is included in Stanford University’s list of the top 2% of the world’s most cited researchers.

Since joining UWM in 1998, Ragins has received multiple lifetime achievement awards from the National Academy of Management, the Center for Creative Leadership and the American Society for Training and Development. Ragins also served as editor-in-chief for the Academy of Management Review, one of the fields’ most prestigious journals. Her current research examines diversity training, the effectiveness of formal mentoring and allyship at work.