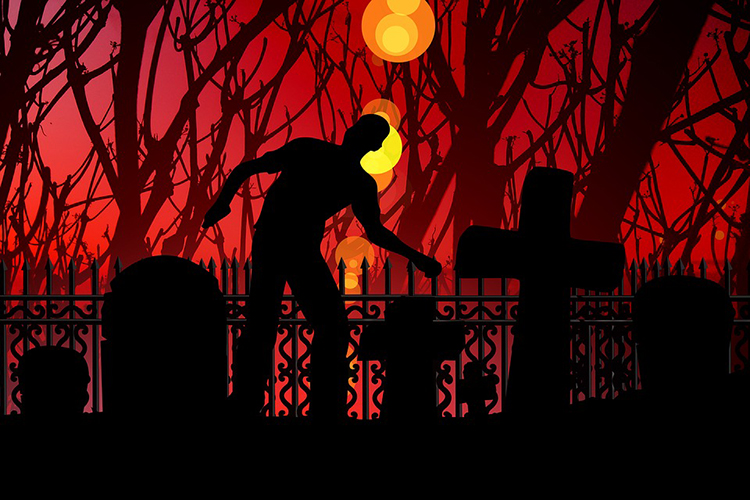 In the basement of Bolton Hall, if you listen closely, you can hear the faint sound of screams, the pop of gunshots, and the hisses and snarls of a hungry horde of rotting corpses shambling closer and closer…

Drago Momcilovic, a senior lecturer in UWM’s comparative literature program, is in his second year of teaching CompLit 135, a variable-topics course. Momcilovic’s is titled, “Zombie Metaphors.” The class takes a deep look at zombies in popular culture and what our fascination with these monsters says about society.

On the syllabus are cult classics and fan favorites, from old George Romero movies to AMC’s “The Walking Dead.”

“Folk tales are filled with monsters,” Momcilovic said. “They get us to think about what a monster shows us and what a monster warns us about. Those are the two implicit functions of monstrosity, (and) the zombie is a really specific subset of monster that is very popular today.”

The rise of zombie culture

Though they’ve changed from decade to decade, zombies are generally recognized as reanimated corpses on the hunt for food – usually human brains. Those bitten by zombies are doomed to become one. The concept has its origins in Caribbean and specifically Haitian culture; the monster grew out of beliefs surrounding witch doctors who could render a victim apparently dead and revive them as a personal slave.

The zombie has evolved since then and seems to be today’s monster of choice.

“We had vampires when I was growing up in the ‘90s,” Momcilovic remembered. “But we ran the gamut of that, and zombies made an interesting comeback. You see these different iterations all around the world – Indonesia, the Balkans, even Argentina and Japan. They’re importing different stories from Romero and American masters and authenticating them in their own cultural vernacular.”

What is driving society’s obsession with zombies these days?

“The rise of computers,” he suggested. “The zombie virus and the computer virus are hand-in-hand in a lot of ways. They’ve evolved together and they’ve defamiliarized the way we interact with people. Zombies hoard together. They act as a collective, almost like a kind of network. So all of these buzzwords like ‘network’ and ‘virus’ link these two tropes of infection.”

Moreover, he added, today people fear a global pandemic. News about SARS and Ebola outbreaks mimic many of the ways fictional “zombie outbreaks” occur as well.

The rise of the zombie class

This is Momcilovic’s second year of teaching this class. He breaks the course into three units. The first deals with the popular American canon of zombie works, starting with Romero’s “Night of the Living Dead” and other movies, and moving onto “The Walking Dead” and “World War Z,” a novel penned by author and actor Max Brooks, son of the comedian and director Mel Brooks.

The second unit examines precursors to zombies – works like Mary Shelley’s “Frankenstein,” for instance, or the 1932 film “The Mummy.” The third discusses zombies across the globe and how other cultures’ take on the monster echoes or differs from the American iteration, including the Japanese manga “I Am a Hero” by Kengo Hanazawa and the French television series “Les Revenants (The Returned).”

Really, the class is a sneaky way to teach critical and literary analysis.

“In some sense, I’m looking for the students to practice and hone their critical analysis skills, but I also want them to go beyond the mirror aesthetic response, which is to either enjoy it or be horrified by it,” Momcilovic said. “I want them to actually think about this as a representation that’s telling us something about ourselves, our culture, our society, and the many things we are very unresolved about.”

In one recent class period, Momcilovic opened discussion on “World War Z.” The novel plays like a documentary, piecing together an account of the events of a worldwide zombie outbreak. From a Russian soldier to a Japanese monk to an American politician, Max Brooks uses 43 narrative voices to outline various countries’ and cultures’ responses to fight the shambling horde.

Momcilovic questioned his students: Why is the novel structured in such a way? How do zombies provide a vehicle to discuss real-life geopolitics? How does it speak to our fears about North Korea, China, and Russia? Are there parallels to the role of mass media in the book and in our society? What is the point of describing gore in graphic detail?

“Blood and guts are a huge part of the zombie myth. Zombies are supposed to be disgusting,” he notes. “There is something about seeing blood and guts and gore that attracts, but also makes us want to look away. It’s paradoxical. The zombie exposes us to that graphic display.”

There will be tests and paper as the semester progresses, and as a final project, Momcilovic will ask his students to make their own curated creative project featuring their own favorite zombie books, shows, movies and games.

“A lot of these students are coming into the class having seen a whole bunch of other zombie movies that I’ve never heard of,” he said. “Zombie culture permeates all of these different spheres of life that these kids are interested in.”

The class has been well received.

“The student response has been very enthusiastic, but they’re also engaged,” he said. “I love that they talk back to me. It’s a formal lecture, but they feel comfortable enough to share their opinions.”

They bring their own expertise to the classroom as well; one student identified the main character Rick’s pistol in “The Walking Dead,” and how the six-shooter fit within the show’s greater context of societal evolution.

They’re also quick to grasp an overarching theme shared between dozens of zombie-related works: Humanity can often be as monstrous as the monsters they face, all in the name of survival.

“To me, the things that they do in that series are probably the most innovative and gripping, because it’s not just about the zombies; it’s about the survivors,” he said. “As the series evolves, the other survivor communities become even bigger threats to the main characters than the zombies themselves. Suddenly the world becomes very unrecognizable, and it’s not because of the walking dead.”

His students will discuss that and more as they spend the rest of the semester filling their braaaaains….