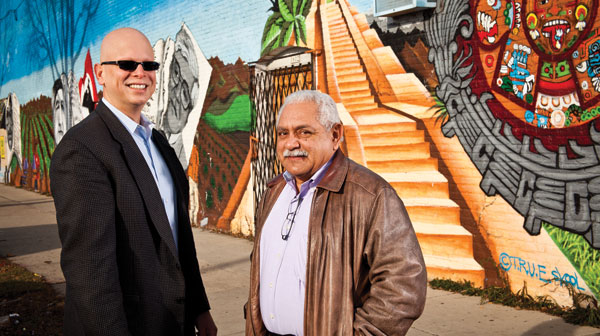 Many outsiders view Milwaukee as a Polish-German city, but a growing Latino population is adding a new element to the city’s diverse mix.

The subsequent increase in the number of Latino students fuels a need for new ways of teaching in public schools. To meet this need, UWM’s School of Education (SOE) is partnering with a community organization, the Council for the Spanish Speaking Inc., to recruit and educate teachers for bilingual and dual-language schools—where children learn in Spanish and English.

Wisconsin’s Latino population is 326,000. Tony Báez, president and CEO of the council, says approximately 34 percent of the students in Milwaukee Public Schools speak Spanish as their primary language.

“Imagine graduating from a public high school being able to speak two languages. That would certainly open up job opportunities.”

The Council for the Spanish Speaking is spearheading an effort to develop dual-language and bilingual school programs, starting on the near South Side.

With support from the W.K. Kellogg Foundation, a team of SOE faculty members is developing an initiative to recruit and prepare 180 Latino students to teach in dual-language and bilingual schools over the next 10 years. UWM was one of only six universities the foundation selected for a planning grant.

“This project recognizes Milwaukee as an urban center with a rapidly growing Latino population, and UWM’s vital role in preparing teachers for urban schools,” says Antrop-González.

Having teachers better prepared to work in dual-language and bilingual schools would be a benefit not only for those who speak Spanish, says Báez, but for students who come to public schools speaking other languages, too. It can also become a point of pride for the public schools.