Bryan Weber, a PhD student in Economics, had just finished teaching a night class and caught a ride home with UWM’s safe ride system, called B.O.S.S. – Be On the Safe Side.

B.O.S.S. provides on-demand van transportation to UWM students in order to “promote a safe environment for members of the UWM community,” according to B.O.S.S.’s mission statement.

“I turned to the person who was driving and said, ‘Do you know if this program does anything? Does it work?’” Weber said.

The short answer is yes. Yes, it does. 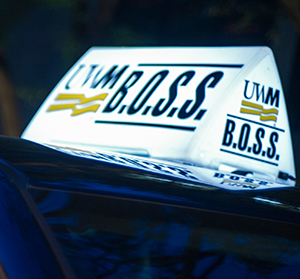 The long answer is in an article that Weber wrote detailing his findings after months of research into the effectiveness of UWM’s safe ride system. His work, entitled “Can safe ride programs reduce urban crime?” was recently published in Regional Science and Urban Economics, a top economics journal.

“Bryan’s work on B.O.S.S. was far more sophisticated than earlier research on the effectiveness of safe ride programs so I encouraged him to show it to an academic audience,” said John Heywood, Distinguished Professor of Economics and Weber’s adviser as he was completing the paper.

“The fact that he was able to publish the work relatively quickly at a leading journal in urban economics confirms the value of his contribution.”

B.O.S.S. is a safe ride service paid for by student fees and operated by the Student Services Department. Between 50 and 60 students act as drivers, and the program runs seven days a week from 6 p.m.-2 a.m. when school is in session, according to the program’s website.

When B.O.S.S. is operating, crime is about 14 percent lower.

Students can call for a ride and are picked up in the order in which they call. The van can take them to any location within the program’s service area, including grocery stores, shops and bars, though students are not allowed to transport alcohol in the van.

Weber was initially worried that B.O.S.S. could help promote illegal activity, since it does provide rides for students who are headed for bars and there is a correlation between alcohol and crime.

He was wrong – by quite a margin, as it turned out.

“I found that when B.O.S.S. is open, the crime is an awful lot lower than when it’s closed. I found when B.O.S.S. is operating, crime is about 14 percent lower,” Weber said. “So if it lowers by 14 percent, over the course of the night, you’re looking at maybe one less crime, which is really quite good. That’s a pretty big measured impact.”

UWM saw drops in both crimes against property and crimes against people during the hours B.O.S.S. was operating. Weber is now starting to investigate Marquette University’s safe ride program, which covers a smaller area than UWM’s using “Express” buses, to see if it experiences a drop in crime during operation hours similar to UWM’s.

Weber said he can’t say for certain that all safe ride programs are effective, but, “I can say that in the schools that choose to implement it, it seems to be working,” he said. “People should know that B.O.S.S. is a good program. It does keep you safer. It is convenient. And they should try and make sure that they take advantage of the program.”

Weber has lived and worked in the campus area for several years while he earned both his undergraduate and graduate degrees in Economics from UWM. He plans to finish his PhD in the spring of 2015.

“Bryan is the first student I’ve had who uses a UWM program as the subject of his dissertation research. Yet, there are many other possibilities,” Heywood said. “Economists elsewhere have studied the effectiveness of academic probation, the determinants of retention and the targeting of financial aid, among many other subjects.”