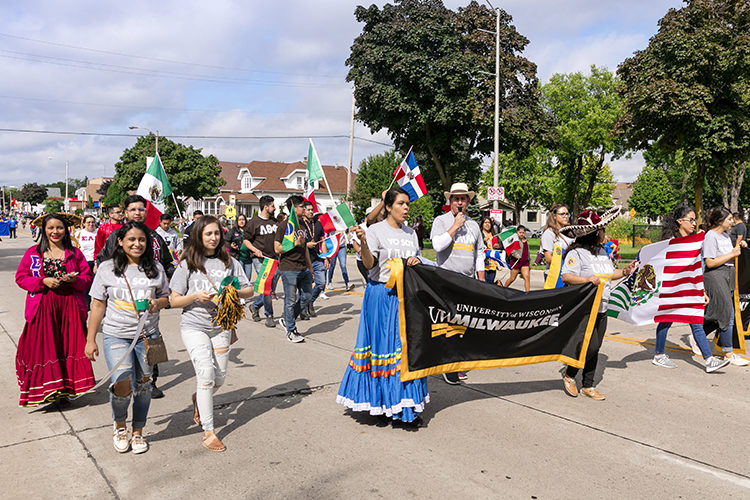 Students, staff, and faculty and members of the Roberto Hernandez Center represent UWM at the Mexican Independence Day Parade in 2019. (UWM Photo/Elora Hennessey)

On Oct. 22, the Roberto Hernández Center will celebrate its 50th anniversary with a virtual celebration combining history, community and culture. The event starts at 5:30 p.m. and will be streamed live.

The event will bring together the past, present and future of the center and the Latinx community in Milwaukee. As such, “El Pasado, El Presente y El Futuro” is the theme of the celebration, said Alberto Maldonado, director of the center.

“We wanted to look at where we’ve been – our origins – and where we are now and where we see ourselves in the next 50 years,” Maldonado said.

Many Latinx community, university and nonprofit leaders as well as past and current members of the Roberto Hernández Center will participate in the event. Guests will be welcomed by Chancellor Mark Mone and Chia Vang, associate vice chancellor and professor of history.

A focus on helping students

Students Michael Vazquez, a senior, and Tere Serna, a graduate assistant, will emcee the program.

“We did this purposely because of that is what the center stands for – students,” said Maldonado.

Representing the past will be Jesús Salas, a former UW System regent, who took part in the founding of the center. Felipe Rodriguez, one of the directors of what was originally called the Spanish Speaking Outreach Institute, a retired School of Education advisor and well-known local musician, will provide musical interludes.

The center will honor the role women have played in the community and at the university with two awards to female leaders. Graciela de la Cruz was a student in 1970 who became a Milwaukee Public Schools teacher, and is depicted on a mural celebrating Latinx history that was installed on the south side in 2017. The late Marla O. Anderson was one of those who took part in the protests that led to the founding of the center, and was the only woman among the five protesters who were arrested.

Alumna Andrea Lozano will talk about how the center’s emergency financial aid support helped her finish her degree. “Helping students find financial support is an important part of the work we do here,” said Maldonado.

Heidi Anoszko of the library will give an update on an oral history project that is part of the 50th anniversary celebration. A video by videographer Marcelo Martinez, a UWM alum and employee, will feature cameos of others involved in the center’s history.

Fifty years ago UWM had only a handful of Latinx students. One student commented at the time that “All the Latino students out of 25,000 could sit at one table.” Few administrators or advisors spoke Spanish; there was no support center for Latinx students, and there was no means of transportation to the Kenwood campus.

As of fall 2020, UWM now has 2,340 registered Latinx students, 12.4% of undergraduates. Events like an annual open house (Casa Abierta) are held in Spanish and English, numerous cultural events celebrate Hispanic culture and accomplishments throughout the year, and the center contributes to research and provides regular advising, emergency financial aid and other support services for students.

Seven years ago, the university created a committee to support DACA (Deferred Action for Childhood Arrivals) students as they prepare for their futures. These are approximately 300 undocumented students who qualify for temporary protection from deportation and legal work authorization for a renewable period of two years.

In addition, the center is helping the university work toward receiving recognition as a Hispanic Serving Institution.

A brief history of the center

The Roberto Hernández Center grew out of the university’s Spanish Speaking Outreach Institute, established in 1970 after a confrontation between community activists and the university.

In the late 1960s and early 70s, Milwaukee’s Latinx population was growing along with interest in education.

Although the Latinx community was vibrant in Milwaukee, with more than 30,000 living in the city at the time, the scourge of unfair housing practices, unemployment and under-representation in academic settings affected the people, according to the center’s website.

UWM was viewed as a whole different world by Latinx leaders at the time, wrote UWM History Professor Joseph Rodriguez in his “Latinos at UWM: A History of the Spanish Speaking Outreach Institute and the Roberto Hernández Center.”

“Their suspicion of the university reflected the fact that the UWM administration and faculty was almost exclusively white men, most of whom lived on the East Side near campus and who had little or no contact with members of the Latino community. Few served on South Side boards or community organizations. None had taught a course in Latino studies. The physical separation between the campus and community impeded understanding and trust.”

Things came to a head in August 1970 when a group of students and community activists, frustrated at the perceived lack of response by the university to their requests for change, staged a sit-in at the chancellor’s office in Chapman Hall. Five members of the group were arrested.

The protest at UWM was one of the earliest protests by Latinos on any campus in the Midwest, according to Rodriguez’s history.

William Quiles, a participant in the sit-in, later recalled:

“People were marching outside (Chancellor Martin Klotsche’s office), carrying the Mexican and

Puerto Rican flags, symbols of nationalist fervor and our ethnicity. There were kids, grandmothers, mothers, revolutionaries, agency people and Anglo friends, who were interested in our cause.”

That initial protest was a community affair. Klotsche commented that Black students at UWM pushed for the creation of the Afro-American Studies program, but that the whole Latino community participated in the protests and sit-ins.

In November 1970, the university officially created  the Spanish Speaking Outreach Institute. The institute was renamed the Roberto Hernández Center in 1996, honoring one of the leaders of the  protests. Hernández was one of the most active Latino leaders in the city of Milwaukee during the 1960s, was one of fewer than a dozen Latinos enrolled at UWM in the 1970-71 academic year.