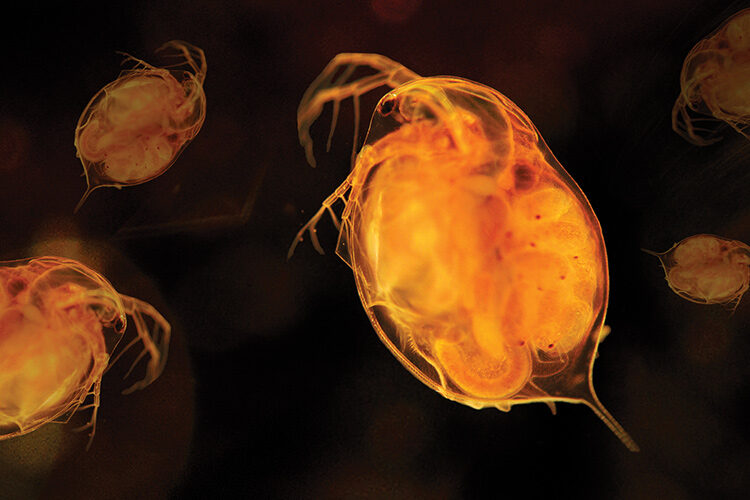 Part of Rebecca Klaper's research involves studying how daphnia - the very small zooplankton shown in these magnified images - are affected when they ingest the even smaller nanomaterials that inevitably end up in the environment.

When the weather warms up, many Americans like to head to the water to cool down. For people living in the Midwest, that could mean spending some time on the Great Lakes. Whether it’s to take a few hours to go fishing, take a sightseeing cruise or just lounge at a beach, Lake Michigan and the rest of the Great Lakes are national treasures.

They’re also the largest freshwater ecosystem in the world. For scientists like Rebecca Klaper, the Great Lakes are a living, interactive resource and classroom to conduct research that contributes to efforts to keep the lakes clean. Klaper is vice dean and a professor in the School of Freshwater Sciences.

On this episode of Curious Campus, UWM’s podcast about science, discovery and culture, we talk with Klaper about her research into nanomaterials, which are miniscule particles made of various chemicals that are incorporated into various products including cosmetics, medicine, food and car batteries. They’re also constantly shed into the environment, including rivers and lakes. How do these nanomaterials affect organisms that live in the Great Lakes and the Great Lakes ecosystem?

We’ll also learn more about the School of Freshwater Sciences, which is the only such school of its kind in the United States. Below, Klaper answers some questions about the school and her work. Listen to the full show at WUWM.com or on your favorite podcast app.

What are the freshwater sciences?

It’s kind of a catch-all term for a lot of different areas of research. It could be anything from the amount of freshwater resources that we have available for drinking and human use. It could be issues related to the health of freshwater ecosystems and how does the contaminant load affect organisms in those freshwater systems, and affect humans that rely on those systems for fishing, drinking, swimming and other kinds of activities.

In our school, it also involves policy. We have economic and policy folks that tell us how valuable this freshwater resource is to the human population. What kinds of regulations and incentives do we need to put in place in order to protect those resources so that the things that we value about them stay in place for a long period of time?

We are using a more global approach because there are so many important issues that are related to this resource that we all rely on for life that go beyond just the ecology of our freshwater.

Nanomaterials are a particular type of emerging contaminant that are particulates. Most chemicals you think of as being able to be dissolved in water or oil. But these are actually particles that are floating around, and they’re being used in a wide variety of chemicals. But the unanimous thing is that they’re all in this particulate form. And the reason why that’s important is they’re … less than 100 nanometers in size — so, smaller than a red blood cell.

At that size, the surface area of the particle is really large, and so they’re really reactive compared to their larger counterparts. They have a lot of surface to have those reactions, and they’re being used for everything from your computer screens and televisions to medical devices, as well as medicines where we’re using them for tracking particular things in the human body or for drug delivery systems. They’re being used in agriculture for fertilizers and pesticide delivery devices.

Your work has been described as “essentially exploring the idea of building safer chemicals.” What do you mean by that?

There are all sorts of ways where these things could get into the environment. And so what we’re trying to do, I’m part of this Center for Sustainable Nanotechnology, which is based at UW-Madison, but really, it’s a string of about 13 universities across the country. I happen to be the investigator here at UWM. What we’re trying to do is say, “OK, these nanomaterials over here are having a negative impact on plants, fish, algae and other things. Could we redesign them?”

Through that center, also one of the things that’s going on is looking at how we could develop nanomaterials to best be used in agriculture again, so they aren’t toxic. Maybe it would allow us to decrease the amount of fertilizer that would be used on a field or the amount of pesticide that might be used on a field. You don’t have to use so much because you’re using a small amount that gets targeted to particular places in the plant. So basically having that design concept in mind when we create these materials instead of evaluating toxicity later.