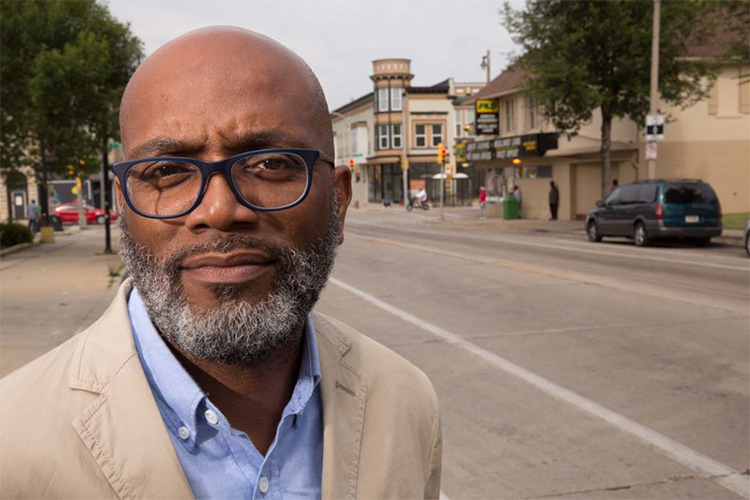 David Pate, associate professor of social work, has been exploring the Black Lives Matter movement in the classroom and in his research. "I just want a conversation to begin between people who are open to listening to one another and not screaming at each other," Pate says. (UWM Photo/Troye Fox)

David Pate, professor of social work, has been exploring issues of race, gender and class, particularly the impact of social welfare policy on black males, for the better part of 20 years.

Last spring, Pate offered the course “#BlackLivesMatter: An analysis and critique of the movement” to students in the Honors College. He will teach a similar course next spring that will be open to all UWM students. (The UWM Student Association is hosting an appearance by two of the founders of the Black Lives Matter movement on Oct. 13.)

Pate shared his personal views on the Black Lives Matter movement as a citizen, a teacher and a black American man.

How would you characterize the Black Lives Matter movement, as an objective observer? Or as a scholar?

I view it as a human rights movement. In my opinion, the movement is seeking recognition of the challenges that black Americans face in the areas of environmental injustice, food insecurity, mass incarceration and gender justice, to name a few that are affecting black Americans.

People are saying, “We want to be recognized as part of American society in the same way as everyone else is.”

It’s much more than a policing issue, though that started the discussion because of the police shootings of unarmed black men. But the people who started the Black Lives Matter movement wanted a broader discussion of the human rights of black Americans.

When you look at the basic issues of food, shelter and clothing, and the access to liberty and the pursuit of happiness, it is important to recognize that historically black Americans have been denied access to wealth and equality by federal and state public policies in this country.

On a more personal level, what does Black Lives Matter mean to you as a black man in America?

I’m a father, uncle, husband and godfather, and I wonder about the safety of my daughter and nieces, my son, godson and nephews. Having “the talk” about interacting with the police is a real issue for me. Personally for me, for my family, it’s an everyday worry, that my children are safe and make the right decisions.

That’s a reality of any black parent — that their child will be perceived as someone not following the rules, and end up having an “unfortunate” experience with the police.

In my role as a teacher, I believe it is my responsibility to provide information on Black Lives Matter from both conservative and progressive positions. I encourage discussions on the topic with students in a safe environment. Ultimately, it is their decision on how they are going to use this information to better their lives and the lives of their fellow citizens. A university provides the space for that really rich discussion on very complex issues, and right now race, gender and class in America is a primary topic of discussion in the context of social welfare policy.

What’s your response to the “All Lives Matter” argument?

It is my opinion that those active in Black Lives Matter are requesting recognition of the disparities faced by black men and women.

Let’s have the real conversation about why those differences exist.

So, in this context, let’s talk about the community reaction to the recent police shooting of a black man in Milwaukee.

But that’s been gone for some time, and I do really think that Milwaukee is at the tip of the iceberg right now. When you observe the amount of poverty and despair people have had to deal with for a number of years – not just for four or five years – I’ve looked at poverty in this city for over 25 years, and it’s not gotten better. Incarceration rates are higher. There aren’t enough employment opportunities for youth or their adult parents.

We’re not really examining some of the issues of justice or access to justice. And in many cities in this country people are just going to get frustrated and fed up.

You mentioned incarceration rates. Together with questions about policing, the racial element in criminal justice is certainly fraught.

I think it’s unfortunate that we’re blaming solely the police. What I mean by that is this is both an institutional issue and a systemic issue.  It’s the job of the police to maintain civil order and civility within society.  Now, that institution has some issues of race and oppression, and that’s real.

But the police are working for a society that has broader issues overlaying that. You can’t blame the cops for the chronic absence of well-paying jobs.

And beyond that, we need to treat people who have criminal records as citizens. We seem to have decided that if you’re a criminal you are someone who should be punished for the rest of your life. And unfortunately that has fallen primarily on people who happen to be of color, particularly black and brown people.

We generally try to be a forgiving society, but for some reason we just don’t get there when there’s an intersection of race, gender, class and criminal background.

What is your hope for the Black Lives Matter movement?

I just want a conversation to begin between people in America who are open to listening to one another and not screaming at each other. We need to recognize there’s a problem we’re facing in our country around race. It’s a longstanding problem that requires big solutions but also real conversation.

And I do see these conversations occurring in some universities, community groups, on podcasts, on blogs, etc. And even more broadly entertainers, sports figures and the police are engaging in the conversation.

We need to go into the conversation with an open mind and be honest about what we’re talking about. Unless we communicate with one another, nothing’s going to change.