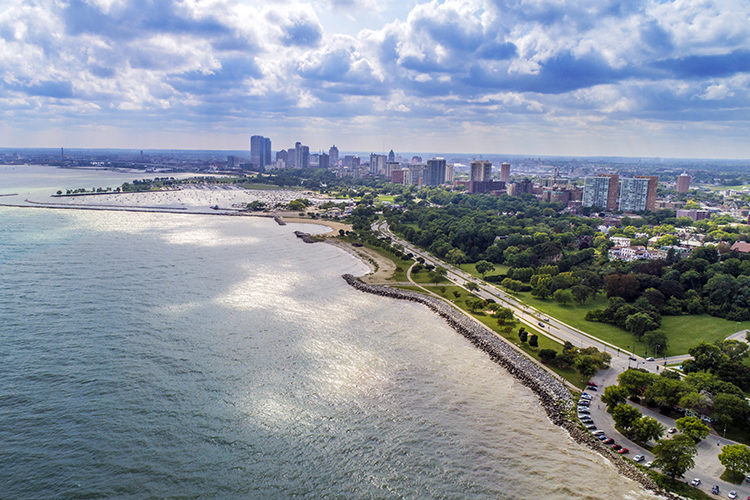 Drive down Lincoln Memorial Drive on the Lake Michigan shoreline to view a lasting legacy of socialism in Milwaukee.

The lakefront parkway boasts some of the most scenic vistas in town, along with access to beaches and marinas. But when built in the 1920s during the tenure of Socialist Party Mayor Daniel Hoan, the vast public works project was viewed as more than just a way to add open space and transit options.

“Another goal was to reduce unemployment by enabling people to support themselves through work rather than relief or private charity. Reducing unemployment also increased wages, which was related socialists’ support for organized labor,” said Aims McGuinness, an associate professor of history.

“Socialists saw that by providing public employment, they could increase demand for labor in the market overall, and that would benefit all workers,” McGuinness said.

“Our lakefront is accessible to everybody,” said Joel Rast, an associate professor of political science and director of urban studies in the College of Letters & Science.

“A lot of people don’t know that – they think that sort of just happened by accident,” Rast said. “But that was public policy that was driving that, and it was the Socialist presence that played a big role in that in Milwaukee.”

A desire to provide access to parks and recreation areas wasn’t limited to the lakefront.

Milwaukee’s park system grew under the influence of Charles Whitnall, who was elected city treasurer as part of a Socialist sweep in municipal elections in 1910, according to the Encyclopedia of Milwaukee. Whitnall also served on the county park commission and the city’s public land commission.

In 1923, Whitnall released plans for a countywide system of parks and parkways that would lay the groundwork for the current Milwaukee County Parks system. Parks were located along the county’s periphery near rivers, rolling hills or woodlands to offer a remedy to the downside of urban life.

Many of those same parks remain today, accessible by two-lane parkways and serving mainly suburban neighborhoods. The Trust for Public Land ranked Milwaukee 28th among the country’s 100 largest cities in 2019 for park access and quality.

“Milwaukee is famous for its parks,” McGuinness said. “That was part of a very deliberative effort by Socialists, who really believed that everybody in the city of Milwaukee, including poor people and working class people, should have access for recreation and opportunities for health.”