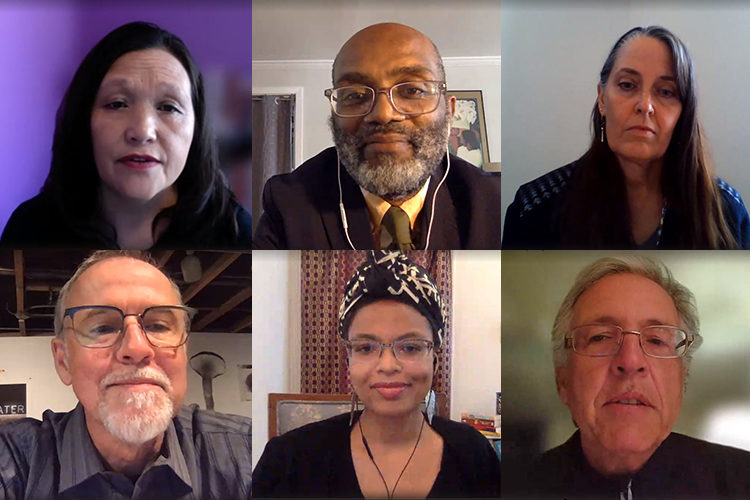 What do we need to do better as a university in response to the racial injustices that led to the widespread civil unrest touched off by the death of George Floyd in police custody?

A panel of faculty members discussed the multiple and complex issues involved on Friday in a Campus Dialogue on Racial Justice, held virtually via Microsoft Teams. (The session was recorded and can be viewed in Teams.)

Panelists talked about their own experiences as well as the responses of their families and their students not just to current events, but to the historical and ongoing issues that underlie the protests. They also explored ideas about how to move forward as a university.

Asked to consider her thoughts when she first heard about the killing of Floyd, Anika Wilson, associate professor and chair in the Department of African and African Diaspora Studies, said, “There was a feeling of ‘Here we go again’… It gave me a sinking feeling in the pit of my stomach.”

But the protests were heartening, she said, because people were making their voices heard.

“I went from a feeling of despair to a feeling of, ‘OK, this is something else we can do right now,’” Wilson said.

The issues aren’t just about police misconduct, but also the unchecked violence against black people fostered by ‘stand your ground laws’ and media depictions of protesters as thugs and looters, she added.

David Pate , associate professor and chair in the Department of Social Work, said he was feeling anger, sadness and frustration. He sees the larger picture of the economic inequities black students face as a result of centuries of systemic injustice.

“We tout diversity, but we don’t understand the lives of our black students” who have been affected by poverty and the unequal impact of unemployment and health care disparities, Pate said. He also sees the daily needs of black students who may be sleeping in their cars, scrambling to pay bills or even buy lunch. The university needs to do more in providing financial support to students, he said.

Black people were brought to this country 400 years ago and have helped build America’s wealth, but have not participated in it, Pate said. A black college graduate has less wealth than a white high school dropout, he noted.

Young people give them hope, the panelists said.

“If we have hope it is because of these younger generations,” Wilson said.

Joseph Rodriguez, professor and chair in the Department of History, mentioned that his own children were taking part in protests, and how he’s learned more about racial injustices even from his own students. He mentioned one of his doctoral students, Steven Anthony, whose dissertation examined the 1919 Elaine race riots in Arkansas, and as a result, Rodriguez learned more about this area of history.

Margaret Noodin, professor of English and director of the Electa Quinney Institute, said some of her students asked her how to say “Black Lives Matter” in Ojibwe, and her daughter posted it on Instagram to share with other young people.

In teaching, faculty can provide open space for discussion in classes and can be candid with students, said John Lane Hall, professor and upcoming chair in the Department of English.

“We all need to unlearn our own biases and be willing to be a little uncomfortable,” Hall said.

Faculty do this because they are passionate about their work, Wilson said, but suggested these extra efforts need to be recognized as much as teaching and publishing in promotion and tenure discussions. Pate added that giving professors a discretionary fund – above and beyond existing university financial supports – would make it easier for those like himself who often have to dig into their own pockets for these emergency requests.

In closing remarks, Chancellor Mark Mone stressed the importance of faculty telling the truth and being candid about dissatisfaction with areas that need improvement. He  reiterated that UWM needs to increase efforts in anti-racist education, recruitment, retention and support of black students and faculty. He added, “We need to acknowledge we are not doing enough.”

The goal of the discussion was to create space for dialogue about the issues taking place in our community and nationally and explore ideas for moving forward, according to panel moderator Chia Youyee Vang, associate vice chancellor and professor of history.