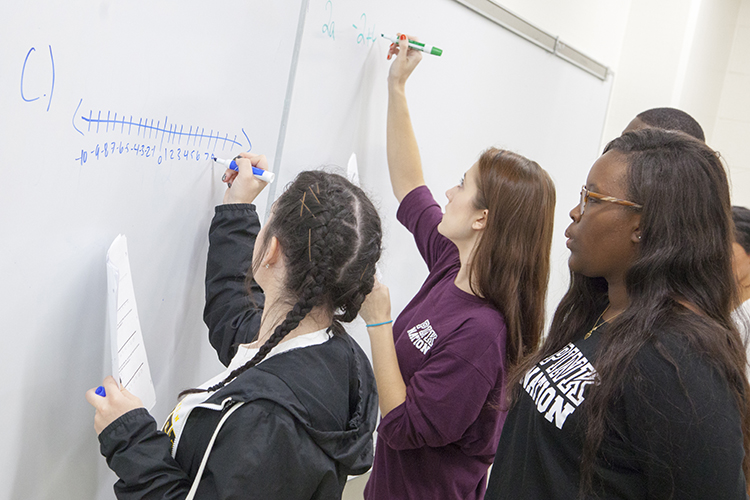 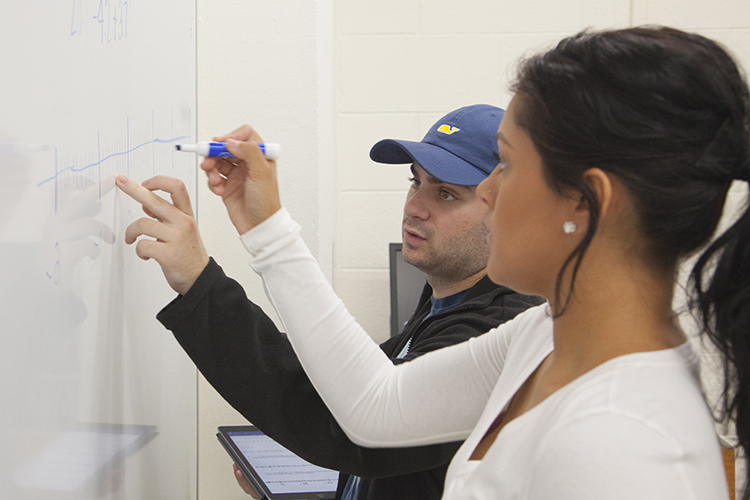 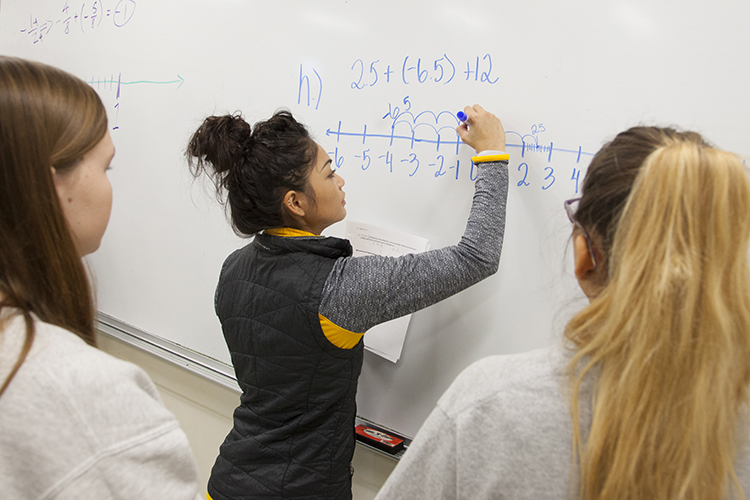 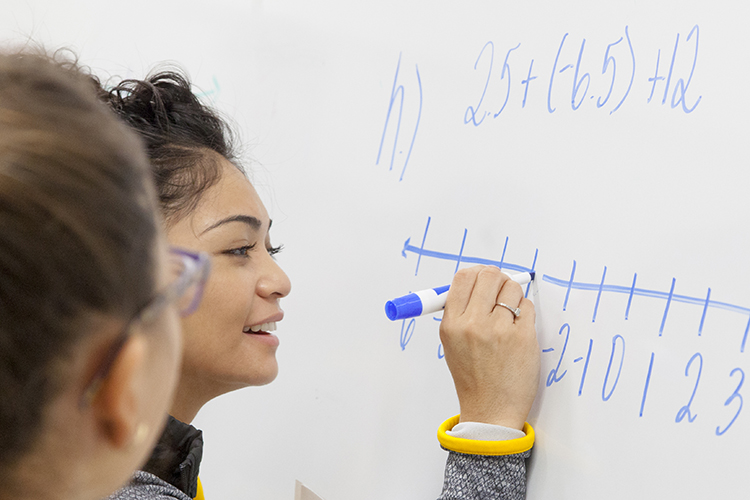 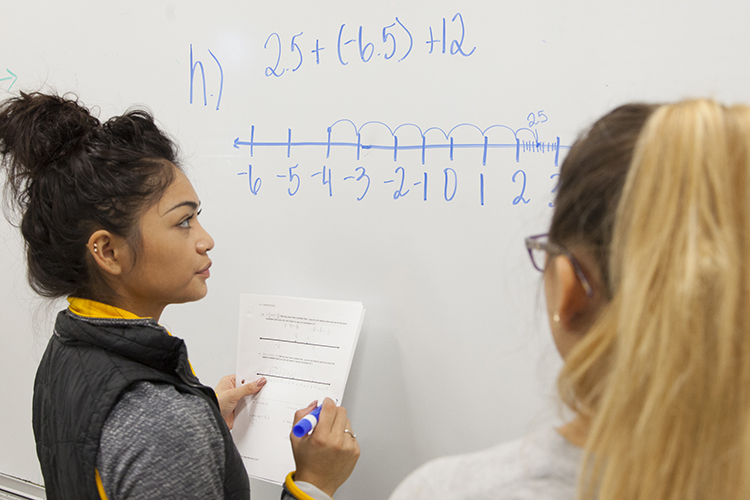 Twice as many University of Wisconsin-Milwaukee students are completing needed remedial mathematics twice as fast.

Those are numbers that add up to improving lives.

As a result of a new approach, more UWM first-year students are staying in school and the achievement gap between minority disadvantaged students and others is closing.

Kyle Swanson, a professor of atmospheric sciences who led the Developmental Math Reform project for the Department of Mathematical Sciences, said the reorganization of these courses is allowing students to start taking courses for credit sooner. This particularly benefits minority disadvantaged students, who often enter college with weaker math skills and need to take remedial courses, he said.

With the new courses, students are completing their needed remedial work in two semesters rather than three, according to Swanson. The changes have also improved students’ performance once they get to the for-credit courses.

At UWM, 30 percent of all students and 40 percent of underrepresented students fail to return for a second year. Math anxiety and the length of time it takes to complete enough math coursework to earn credit have been major stumbling blocks to student success, according to Swanson.

His preliminary research findings show that for new freshman minority students entering at the lowest math placement level in fall 2008, 2009 and 2010, a total of 250 completed math remediation in their first three years at UWM. That three-year total has already been surpassed by those who entered in fall 2014, with 252 completing needed work.

Overall, the difference between the traditional developmental math program and the new program introduced in fall 2014 is significant. In fall 2012, 38 percent of students placed in remedial courses were able to take a credit-level math course their first year. In fall 2014, 67 percent of these students were able to take a credit-level course their first year. And, this was accomplished without lowering department standards, Swanson emphasized.

Two new courses are designed to accelerate the completion of remedial work and allow students to focus on content important to their career and academic goals.

Students are happy, too. Alex Roach, a first-year film student in his 30s, had taken a math class at UW-Rock County before transferring to UWM in spring 2015, but had otherwise been away from math courses for 20 years. Math 94 (one of the developmental courses) “was tough, but it was really just what I needed.”

Roach is now in Math 103, a credit course, and has found Math 94 has already started to help him in ways he never expected. “I’m no longer intimidated by it (math), which is huge. I’ve actually found fun in math, which is something I never thought I’d say,” he said.

Lindsey Maslov, a current Math 94 student, likes the fact that the class is every day. “It goes at a pace that’s slow enough that I’m able to really concentrate and get it. The teacher (Leah Rineck, senior lecturer) is really great at what she does.”

The courses succeed because they take a different approach to teaching mathematics, Swanson said. “The traditional math lecture is the instructor speaking and writing things down on a board, with the students being observers. But math is not a spectator sport. Students have to actively participate to learn.”

To make the courses more interactive, classwork was reorganized and teachers learned new ways of encouraging classroom participation. For example, students prepare ahead for class sessions rather than listening to a lecture and then doing homework. Students might watch a lecture online, answer questions and do a few problems as a preview of the next class. Then, when they get to class, they have to be prepared to put up a problem on the board and explain it to others.

“That forces the students to explain what they did to their classmates,” said Swanson. “That puts them in the position where they have to learn it well enough to teach it.”

Maslov enjoys trying out the problems ahead of time and collaborating with classmates. “I like that we are able to try it on our own. Then we all work on it and fix what we did wrong.”

Another change is to move students away from “procedural activities,” where they have a sample problem or a framework and fill in numbers, said Swanson. Instead, they are learning to figure out the framework themselves. “One of the things we really emphasize is the concept of productive struggle – that it’s okay that they don’t know the answer or don’t know how to get to the answer right away,” Swanson said.

The changed approach has also involved training instructors – 80 percent of whom are lecturers – to learn ways of encouraging interaction.

Students work through problems using ALEKS, an artificial intelligence program that allows instructors to regularly evaluate how students are doing and where they may need help. Maslov said she proud of the fact that she’s actually working ahead on the online ALEKS program. “I enjoy math. I’m finally able to stay on track and understand it.”

The new approach is encouraging students to continue their math studies. Enrollment in the next level course, Applied Calculus, is up 20 percent, according to Swanson.

“We want them to understand the math culture – why people study math,” Swanson said. “They may decide it’s not for them, but they can see why some people choose careers in math.”

And the courses are helping students overcome math anxiety. Roach said he used to set up all his bill paying online so he didn’t have to struggle with the numbers. “Now I’m actually enjoying math.”