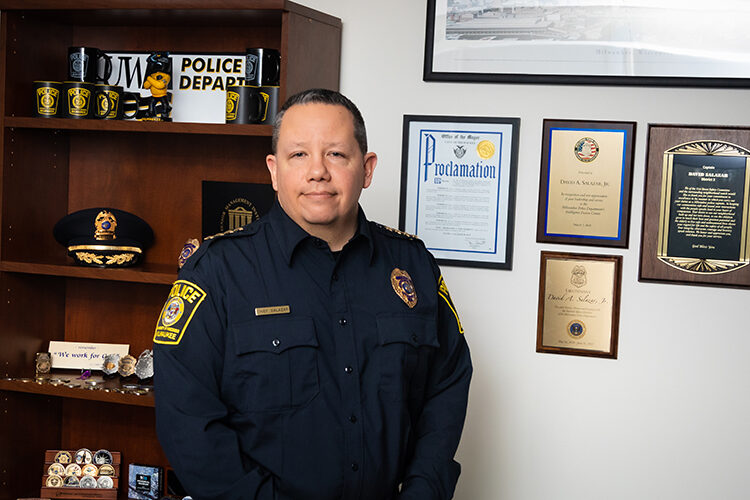 Policing has changed in the two decades that new UWM Police Chief David Salazar Jr. has worked in law enforcement. “Today, 95% of what we do is conflict resolution and problem solving and the other 5% is enforcement,” he said. (UWM Photo/Elora Hennessey)

Over his 26 years in law enforcement, David Salazar Jr. has seen the focus of police work change to community policing. That’s an approach he wants to continue at UWM.

“There’s really been a great transition in policing over the last 10 years to really engage people at an authentic level,” said Salazar, who became the new UWM police chief at the beginning of December, replacing Joseph LeMire.

Before coming to UWM, Salazar was commanding officer for the Milwaukee Police Department’s Second District on Milwaukee’s near south side. In that position, his focus was on community policing, building community trust in the district’s diverse neighborhoods, while working to reduce violent crime.

One example of the community outreach he started there was the Barbershop Talks series, bringing officers together with young people to talk about issues of concern, including reckless driving and gun violence. He also worked to establish trusting relationships between the police and the area’s Hispanic, Black and LGBTQ populations.

“I think those types of experiences will help me serve our campus community well.”

He came to UWM, he said because he wanted to do something in policing that was a little bit different but still used his skill set and experience in leading teams of people.

“The idea of going to a university within the community I’ve been policing for two and a half decades was really appealing,” said Salazar. “I felt it would not be an easy transition, but a do-able transition.”

Salazar started his law enforcement career as a patrol officer with the Milwaukee Police Department, moving up through the ranks into a variety of leadership positions. During his career, he earned a bachelor’s degree from Concordia University and a master’s degree from Bowling Green State University in criminal justice. He has also taken part in the FBI’s Executive Leadership Institute as well as other law enforcement leadership and training.

At the Milwaukee Police Department, he worked with the university on events such as the visit of Hillary Clinton. In five years as head of the MPD’s Intelligence Fusion Center, which uses data and analysis to support policing, he also worked closely with the university. In fact, he hired a number of UWM alumni as analysts for that department.

“All my interactions with the UWM police department and UWM overall were always positive,” he said. “UWM is such an asset to the city.”

While the demographics of a mostly young population at the university are different than those in District 2, he sees some similarities in the way the police interact with the people the force serves.

Threatening situations can develop on campuses, including rare situations like active shooters. Campus police need to be prepared and ready to deal with those type of critical situations at a moment’s notice, Salazar said.

However, most police work now requires a different approach. “Today, 95% of what we do is conflict resolution and problem solving and the other 5% is enforcement,” Salazar said. “There are various ways of doing conflict resolution – listening to people, understanding their challenges and helping them find the best possible solution.”

That may take more time and patience than more a traditional policing approach, which made action imperative. In MPD, Salazar trained and served as a crisis negotiator. He remembers one incident when he perched high on a cold, windy 35th Street viaduct talking to a young man who was suicidal, eventually getting him to come down from his place on the top of the guard rail. “He said, ‘you’re the first person who really listened to me.’”

Young people who are away at college may need support in making good decisions, Salazar said. That requires close contact among police, the Dean of Students Office, human resources and others working to help students adjust to college life.

“Young people who are away from home for the first time may make mistakes. For the most part, that means they are exploring what it means to be an adult.”That’s OK, within limits, he said, but they also need to be aware of things that represent serious threats, such illegal drug use.

“We really need to stress to young people that the decisions they make could be life-changing or life-ending,” Salazar said. “When you look at a prescription drug, you can look at the bottle to see what’s in it or know it’s FDA approved. When you get it from a drug dealer or even a friend, you don’t know for sure what it is. You’re really trusting this individual who is selling you something that could kill you.”

Getting to know people

In his first few weeks at UWM, Salazar met with the university’s Police Community Advisory Committee, as well as deans and administrators, to get to know them and get their input on issues. He said he looks forward to working with the committee and using its input to shape the department’s priorities and enhance its service to the UWM community.

Any changes he makes will be well thought out, he said.  “I’m not going to have a knee jerk reaction, changing something immediately.”

He also will be putting a focus on officer wellness, helping them deal with the daily stresses of the job.

The department is planning for a review of policies and procedures as part of preparation for an upcoming accreditation. Salazar will also be meeting with neighborhood groups to let them know he’s available if they have concerns.

“I’m still learning a lot, but I’m really excited about this job and the responsibility that the chancellor and vice chancellor have invested in me. I will do everything I can to make this school as safe as possible and as welcoming as possible.”